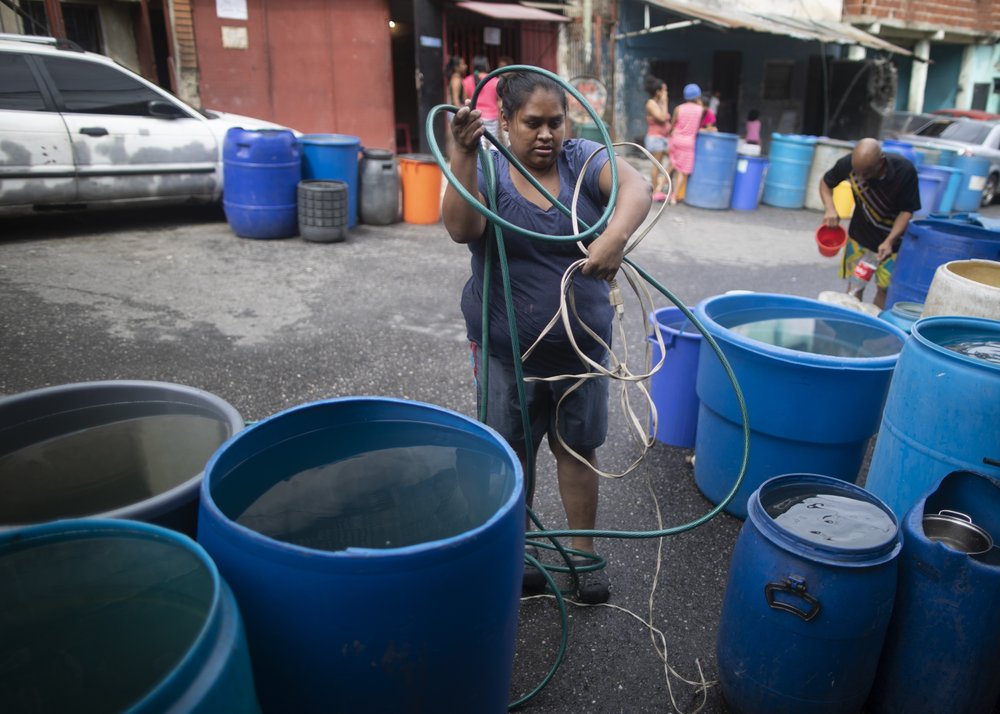 CARACAS, Venezuela (AP) — Venezuela’s economic collapse has left most homes without reliable running water, so Caracas resident Iraima Moscoso saw water pooling inside an abandoned construction site as the end of suffering for thousands of her poor neighbors.

Workers had long ago stopped building a nearby highway tunnel through the mountain above them. Yet, spring water continued to collect inside the viaduct and then stream past their homes, wasted. The construction firm had also left behind coils of tube.

Moscoso, 59, rallied her neighbors to salvage the materials and build their own system, tapping into the tunnel’s vast lagoon and running the waterline to their homes. Today, they’re free of the city’s crumbling service and enjoy what many in Venezuela consider a luxury.

“Everybody here has water,” said Moscoso, seated on the stairs of her hillside neighborhood of cinder block homes. “We all benefit.”

Venezuela’s water crisis is nothing new, but it’s started driving residents to extraordinary measures — banding together to rig their own water systems and even hand dig shallow wells at home. Water today is even more important as a way to protect against the pandemic.

Critics of the socialist government blame chronic infrastructure failures on years of corruption and mismanagement that have also left the electrical grid fragile and destroyed Venezuela’s once-thriving oil industry.

An estimated 86 percent of Venezuelans reported unreliable water service, including 11 percent who have none at all, according to an April survey of 4,500 residents by the non-profit Venezuelan Observatory of Public Services.

María Eugenia Gil, of the Caracas-based non-profit Clear Water Foundation, said residents have no other choice than to hunt for water, breaking a nationwide quarantine that was imposed to slow the spread of the new coronavirus. They’re exposing themselves to illness or possibly spreading the virus to others, she said.

“They don’t have an alternative,” Gil said. “You can’t stay at home locked inside if you don’t have water.”

President Nicolás Maduro’s government has accused political foes of sabotaging pump stations, and recently celebrated the purchase of a fleet of 1,000 “super tanker” trucks from China to deliver water to residents.

That’s no solution for Arcangel Medina, 66, who recruited young men in his neighborhood to dig for five days, striking water at a depth of four meters (13 feet). He bought US$200 worth of pipes and an electric pump so he can share the water with other homes.

“We went four months without running water,” said Medina, complaining that when city lines used to flow every two weeks, dirty water spewed from his faucets.

“It’s a blessing,” said Medina, one of a dozen residents in his sector who took the drastic measure. He next had to figure out how to get rid of the dirt pile on the street in front of his home.

Moscoso, who proudly organized her neighbors to build their own system, estimates that 5,000 people in her neighborhood now have water. It started flowing in May, said Moscoso, who works at the mayor’s office.

Their above-ground water line starts at the abandoned tunnel’s mouth and runs 1,000 meters (3,200 feet) — under a highway, strung from power poles over a city street and down to their homes.

Four other neighborhoods have run similar lines from the tunnel.

Moscoso said the water is perfectly safe, drinking down a glass as proof. She declined to say how much it cost them after salvaging the abandoned pipes, claiming she hasn’t had time to add up the expenses.

“For me it’s priceless,” Moscoso said.

Image: A woman untangles an electrical cord and a hose in order to pump from a large container water provided by a government tanker truck, in the Petare slum of Caracas, Venezuela, Wednesday, June 10, 2020. Venezuela’s water crisis is nothing new, but water today is even more important due to the new coronavirus pandemic. (AP Photo/Ariana Cubillos)