Facebook Twitter LinkedIn
Nefertiti disappeared without a trace 3,000 years ago. Could the long-lost Egyptian queen be just the other side of a wall?
The journey to uncover the discovery of the century begins up Egypt's Nile — tucked away in a valley outside Luxor.
The heat is relentless: the sun god, Aten, punishes those who dare to enter, with temperatures exceeding 100 degrees Fahrenheit (38 degrees Celsius).
But what lies beneath these white limestone cliffs could eclipse Howard Carter's discovery of Tutankhamun, Egypt's most famous pharaoh.
Another British archaeologist, Nicolas Reeves, believes that Queen Nefertiti's final resting place is tucked away in a hidden chamber inside King Tut's tomb.
Reeves' theory, published in a report last August, rocked Egyptologists around the world. But the mystery surrounding the queen begins more than three millennia ago.
Nefertiti ruled Egypt alongside her husband Amenhotep IV. Her not-so-modest name means "a beautiful woman has come." But after reigning for 12 years she vanished. Some Egyptologists believe she became co-regent under a new name, while others believe she may have died.
Reeves and a group of experts entered Tutankhamun's burial chamber this week. On the Pharonic timeline, Tut is considered a minor king. He died at 17, but his fame is derived from the fact his resting place was found largely intact.
Descending into the bowels of his tomb, one instantly notices it is rather small and unimpressive compared to the grandiose tombs of his neighbors in the Valley of the Kings. 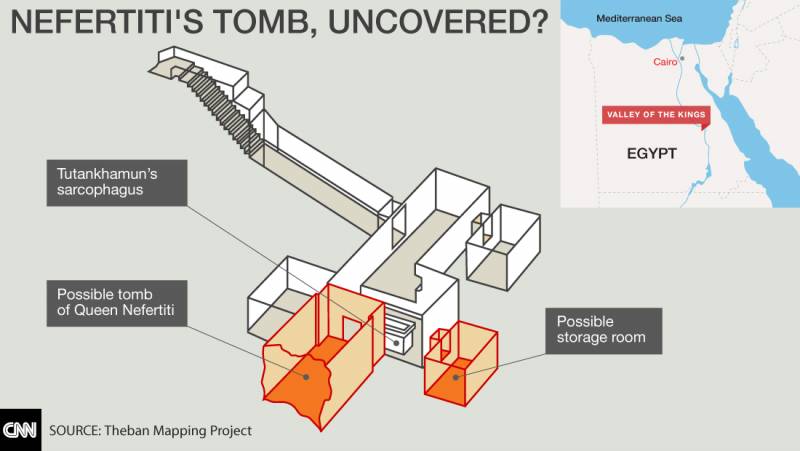 "I had no preconceived notion that Nefertiti was buried here. To be honest, for some time, I fought the conclusion because it seemed so extraordinary," says Reeves. "But that is where the evidence seems to be pointing."
It is the far wall of the chamber that has drawn Reeves' attention.
The first clues are the simple but vivid hieroglyphics adorning the yellow walls. One section depicts what appear to be a mummy and a pharaoh.
Reeves explains that the subtle details in the artwork are similar to the depictions of Tut and Nefertiti in other works.
"My feeling is this is a tomb, originally made for a queen, which was adapted for the burial of a queen who had become a pharaoh," says Reeves. "The pharaoh (dressed as a mummy) in question looks to be Nefertiti and the person burying Nefertiti appears to be Tutankhamun."
But Reeves also says the depictions are a distraction, camouflaging the real evidence that there is more to this tomb. Ultimately, it's the science that enhances his theory. Last year a Madrid-based art restoration specialist published high-resolution images of King Tut's tomb.
In the scans, Reeves spotted cracks in the walls which could indicate that two previously unrecognized "ghost" doorways lay behind.
"Without all this distracting color you can see all sorts of things. You can see lines that indicate corners of cut walls, and these are the things that I noticed first," says Reeves. "If I'm right, this is simply part of the entrance to the tomb of Nefertiti. The tomb, I think, continues beyond this wall. There will be a burial chamber beyond there."
To prove his theory right, Reeves wants to use radar and thermal imaging to scan the tomb and differentiate between bedrock and the artificial walls.
Even if he finds a hidden passageway, that doesn't mean that digging will begin immediately.
"We must find a way to protect the tomb of Tutankhamen," says Egyptian Antiquities Minister Mamdouh El Damaty. "Does that mean we will dig from above, below or from the side? We don't know."
Despite the note of caution in his voice, Damaty is as excited as Reeves at the prospect of solving this ancient mystery.
"When we find Nefertiti, I think it will be more important than the discovery of King Tutankhamun himself," says Damaty.
But, he says, King Tut had many women in his life, and if a new tomb is discovered, it could easily belong to one of them.
"I hope we find Nefertiti but I doubt it. I can't say it's a big probability," says Damaty. "It could be Nefertiti, it could be Kia (Tutankhamun's alleged mother), it could be other members of the family of Tutankhamun. Let us wait for the results at the end."
A definitive answer isn't expected anytime soon. But both Damaty and Reeves agree that if proved correctly, King Tut will be dethroned, his resting place forever known as the Tomb of Nefertiti.
Tags
burial tomb King Tutankhamun Queen Nefertiti 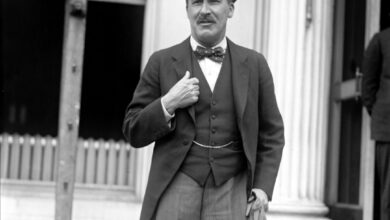 The 100th Anniversary of Howard Carter in Egypt