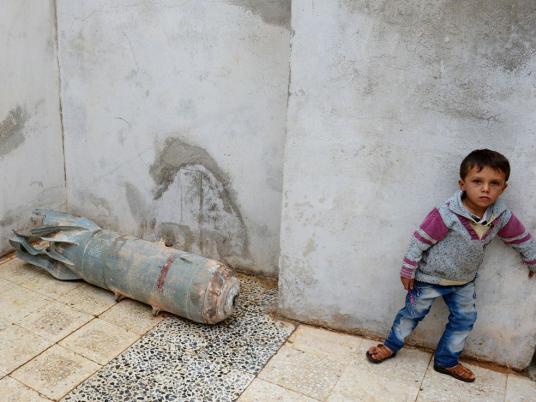 Syria's newly named opposition leader, a soft-spoken cleric backed by Washington and the Gulf Arab states, launched his quest on Monday for international recognition of a government-in-waiting to topple President Bashar al-Assad.

Mouaz al-Khatib, a former imam of a Damascus mosque, flew to Cairo to seek the Arab League's blessing for a new assembly, the day after he was unanimously elected to lead it. He made a concerted effort to address the sectarian and ethnic acrimony underlying 20 months of civil war that has killed 38,000 people.

"We demand freedom for every Sunni, Alawi, Ismaili, Christian, Druze, Assyrian … and rights for all parts of the harmonious Syrian people," he said, calling on Syrian soldiers to desert and all sects to unite.

His new Syrian National Coalition for Opposition and Revolutionary Forces received the endorsement of the six Sunni Muslim-ruled kingdoms of the Gulf Cooperation Council as the "legitimate representative of the Syrian people."

Washington also promised to back the new body "as it charts a course toward the end of Assad's bloody rule and the start of the peaceful, just, democratic future."

In signs of the serious danger of the 20-month conflict spreading across the region, Monday saw a surge of violence at two frontiers. Israel fired shells from across the line separating Syria from the Israeli-occupied Golan Heights, while Syrian warplanes bombed a rebel-held town on the Turkish border.

Rebels and opposition politicians formed Khatib's new opposition coalition after days of wrangling in Qatar under intense US and Qatari pressure.

Backers hope the new body will give rebels inside Syria more clout and reassure religious and ethnic minorities, after a Syrian National Council (SNC) made up mainly of exiled Islamists proved ineffective as the main opposition voice.

Western and Arab opponents of Assad want the coalition to attract support from minority sects who had been alienated from the opposition by the prominence of well-organized Sunnis from the Muslim Brotherhood. They also hope to rein in Islamist fighters, some of whom they believe are linked to Al-Qaeda.

"Khatib is a dynamic, progressive Islamist, popular in Damascus and the rest of Syria," said Mazen Adi, a prominent Syrian human rights defender who worked with Khatib before the revolt. "He is not a trigger-happy Jihadi, and he can play a role in containing the extremist groups."

"The most important thing that could come out from (Monday's) meeting is a form of recognition for the new Syrian council alliance that was established in Doha," said one Arab diplomat, speaking before the talks on condition of anonymity.

A League official said any recognition of the opposition would probably avoid describing it as the sole legitimate representative of the Syrian people, because some Arab states were still reluctant to jettison Assad altogether.

"There are still Arab states like Iraq and Lebanon that are not fully supportive of the Syrian revolt," the official said, also on condition he not be identified.

Khatib, in his early 50s, was jailed several times for criticizing Assad before fleeing into exile this year. He has long promoted a liberal Islam tolerant of Syria's Christian, Alawi and other minorities.

Hassan Hassan, a Syrian commentator based in the United Arab Emirates, said Khatib, as an independent cleric, would be a counterweight to growing influence of the Muslim Brotherhood.

"He's been active for a long time, campaigning against the idea of retribution and extremism. He talks about liberty and freedom for the masses. So he is perceived as a credible figure," Hassan said.

Russia, which with China has foiled UN action on Syria and views Assad's opponents as pawns of the West, urged the new body to negotiate and to reject outside meddling.

The escalation of violence over 20 months in a country allied to Iran and bordering Iraq, Israel, Jordan, Lebanon and Turkey, has raised the prospect of wider regional war.

Israeli tanks fired shells into Syria and scored "direct hits" in response to a Syrian mortar round that struck the Golan Heights, the Israeli military said.

It was the second time in two days that Israel has responded to what it said was errant Syrian fire. On Sunday the military said it had a fired a "warning shot" across the disengagement line, while on Monday it said it had fired back at "the source."

Syria and Israel have not fought over the Golan since the 1973 Middle East conflict, but are still formally at war. Israel captured the Golan from Syria in 1967 and later annexed it in a move not recognized internationally.

At the northern end of Syria, government jets and helicopters attacked the rebel-held town of Ras al-Ain, with some bombs landing just meters (yards) from the Turkish border, sending scores of civilians fleeing into Turkey.

A Reuters reporter on the border near the town, which fell to the rebels on Thursday, said one warplane flew right along the frontier and appeared to stray across it at one point, as bombs sent up plumes of black smoke.

The Syrian Observatory for Human Rights, a pro-opposition group that tracks the violence from Britain, said 12 people, including seven Islamist militants, had been killed in strikes on Ras al-Ain. Another opposition group put the toll at 16.

The observatory said 140 people were killed in Syria on Sunday. More than 38,000 people have died since March last year.

Turkey, whose border security worries were heightened by a sudden influx of 9,000 refugees within 24 hours last week, has consulted its NATO allies about possibly deploying Patriot surface-to-air missiles to deter Syria's air force.

It remains to be seen whether the coalition can succeed where the exiled SNC failed in overcoming mutual suspicion and in-fighting that weakened the opposition.

"This is a significant step forward, because they finally seem to be forging a more broadly-based platform that includes the SNC but without the SNC taking the lion's share," said Salman Shaikh, director of the Doha Brookings Center think tank.