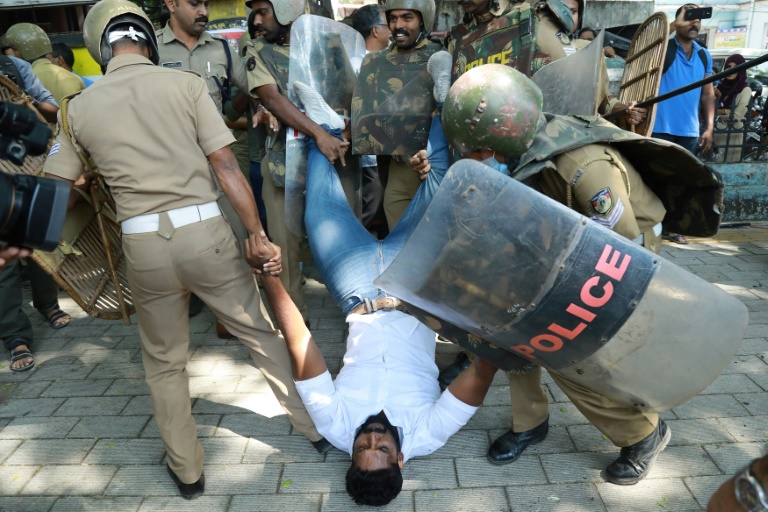 The Sabarimala temple in Kerala state has been at the center of a prolonged showdown between religious hardliners and authorities since September, when India’s top court overturned a ban on women aged 10 to 50 setting foot inside.

Police said unidentified attackers hurled a homemade bomb at the home of a politician from the rightwing Bharatiya Janata Party (BJP) and set ablaze the office of its Hindu nationalist parent group Rashtriya Swayamsevak Sangh (RSS).

Both are opposed to the court’s order to allow women inside the temple.

No injuries were reported, police said.

The fresh attacks came hours after unknown attackers bombed the house of a politician linked to the state’s ruling Communist Party, which has vowed to implement the court order.

One person has died and more than 270 others have been injured since Wednesday, when thousands protested after two women devotees in their 40s prayed inside the temple.

The two local women had become the first to access the shrine since the landmark verdict and months-long of siege by Hindu hardliners that forced dozens of women devotees to retreat from the gold-plated hilltop temple.

A third woman from Sri Lanka said she entered the temple on Thursday night but this was disputed by the temple authorities, who performed a “purification” ritual after the two other women made their way into the shrine.

More than 3,000 protesters have either been arrested or taken into preventive custody after multiple clashes between police and demonstrators.

Kerala has a history of political violence between Hindu and the left-leaning parties but tensions in the region have escalated since the women entered the temple on January 2.

Prime Minister Narendra Modi, a member of the BJP, joined calls by his party and the RSS for a statewide shutdown to protest the women’s entrance.

Hindu groups believe that women of menstruating age should not enter the temple because they are “impure” and the temple deity, Ayyappa, was celibate.

The Communist Party has accused the BJP and RSS of inciting violence in the state.

Women are barred from a handful of Hindu temples in India, including Sabarimala, where it was considered a taboo for centuries before the ban was given legal force by Kerala High Court in 1991.

But the Supreme Court in a landmark judgement in September overturned the Kerala court’s ruling after six women lawyers petitioned it in 2006, challenging a ban they said violated their fundamental rights.

Tradition, and mobs, keep women out of Indian temple