Some places take much of their beauty from their secluded location, far from the bustle and noise of city life. Whether they are world famous or well-kept secrets, they manage to maintain that sense of peacefulness that makes them special, providing a soothing balm for the soul.

Wadi al-Hitan (Valley of the Whales), located 150 km southwest of Cairo, is definitely all of the above. In addition, it is a site of huge scientific importance, being home to prehistoric fossils that help put one’s own existence into perspective.
Located in the desert near Fayoum, the paleontological site was designated a UNESCO World Heritage Site in 2005. The whale fossils discovered there were instrumental in developing our understanding the evolution of these huge sea creatures. The fossils have been in place for millions of years, and scientists believe that it was the specific climate conditions of the area that preserved them so well. 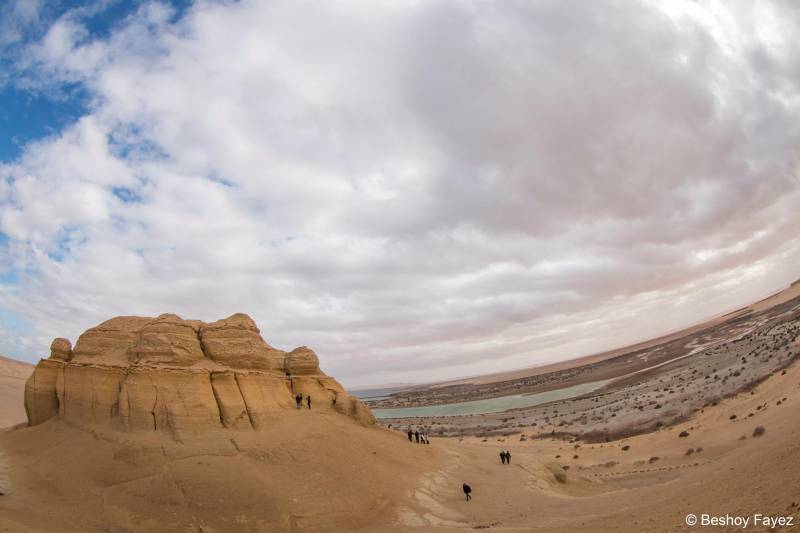 While many people – scientists and tourists alike – visit the site each year, one Egyptian photographer went along with his own particular mission in mind. Beshoy Fayez, known for his use of the super-wide fish-eye lens, was keen to capture the beauty of the place on camera, adding it to his collection of key travel locations in Egypt and abroad.

What he found there didn’t disappoint: a vast, open sky; fine, golden sand; strange geological formations of compacted sand, weathered over millennia; and hidden among them, numerous fossils, evidence of long-dead ecosystems.

One of the curious sand structures that dot the landscape 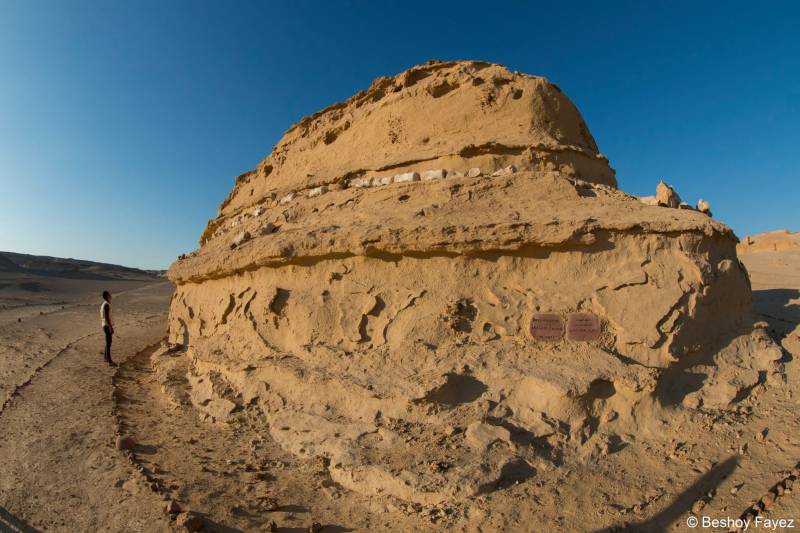 Whale fossils embedded in a sand structure, left in place to help preserve the site.

“Because there isn’t as much light pollution as in Cairo — or any at all really — what is truly remarkable about the place is the stars. So bright and big! I couldn’t believe how beautiful it was,” Fayez recounts.

Star-gazing is assisted by the camping facilities at Wadi al-Hitan. Most visitors spend a few hours here and return home or to hotels. But those wishing for a deeper experience head for the little campsite up in the hills, warm and protected from the wind. Renting a large tent and a sleeping bag for about LE25, they spend the night in the bosom of nature. 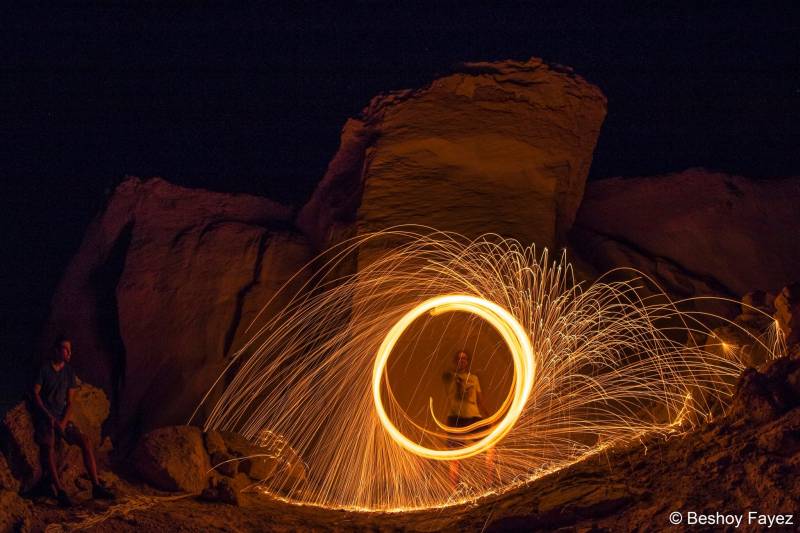 The Wadi al-Hitan campsite at night.

In such circumstances, star-gazing is pretty much unavoidable, and Fayez took the opportunity to capture some stunning celestial images. Setting his camera up on a tripod, he left the shutter open while the night sky moved across the horizon, leaving a mesmeric circular swirl in sand-colored tints. 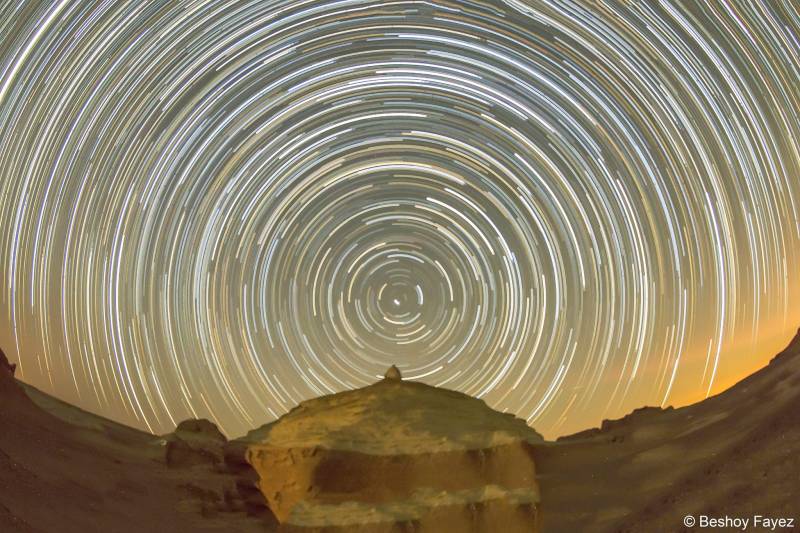 Fayez says the atmosphere allows one to think, bringing home the benefits of seclusion in nature, living proof of the maxim “less is more”. There are no paths leading to the site and up until the 1980s, when 4×4 vehicles started to become popular, the site wasn’t visited too often. Today the valley attracts mostly tourist visitors although there are rarely more than 1,000 each year, which means the place is still pretty quiet even on a busy day.

Perhaps the chief attraction, at least for the scientifically minded, is the Fossil and Climate Change Museum, which displays several full-body fossils of whales found in the area. Scientists have put forward various theories on how they came to be here, with some suggesting that millions of years ago, the ocean extended into what is now the desert surrounding Fayoum. Others say the creatures arrived on foot, since the fossils that were found indicate that these age-old whales had feet and were land animals before taking to the water full-time.

The Fossil and Climate Change Museum

Because the valley is a protected area, there are hardly any of the amenities one normally finds at tourist attractions. Fayez explains that there is one single cafeteria on the site, but they make delicious food, such as a traditional Egyptian breakfast, complete with the layered pastry called feteer meshaltet, whole cream, jam and honey. They also will roast a sheep over a fire for the visitors, boosting the already homely atmosphere provided by the campsite. 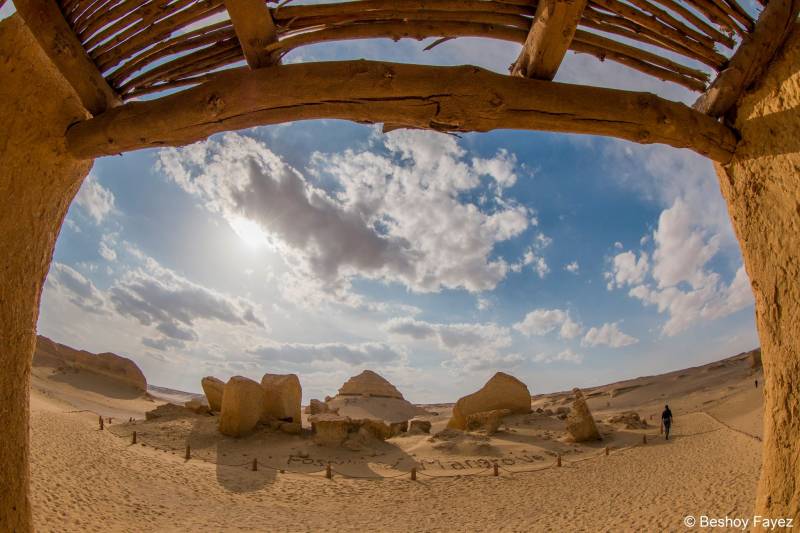 Fayez has taken his fish-eye lens to a number of countries, seeking to capture the best of each destination — from the warmth and passion of Spain and Tunisia, to the quaint charm of Holland and the fresh natural beauty of Norway. His photographs have attracted much attention in Egypt, where an Egyptian’s photographer’s impression of the wider world sparks interest.

A keen amateur photographer, Fayez started experimenting with the fish-eye lens in 2006 while attending a peace conference in Tokyo. In 2011, he held an exhibition at the Goethe-Institut in Cairo under the title “The Spirit of Liberation”.

Then, in 2012, he launched a project to document the beauty spots and tourist sites of Egypt, partly in the hope of drawing attention to them, but also as an exercise in developing his skill with the lens. Since then, he has expanded the idea to the four above-mentioned nations, but he always returns home to continue the project of documenting Egypt.

The trip to Wad al-Hitan is a fine example of his art, lending a slightly different (and much wider) angle on a well-known location, highlighting its beauty and charm — but with a dash of the unusual.