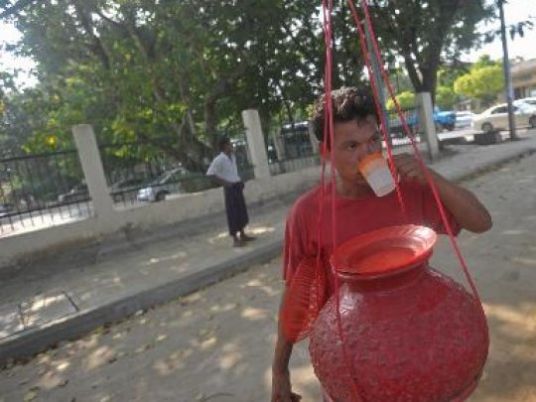 Every morning on his way to work in Yangon, builder Zaw Min Tun takes a swig of water at a Buddhist temple, a vital place to quench a thirst for the many ordinary citizens left behind by Myanmar's economic boom.
Bottled water is among the plethora of consumer industries set to take off as the country emerges from decades of isolated junta rule, putting more money in the pockets of the country's rich and a growing middle class.
But, at around 300 kyats (25-30 US cents) a litre, it remains too pricey for the majority of people in a country where the average annual per capita income of US$1,105 remains one of the lowest in Asia.
Decades of weak investment under junta rule means the vast majority of people — eight in 10 — are forced to drink from unsafe supplies such as wells, boreholes, springs and streams while only nine percent have access to tap or piped water.
Poor infrastructure combined with the high prices of bottled water mean many locals like Zaw Min Tun rely on the terracotta jars of water left by kindly strangers at the many Buddhist temples across the country.
"This is where I have to wait for the bus," he tells AFP under a baking hot sky outside the temple in downtown Yangon. "And when I'm thirsty I take a drink."
On the other side of Myanmar's consumer boom, adverts for purified water cover billboards and the sides of delivery trucks in Yangon and other cities, pushing aspirational and wholesome messages.
"With Alpine, live longer and healthier," says the slogan of market leader Alpine, a local company which produced 200 million bottles in Myanmar last year, and projects to churn out 300 million by the end of 2015.
Purity matters
Myanmar's bottled water market is, as yet, far from saturated.
In 2013 consumption of bottled water per head stood at just 0.1 litres, according to a 2014 report by researchers at Euromonitor International, compared with 21 litres in the Asia-Pacific as a whole.
Nestle is among the international companies that have circled the market for water, although the Swiss food and drink giant has shied away from major investment so far.
"This business has a great future. As people get richer, the middle class has more expectation," Sai Sam Htun, CEO of Lo Hein Company, which owns the Alpine brand, told AFP.
For the country's newly minted middle class, such bottlers offer a sense of security in what had been, until recently, a notoriously unreliable cottage industry.
"Previously, there were a lot of small players, they did not care about water treatment," Sai Sam Htun added.
"They just got it from underground or from the pipe from the city water. They treated it very lightly."
Concerns over poorly purified water became such an issue that in February the Ministry of Health banned more than 70 brands after spot checks showed they failed basic safety tests.
Fenton Holland, an Australian specialist who has helped Western drinks companies and hotels access safe water supplies in Myanmar, said businesses are becoming aware they need access to safe water.
"Even when you make potato chips you need high-purity water," he said.
Herculean task
Decades of economic mismanagement under the brutal junta has left Myanmar with a creaking and decrepit infrastructure and the water supply is no exception.
According to national census figures released this month, only 31 percent of inhabitants living in cities consume purified water in some form, falling to just two percent in the countryside.
Even in Yangon, the nation's economic heart, wells and ponds are a common water source for the city's seven million inhabitants, especially outside of the center.
On the city's western outskirts, far removed from the construction cranes and car dealerships of the city center, Thein Ham, 51, fills up some water jars on the side of the street.
Bottled water "is for other people. My mother did the same thing," she explained.
On paper, Myanmar should not lack for fresh, drinkable water.
As a tropical country boasting three mighty rivers, it is annually soaked by life-giving monsoon rains, although the dry season often brings brings drought due to poor management.
Revamping the country's infrastructure is a Herculean task, even in a city like Yangon.
French firm Egis has been commissioned by Yangon's authorities to come up with a plan to rehabilitate thousands of kilometers (miles) of water pipes under the city.
"These pipes have to be cleaned and repaired," explained Marion Hasse, a project coordinator for Egis. "Most of the pipe network is between 50 and 70 years old."
She estimates that the center of Yangon could see safe drinking water delivered via taps within five years, but for the whole city, it could take more like two decades.