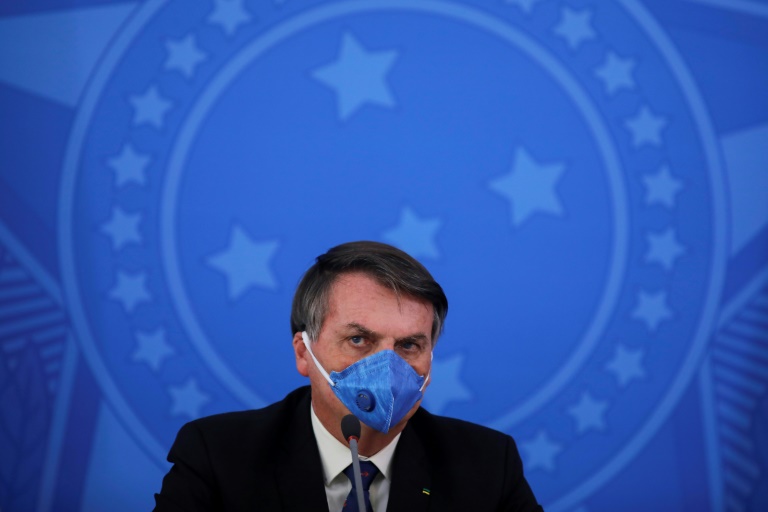 On April 22, Brazil was fast becoming a new coronavirus flashpoint, but President Jair Bolsonaro and his cabinet barely mentioned the pandemic in a video-taped meeting that has triggered outrage and fueled a potentially explosive investigation.

Indeed, one of the few mentions of COVID-19 in the video — released Friday as part of a probe into whether the far-right president obstructed justice by firing the federal police chief — was when the environment minister said the government should take advantage of the distraction created by the pandemic to relax the country’s environmental protection rules.

Littered with obscenities, insults, tirades and potentially incriminating statements, the video triggered outcry in Brazil, where many questioned the government’s policy-making amid a pandemic that has killed more than 22,000 people in the country.

“It’s two hours full of swear words and delirium, derision and disrespect for the country. Brazil is going through its worst crisis in decades, and the president never mentions the pandemic as a problem that concerns him,” wrote respected columnist Miriam Leitao in newspaper Globo.

“The absence is shocking.”

In the video, Bolsonaro rails against the federal police for failing to give him information and says, “I’m not going to wait for them to fuck my family and friends.”

Bolsonaro denies trying to stifle investigations, and said the video proved the accusations against him were a “farce.”

Analysts generally agreed the video, which was released by Supreme Court Justice Celso de Mello, did not contain a “smoking gun” to incriminate the president.

However, other material contained in the nearly unredacted footage could prove just as damaging to Bolsonaro, who faces growing disapproval ratings 18 months into his four-year term.

Bolsonaro called two state governors a “piece of shit” and “pile of manure” for defying him by imposing coronavirus stay-at-home measures.

His education minister called for the Supreme Court justices to be thrown in jail for giving states the final say in the matter.

His women’s minister said governors and mayors should be arrested, too.

Turning to diplomacy, his economy minister called China “that guy you just have to put up with” because it is Brazil’s biggest export destination.

Brazilian media counted 39 swear words in all, including 31 by the president, and there was widespread condemnation from commentators, opposition parties and civil society groups of the meeting’s tone.

“It showed the vulgarity of the current government. They are like barbarians throwing the country into chaos, disrespecting the law and ignoring the constitution,” Congressional opposition parties said in a joint statement.

“The Bolsonaro government wasn’t made to govern. It’s a militant government that’s here to implement a conservative agenda, not run the country,” he said.

The meeting may be most damning for what it does not contain.

The cabinet did not have a single policy discussion on how to handle coronavirus in Brazil, which now has the second-most infections in the world, behind the United States.

“The only minister to mention COVID-19 was the environment minister.”

And that mention generated a firestorm of controversy.

Environment Minister Ricardo Salles says in the video, “Now that the media’s only talking about COVID, we need to use this moment of calm… to change all the regulations.”

That was widely taken as a call to open protected land in the Amazon rainforest to mining and agriculture — something Bolsonaro has aggressively pushed — though Salles said Saturday he meant only that the government should try to cut red tape.

Environmental protection advocates were not buying that argument.

“It became clear that the role of the environment ministry is to dismantle any environmental protection we have in the country,” said Erika Berenguer, an Amazon ecologist at Oxford and Lancaster Universities, who joined groups such as Greenpeace and the World Wildlife Fund in condemning Salles’ comments.

Image: AFP / Sergio LIMA Brazil’s President Jair Bolsonaro wears a face mask during a press conference on the coronavirus pandemic at the Planalto Palace in Brasilia