Al-Juhara Sajer is a 25-year-old lifestyle and makeup vlogger from Saudi Arabia.

With nearly half a million subscribers on YouTube, Sajer is part of a media revolution that has seen the Kingdom achieve the highest YouTube watch time per capita of any country in the world, according to analytics agency Tubular Labs.
In a country where movie theaters are illegal and music concerts are seldom permitted, young Saudis are increasingly relying on social media for entertainment.
More women, in particular, are using YouTube to express their views — their videos have become so popular that consumption of female-related content in the Kingdom increased by 75% since last year, according to Google.
As a result of this surge in Arabic content on YouTube, watch time has increased not only within the Kingdom but throughout the entire Middle East and North Africa region.
Peter Salisbury, associate fellow of the Middle East and North Africa program at the Chatham House think tank, tells CNN that Saudi Arabia is at a unique juncture where citizens — particularly the elite — are pushing the boundaries of socially conservative norms.
And YouTube, it seems, is providing them with the perfect platform.
Saudis on YouTube
Most of the female vloggers CNN spoke to admitted to initially being hesitant about appearing on camera — some still won't reveal their face.
"At the beginning I was afraid to appear on screen … it was rare for a Saudi girl to appear on social media platforms and talk about things, [but] with time the fear disappeared, thanks to my family's support," Hessa Al Awad, another influential Saudi vlogger, tells CNN.
In the make-up tutorials Al Awad posts, she sticks to Saudi convention by wearing the niqab. Despite the fact she's never revealed her face, her subscribers continue to grow.
Cooking vlogger, Amal Elmziryahi, who was born in Morocco but is based in Saudi Arabia, also generally refrains from revealing her face.
"[I] decided to stick to recording my voice while filming my hands as they did the work," she tells CNN. "I thank god that people liked my channel despite my face not appearing in my videos."
Hatoon Kadi, on the other hand, has become the face of female comedy in the Kingdom with more than 313,000 subscribers.
"I just seized the opportunity, [because] female perspective is lacking," she tells CNN, adding that it was important to her that her video content never offended anyone.
"I will never insult anyone [and] I will never talk about sensitive issues like religion or politics, it's not me. So we just keep to the social issues," she says.
Lifestyle and comedy vlogger Njoud al Shammari, 21, reveals her full identity, and in doing so has exposed herself to criticism for being a woman on YouTube, she says.
"I was attacked by those around me to the degree that my brothers lost some of their friends," she tells CNN.
But clearly there are others who support her posts.
In one year on YouTube, she's attracted more than 890,000 subscribers and Tubular Labs recently listed both her and Sajer among the top five most influential Saudi female YouTubers.
"[YouTube] gives me the power to have a voice, not only to express myself but also express what (other women) need and what they feel (needs) challenging … in our society," she says.

Saudi Arabia is a 'dynamic society'

The rise of Saudi women on YouTube coincides with the nation's ambitious "Vision 2030" program, which promises a wave of cultural reforms to diversify the kingdom's oil-dependent economy.
With more than half of the Saudi population below the age of 25, Deputy Crown Prince Mohammed bin Salman has been at the forefront of efforts to radically transform the Kingdom, particularly as chairman of Saudi Arabia's Council for Economic and Development Affairs.
Bin Salman says he envisions Saudi Arabia to be a "tolerant country with Islam as its constitution and moderation as its method."
Under "Vision 2030", there will be more than 450 registered amateur clubs for cultural activities by 2020 — earlier this year the kingdom allowed its first major concert in almost seven years — and female participation in the workforce should increase from 22% to 30%. 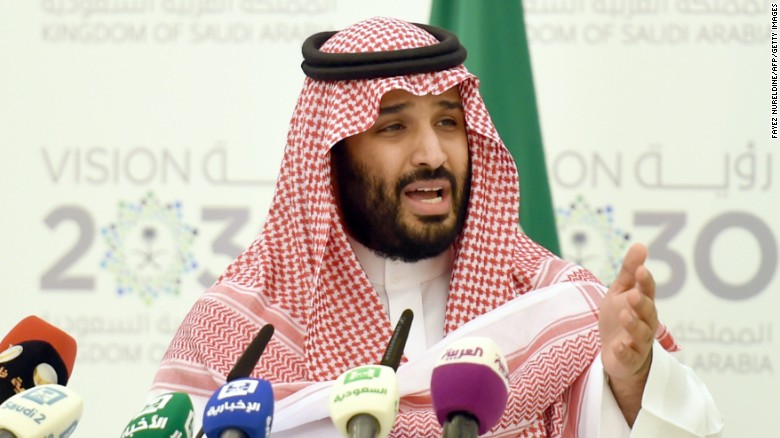 Deputy Crown Prince Mohammed bin Salman has risen to among Saudi Arabia's most influential figures since being named second-in-line to the throne in 2015.
Salisbury, of Chatham House, tells CNN: "We tend to see Saudi Arabia as incredibly conservative and incredibly static, but as long as there has been a Saudi Arabia it's quite a dynamic society."
He adds that the workings of Saudi society that have long been kept behind closed doors are finally leaking out into the public sphere, thanks to platforms such as YouTube and Twitter.
"That's confusing for us because in an external perspective it seems like a country lost in time, but when in fact you chip away below the surface — and we're talking about an urban elite level — there is change happening.
"And change has been happening for a long time."