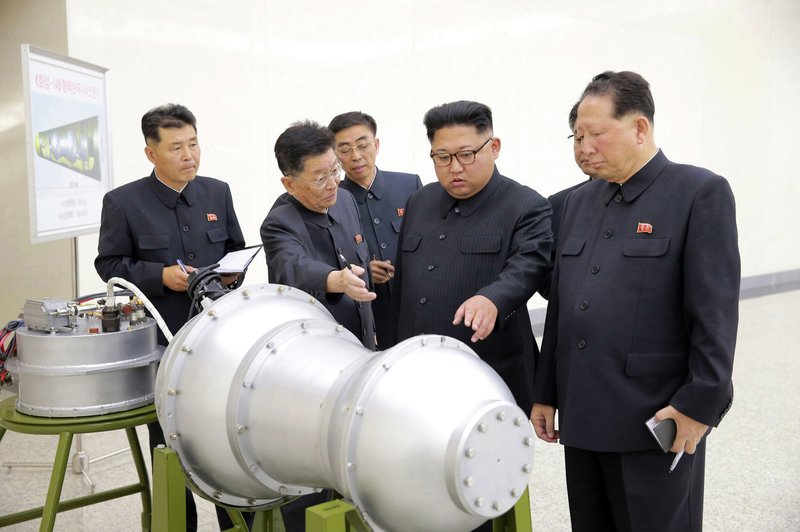 Success, even a small one, on the nuclear front could mean a prolonged detente and smooth the path for a planned summit between Kim and President Donald Trump in May or June. Optimists hope that the two summits might even result in a grand nuclear bargain.

North Korea’s announcement on Saturday to suspend further nuclear and intercontinental ballistic missile tests and close its nuclear test site raised hopes in Washington and Seoul for a breakthrough in the upcoming nuclear negotiations. However, the North’s statement stopped well-short of suggesting it has any intentions to give up its nukes or halt its production of missiles.

Failure to reach a nuclear agreement would raise serious questions about the sincerity of Kim’s recent outreach to Seoul and Washington and rekindle the fears of war that spread across the Korean Peninsula last year.

A look at the prospects of a North Korean disarmament deal ahead of the two impending summit talks:

Although North Korea has expressed a willingness to have “candid” talks with the United States about the denuclearization of the peninsula, there’s rampant skepticism about whether Kim will give up his nukes.

Those weapons are the core of his authoritarian rule, a “powerful treasured sword” meant to neutralize US nuclear threats. And the North’s call for “the denuclearization of the Korean Peninsula” has been linked to a demand for the withdrawal of the 28,500 US troops in South Korea.

Kim suggested during a trip to Beijing in March that he prefers step-by-step disarmament in return for corresponding concessions. That, critics say, could allow the North to covertly continue its weapons programs while winning badly needed aid, which occurred during now-dormant six-nation nuclear talks from 2003-2008.

Analysts say it’s likely that Kim will make similar commitments during the inter-Korean summit as a way of reaching out to the United States. Go Myong-Hyun of the Seoul-based Asan Institute for Policy Studies said Kim may also offer up a rough timetable for denuclearization.

North Korea argues that it needs its nukes because of the US military presence in South Korea and annual US-South Korean military exercises that the North claims are an invasion rehearsal.

During the two summits, Kim may demand a security guarantee for his government, the scrapping of what he calls US hostility and the easing or lifting of international sanctions on the North. The Kim-Trump meeting, not the Korean summit, will be the main venue for dealing with nukes because the United States must largely determine whether to accept the North’s demands.

Kim therefore has an interest in making his meeting with Moon a success, especially following reconciliation in recent months that saw athletes from both countries parade together during the Pyeongchang Winter Olympics opening ceremony and South Korean pop stars perform in Pyongyang.

It’s much less clear how the Kim-Trump meeting will go. Trump’s pick for secretary of state, Mike Pompeo, said recently that “no one is under any illusions that we will reach a comprehensive agreement.” Pompeo made a secret trip to meet with Kim and discuss the summit in recent weeks.

Trump seemed more optimistic after North Korea’s announcement on Saturday, to which he responded with a tweet saying, “This is very good news for North Korea and the World” and “big progress!” He added that he’s looking forward to his upcoming summit with Kim.

US officials have said they want complete, verifiable and irreversible disarmament by North Korea. Kim won’t likely accept that anytime soon because he’s closing in on his goal of developing nuclear missiles capable of striking the continental US after decades of struggle and sacrifice.

After his country’s most-powerful-to-date long-range missile test in November, Kim said the North had “finally realized the great historic cause of completing the state nuclear force.” Foreign experts, though, say the North still has a couple of technological barriers to overcome to build reliable intercontinental ballistic missiles.

WHAT KIND OF DEAL?

One disarmament step Kim might have in mind is to freeze or dismantle an ICBM program that poses a direct threat to the United States. Go said Kim could also offer to allow international nuclear inspectors back into his country and promise to dismantle the North’s old plutonium-producing reactor at its main nuclear complex because it has a uranium-enrichment plant that can also manufacture bombs.

North Korea could also submit a list of facilities or equipment to be disabled or dismantled and then allow the United States to inspect disarmament procedures. This process, however, could easily be disrupted if the North asks for excessive rewards for partial disarmament steps or the country fails to let outsiders inspect military bases or other sensitive places with possible nuclear weapons.

He said the two upcoming summits are a “huge gamble” for all three leaders if they don’t produce a breakthrough. If the summits fail, the world won’t tolerate any future Kim Jong Un charm offensive because of a belief that he tried to use the summits to weaken sanctions or buy time to perfect his nuclear program. Trump would be seen as being duped. And Moon would have to choose whether to risk undermining ties with Washington by continuing to improve ties with North Korea.