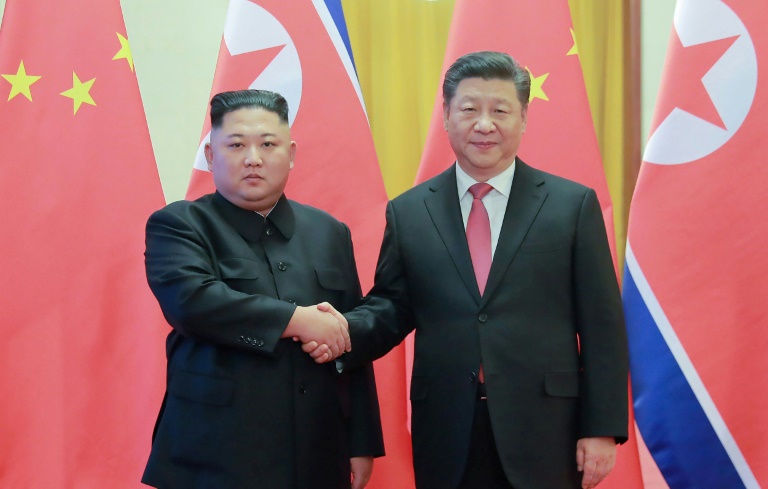 Xi Jinping will burnish China’s fragile alliance with North Korea by making his first trip to Pyongyang as president this week — and on Wednesday he sealed their friendship in ink, offering a “grand plan” for regional stability.

Xi, who will be the first Chinese president to visit Pyongyang in 14 years, penned a rare front-page opinion piece in North Korea’s official newspaper, touting their “irreplaceable” bond on the eve of this two-day trip.

Xi is visiting the country on Thursday and Friday at the invitation of North Korean leader Kim Jong Un as both men face their own protracted negotiations with US President Donald Trump.

With his visit, Xi can show that China still has some influence on its Cold War-era ally and play a role in efforts to convince Pyongyang to abandon its nuclear programme.

It could also give the Chinese leader some leverage when he meets Trump to discuss the US-China trade war at the G20 next week in Japan.

For Kim, having his powerful next-door neighbor visit will serve as a reminder to Trump that Xi will have his back if the nuclear talks fail for good.

In the op-ed piece in the Rodong Sinmun — the official mouthpiece of the North’s ruling Workers’ Party — Xi said Beijing was willing to draw up a “grand plan” with Pyongyang to achieve permanent stability in East Asia.

He also vowed that Beijing would play an active role in “strengthening communication and coordination with North Korea and other relevant parties” to push forward negotiations on the Korean Peninsula.

At subway stations in Pyongyang, commuters crowded around newsstands to read Xi’s article.

It appeared on page one of the Rodong Sinmun, in the bottom right hand corner. The whole of the top half of the front page was devoted to an editorial calling on citizens to uphold the works of Kim’s father and predecessor Kim Jong Il in building up the Workers’ Party.

“This op-ed is an extremely unusual event,” said Ahn Chan-il, a North Korean defector and researcher in Seoul.

“For Kim, he needed a public endorsement from Xi, so that he could tell his people that ‘look, someone as powerful as Xi has our back’,” Ahn told AFP.

‘In the same boat’

The trip by the leader of the North’s key diplomatic ally and main provider of trade and aid has long been awaited, and comes after Kim traveled to China four times for meetings with Xi.

China and North Korea have worked to improve relations in the past year from a low point as Beijing backed a series of UN sanctions against its Cold War-era ally over its nuclear activities.

Russia and China on Tuesday blocked an American initiative that aimed to halt fuel deliveries to North Korea, which Washington accuses of exceeding its annual limit for 2019, diplomatic sources said.

Hu Jintao was the last Chinese president to visit Pyongyang in 2005, when he met Kim’s father, Kim Jong Il.

Xi, who will be given the honor of a state visit, will pay homage at the capital’s Friendship Tower.

In recent days soldiers and workers have been sprucing up the tower, a monument to the Chinese troops who saved the North from defeat during the Korean War.

But few other signs of preparations were spotted Wednesday morning by AFP journalists in the capital, such as Chinese flags being installed in welcome.

In the op-ed, Xi stressed that this year marks the 70th anniversary of Beijing-Pyongyang relations.

“Over the past 70 years we have been unyieldingly advancing forward in the same boat, breaking through rain and wind,” Xi wrote.

“One can say this friendship is irreplaceable, even with an enormous fortune”.

Image: KCNA VIA KNS/AFP/File / KCNA VIA KNS Kim Jong Un has travelled to China four times, but Xi Jinping’s trip to North Korea will be the first by a Chinese president in 14 years

China's Xi in Russia to usher 'new era' of cooperation

US warns China on behavior towards its Asian neighbours