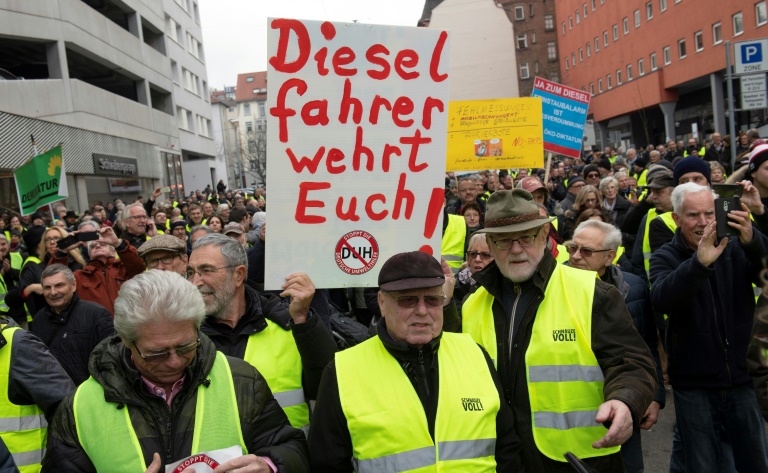 Hundreds of people demonstrated Saturday in Stuttgart, the bastion of Germany’s car industry, against a recent driving ban on older diesels, wearing yellow vests to match protesters in France whose movement began as a reaction to proposed fuel hikes.

The demonstrators held banners saying “Pro-diesel” and “Diesel drivers mobilize” as they gathered outside a car emissions center.

“Tens of thousands of people are affected and can’t afford to buy a new car” following the court-ordered ban, he added.

Judges ordered Berlin, Mainz, Hamburg and Bonn to limit some diesels’ access, while parts of a motorway near Essen will be closed to the cars.

In response, the Stuttgart organizers have asked people to hit the streets clad in the yellow high-visibility vests that have defined months of protests in France — themselves triggered by an increase in tax on diesel.

“Yellow vests give us visibility, also in the media,” Topalis said.

“The French are an example to us, because they dared take to the streets to protect their rights.”

Topalis was careful to delineate the movement from any existing political force, after far-right Alternative for Germany (AfD) attempted to capitalize on last week’s demonstration that drew 1,200 people.

Increasing numbers have been drawn to the movement over its four weeks, as Germany’s coalition government remains divided on how to balance the interests of drivers, city dwellers and the environment.