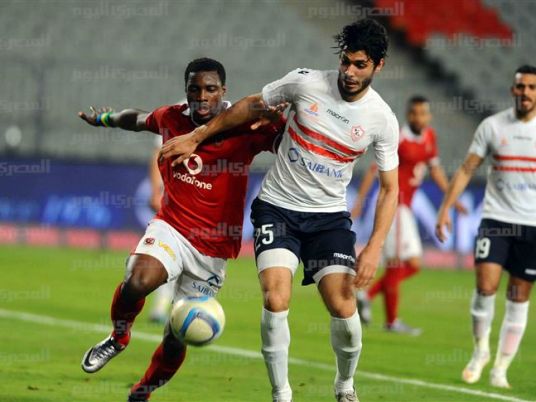 Zamalek Sports Club chief Mortada Mansour sacked the club’s football team coach and assistant, Ahmed "Mido" Hossam and Hazem Imam, following an unfavorable 2-0 defeat to arch rival Al-Ahly Club, on Tuesday.
Zamalek were pinning hope on the match to restore the league’s lead from Al-Ahly, but ended with staying second with 31, seven points behind Ahly.
Mido was appointed as team coach in early January, his second stint after an unfinished term with the team in 2014.
Veteran coach Mohamed Salah will temporarily lead the squad until a “foreign” replacement is contracted, Mansour said in press statements following the game, urging fans to continue “support” for the team and promising to keep the league’s title for a second year in a row.
“Mido and Hazem had done their best, I am sad for the team’s performance…don’t know what the loss was for,” said Mansour, before announcing that he was going to halt players payment until the end of the season as a punishment.
Edited translation from Al-Masry Al-Youm