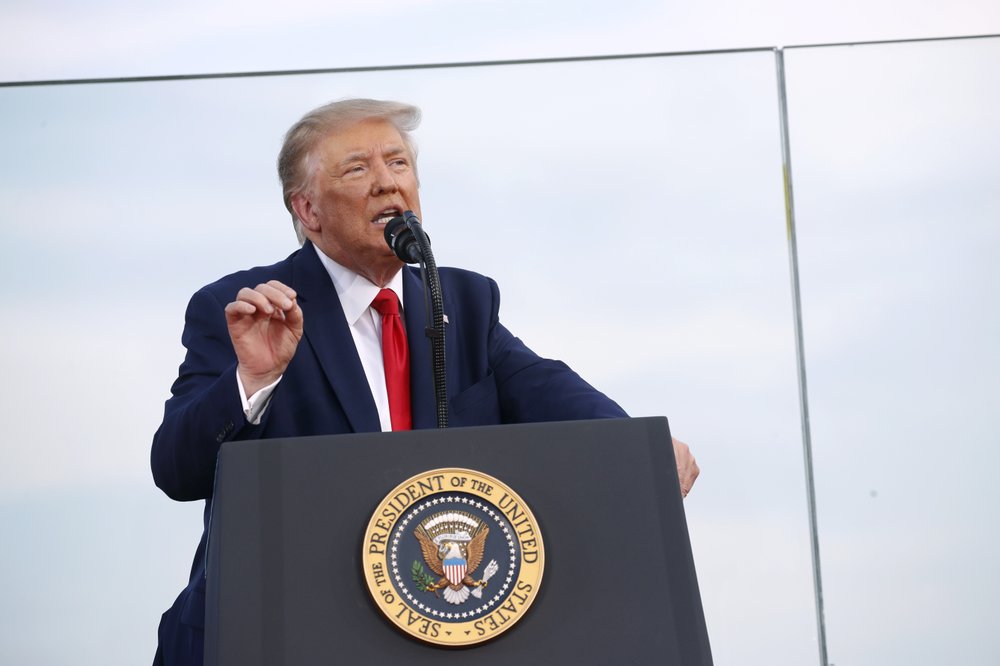 Presidential politics move fast. What we’re watching heading into a new week on the 2020 campaign:

Days to next set of primaries (New Jersey and Delaware): One

We’re moving into the heart of summer, but if you’re expecting the traditional summertime slowdown in presidential politics, don’t. The coronavirus pandemic is raging, family vacations are on hold, cable news viewership is booming and President Donald Trump is inflaming the nation’s culture wars to keep his base engaged.

Much of the political world, including people we speak to close to the Trump campaign, believes that the Republican president is facing the prospect of a blowout loss in four months unless the political landscape shifts dramatically. Recent history suggests there is time for a turnaround, although Trump is taking no steps to expand his coalition.

He briefly celebrated stronger-than-expected jobs numbers late last week, but he ignored the economy in a series of Independence Day appearances focused instead on what he described as “angry mobs” of radical leftists trying to destroy cultural monuments.

Meanwhile, Joe Biden handled his first news conference in almost three months last week without any major stumbles. The gaffe-prone former vice president will continue to face difficult questions, but until Trump manages to get the pandemic under control, it may be hard to hear them.

Has Trump surrendered to the coronavirus?

Biden last week accused Trump of surrendering to the pandemic, and given the president’s apparent lack of attention to COVID-19 as infections skyrocket, it’s worth asking whether the Democrats’ presumptive nominee is right.

Millions of voters saw images of Trump addressing thousands of unmasked supporters at Mount Rushmore on Friday, ignoring the guidance of his own administration’s medical experts — and his daughter. In case you missed it, Ivanka Trump urged Americans to practice “social distancing and wear a mask when in close proximity to others” just before her father faced a large South Dakota crowd that was doing the opposite.

The US reported at least 50,000 new infections for three consecutive days to open July, staggering numbers fueled by a surge of cases focused largely in Sun Belt states that backed Trump four years ago. More people in America have died from the disease, and more have been infected, than in any other country in the world, according to figures compiled by Johns Hopkins University.

Trump has offered no comprehensive national strategy to contain the pandemic. Despite evidence to the contrary, he’s blaming the surge on increased testing, and last week he suggested the coronavirus would “sort of just disappear.”

The nation is facing a public health crisis, economic devastation and a national awakening on racial disparity. What did Trump focus on over Independence Day weekend? “Angry mobs are trying to tear down statues of our founders, deface our most sacred memorials and unleash a wave of violent crime in our cities,” he warned.

The dark and divisive language is a fresh example of the kind of race-baiting that has defined Trump’s rise in politics, but political operatives in both parties tell us that it’s unlikely to help the first-term president improve his weak standing with key constituencies — women, minorities and college-educated voters, among them.

Still, absent any other consistent reelection message, Trump is leaning hard into white grievance politics to help energize his base of white, working-class men. He’s doing so even as a broader shift takes place in American culture away from symbols of white supremacy. Mississippi Gov. Tate Reeves, a Republican, signed a bill last week to remove the Confederate symbol from the state flag, while Republicans and Democrats on Capitol Hill support changing the names of military bases named for Confederate military leaders.

Trump’s instinct to stoke culture wars fueled his victory against Hillary Clinton in 2016. He’s betting everything that he can win the same way against Biden in 2020.

Will the job growth continue?

The economy took a big step forward last week after we learned the U.S. added 4.8 million jobs over the previous month. That was significantly better than most analysts expected, and it smashed the previous one-month record as the nation begins to restore some of the 30 million or so jobs it lost because of the pandemic.

Economists tell us it’s far too soon to celebrate, however, given the explosion of new coronavirus cases across the country and the number of businesses that have permanently closed.

Trump badly needs significant job growth to continue if he hopes to convince voters the nation is moving in the right direction by Election Day, even if it’s not back to normal. He’s got a lot of work to do. Several Republican officials have rolled back reopening plans in recent days because of the explosion of infections. And a Monmouth University poll found last week that only 18 percent of registered voters believe the country is moving in the right direction. For context, Republican pollsters we spoke to were worried about Trump’s reelection when the right-track number was in the 30s.

Kanye West has been teasing a run for a while now, but the enigmatic rapper formally declared over the weekend that he was joining the 2020 presidential race.

There are more questions than answers about West’s plans at this point. (His agent didn’t respond to our email requesting more information.) West has already missed the deadline to qualify for the ballot in several states, and it’s unclear if he has the ability or willingness to collect the signatures required to qualify in others. But to be a significant factor in 2020, he doesn’t necessarily need to appear on the ballot.

Democratic leaders may try to laugh him off, but the celebrity candidate could emerge as a real threat to Biden if he attracts even a small portion of the African American vote through a write-in campaign this fall. Remember, Trump won Michigan, Pennsylvania and Wisconsin by a combined 107,000 votes four years ago in no small measure because Hillary Clinton failed to energize voters in those states’ minority strongholds.

Biden’s allies were already worried about his standing with younger Black men. Even a half-hearted campaign from West could make his job harder.

In doing so, the Republican president sent the political world a resounding message: Even on a national day of unity, he cannot or will not change his instinct to embrace culture wars and race baiting. Not surprising perhaps, but light years away from what the GOP recommended just seven years ago when it commissioned a report highlighting “the importance of a welcoming, inclusive message in particular when discussing issues that relate directly to a minority group.”

2020 Watch runs every Monday and provides a look at the week ahead in the 2020 election.

Image: President Donald Trump speaks during a “Salute to America” event on the South Lawn of the White House, Saturday, July 4, 2020, in Washington. (AP Photo/Patrick Semansky)

Wide shift in opinion on police, race rare in US polling