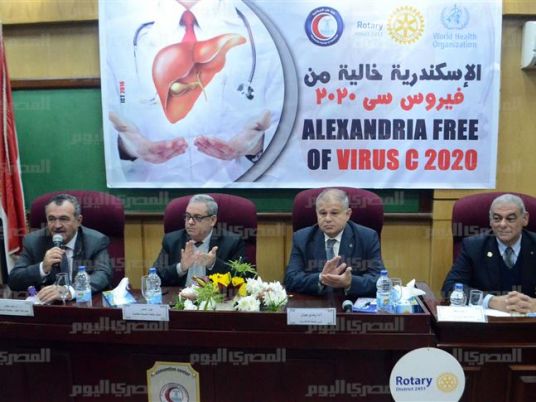 Professors from Alexandria University have indicated that there has been an increase in the rate of infection in people with hepatitis C and have stressed the necessity of making efforts to reduce the rate.
Ibrahim Mukhles, the Faculty of Medicine dean, said Egypt has one of the highest rates of hepatitis C in the world, with a rate that nears 10 percent, according to official estimates.
During a conference entitled “Alexandria free of virus C by 2020” on Saturday, Mukhles said the official estimates in 2013 showed that infected patients reached 8.8 million, in addition to an annual increase of 168,000 cases. The recovery rate in 2013 was only 1 percent, which means we are in need of 100 years to get rid of viruses B and C, he said.
The rate of infection in some governorates has reached 18 percent, compared to 6 percent in Alexandria, Mukhles added explaining that the rate is lower in Alexandria because the governorate is shaped like a strip that is geographically distributed into three sectors which are urban, rural areas and slums, contrary to more sprawling provinces.
Edited translation from Al-Masry Al-Youm