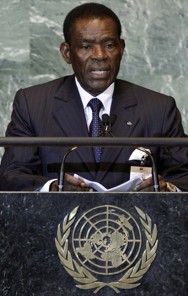 Human rights groups are urging UNESCO to abandon a prize named after Africa’s longest-ruling dictator, one they say could be tainted by some of the millions he allegedly has looted from oil-rich but poverty-stricken Equatorial Guinea.

The board of the UN agency for education, science and culture meets Monday and is expected to discuss the US$3 million UNESCO-Obiang Nguema Mbasogo International Prize for Research in the Life Sciences, which it accepted in 2008.

A chorus of outrage from around the world so far has delayed a decision on the prize that activists say should be quashed definitively.

Many ask how President Teodoro Obiang Nguema can offer such a prize while thousands of his people live without electricity or a clean water supply.

Railing against Obiang’s effort “to abuse the reputation and standing” of UNESCO, the New York-based Open Society Justice Initiative accused him of using the prize “to launder the image of his regime.”

Obiang has the support of African countries that form the biggest bloc in the agency’s 58-member executive board, with 14 seats compared to nine held by Western nations.

At last year’s board meeting, Obiang supporters seized the issue as imperiling the honor of Africa and turned the debate into one pitting developed countries against the G-77, according to a US Embassy cable published by WikiLeaks.

It quoted UNESCO Director-General Irina Bokova of Bulgaria as telling the US ambassador to France that she had maneuvered a delay by arguing that UNESCO had not received enough applicants for the prize to award a winner.

She said there were only 14 applications — with only five from Africa, and contrasted that to most UNESCO prizes receiving more than 60 applicants for purses much smaller than the $300,000 offered by the Obiang prize.

The cable quoted Bokova as warning: “I cannot ignore a board decision forever. I have given time for you to act.”

Ranged on the side of human rights activists are various governments and legislators, a coalition of human rights, press freedom, anti-corruption and public health organizations as well as several UNESCO prize winners and Nobel laureates.

South Africa’s retired Archbishop Desmond Tutu last year was among signatories to a letter saying they were “deeply troubled by the well-documented record of human rights abuse, repression of press freedom and official corruption that have marked his (Obiang’s) rule.”

Open Society Justice Initiative noted that Equatorial Guinea boasts Africa’s highest per capita gross national income of $17,608 a year, one of its smallest populations of about 700,000 and the most glaring disparity in the world.

“Yet under President Obiang’s rule, Equatorial Guinea has some of the lowest health and education levels in the world. Most of the population is mired in desperate poverty, with more than 60 percent living on less than $1 per day according to the UN Development Assistance Framework,” it said.

Equatorial Guinea was the worst governed country of all surveyed for UNDP’s 2011 Human Development Report, as measured by the disconnect between available wealth and development.

Instead, police seized tens of millions of dollars worth of antiques, art works and other luxury goods including a $2 million Louis XIV desk, Open Society said. The Avenue Foch mansion itself is reportedly worth more than $670 million, it said.

Obiang gave his heir-apparent the diplomatic post after French judicial officials in September seized 16 luxury “supercars,” including a Bugatti Veyron, as part of a money-laundering and corruption investigation.

A statement from Open Society said “the fact that he’s transparently using UNESCO to try to assert legal protection from a criminal investigation just reinforces the sense that the Obiang family has no regard for the organization’s mission — only how they can benefit from associating themselves with it.”

Obiang is trying to salvage the prize with an offer to rename it.

But Human Rights Watch said that does not address “the serious concerns” about the source of its funding.

For years, Obiang has been accused of siphoning off his country’s bountiful oil revenue. Hundreds of millions of dollars from Equatorial Guinea improperly banked in the United States helped bring down the once-venerable Riggs Bank of Washington D.C. in 2005.

In October, US authorities gave notice they intend to seize property in California bought with $70 million allegedly looted by Teodorin Obiang, who is also a Cabinet minister in his father’s government. The property includes a luxury Malibu mansion, an executive jet, sports cars and Michael Jackson’s crystal-covered glove from the “Bad” tour.