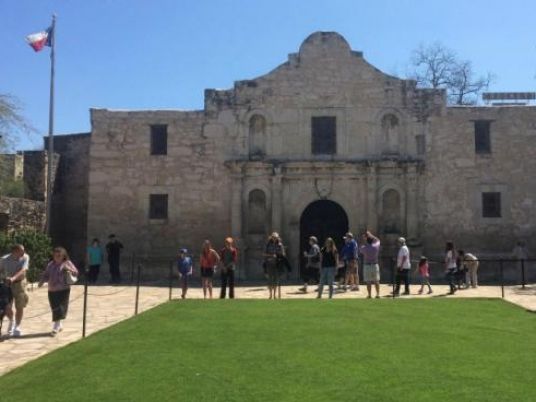 A U.N. agency named the Alamo and the four Spanish colonial Catholic missions in San Antonio as a World Heritage Site on Sunday, the first place in Texas deemed to be of "outstanding cultural or natural importance to the common heritage of humanity."
The decision caps a nine-year campaign by San Antonio and Texas to have the early 18th Century missions listed alongside world treasures such Britain's Stonehenge, the Taj Mahal in India, and Cambodia's Angkor Wat. The missions are the 23rd World Heritage Site in the United States.
"The City of San Antonio is delighted with UNESCO's decision today and the recognition that our Spanish colonial missions are of outstanding value to the people of the world," Mayor Ivy Taylor said from Bonn, Germany, where the announcement was made.
Sarah Gould, archivist at the Institute of Texan Cultures, said there are many reasons for the listing of the four missions, which are still used as Catholic churches, and the Alamo, a fortified church, barracks and other buildings that were the scene of the 1836 battle for Texas Independence.
"Other than the Alamo, which has had quite a bit of changes to it, the other four are in really wonderful condition," Gould said, "almost in as good a condition as they were when they were built."
As well as creating the basis for European settlement of what is now the U.S. Southwest, she said the missions were also important in the formation of its early economy, for instance by introducing cattle raising.
Casandra Matej, director of San Antonio's Convention and Visitors Bureau, said Sunday's listing will prompt a full scale, international tourism campaign.
She estimated it will mean more than 1,000 new jobs for the city's already robust tourism industry, and a $100 million annual boost for the region.
But the designation has not been entirely embraced in Texas, where the phrase "United Nations" provokes suspicion among some. The Texas Republican Party's official platform includes opposing "granting jurisdiction and sovereignty over Texas' cultural sites to any international body."
Matej said there was no way that would happen, and noted that the United Nations exercises no "sovereignty" over other U.S. World Heritage Sites, such as Philadelphia's Independence Hall, or Thomas Jefferson's Monticello home in Virginia.
"The current management, how everything is managed, will stay the same," she said. "This is a designation that will draw visitors to our destination, and allow us to share our splendid missions with the world."