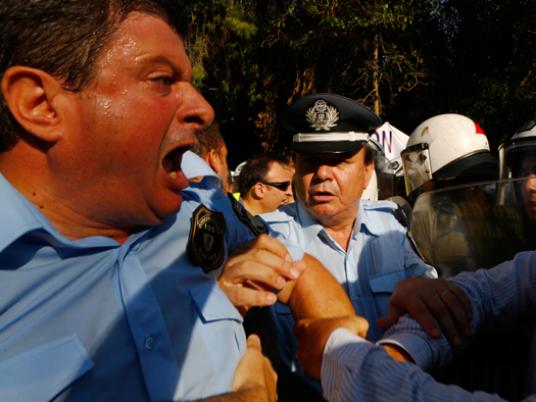 Police and protesters clashed in Spain, Italy and Portugal on Wednesday as millions of workers went on strike in organized labor's biggest Europe-wide challenge to austerity policies since the euro zone debt crisis erupted three years ago.

Hundreds of flights were cancelled, schools were shut, factories were at a standstill and trains barely ran in Spain and Portugal where unions held their first joint general strike. Stoppages in Belgium interrupted international rail services.

Workers also protested in Greece and France against austerity policies that have taken a heavy economic toll and aggravated mass unemployment.

But the demonstrations organized by the European Trade Union Confederation seemed unlikely to force hard-pressed governments to change their cost-cutting strategies.

In Spain, 118 people were arrested — including two allegedly with material to make explosives — after confrontations at picket lines and damage to storefronts. Riot police fired rubber bullets at protesters in central Madrid in one brief clash. Some 74 people were hurt.

"In austerity, there is only depression and unemployment," Fernando Toxo, head of Spain's biggest union, Comisiones Obreras told tens of thousands of demonstrators in central Madrid.

"This isn't about politics or unions. This is social and economic. If we have to shut down the country we'll shut it down," said 24-year-old Mariluz Gordillo, a non-unionized phone operator at El Corte Ingles department store in Madrid.

In Rome, scuffles broke out between police in riot gear and demonstrators who threw stones, bottles and fireworks at police. About 60 demonstrators were detained. Protesters occupied Pisa's medieval Leaning Tower for an hour, hanging a banner reading "Rise up. We are not paying for your crisis."

Police charged into hundreds of protesters outside parliament in Lisbon, with Portuguese television showing live footage of people being beaten. At least two people were seen being detained by police, who said they had charged in response to a barrage of stones from protesters.

In Portugal and Greece — both rescued with European funds and under strict austerity programs — the economic downturn sharpened in the third quarter, data showed on Wednesday.

Portuguese unemployment jumped to a record 15.8 percent while in neighboring Spain, one in four of the workforce is jobless.

Greece's economic output shrank 7.2 percent on an annual basis in the third quarter as the debt-laden country staggers towards its sixth year of depression.

Close to 26 million people are unemployed in the European Union while governments take aim at spending on treasured universal health care and public schools.

"Things have to change … Money has ended up with all the power and people none. How could this happen?" said Esteban Quesada, 58, a hardware store owner in Barcelona who closed his shop to join the protests in Spain's second city.

Throughout southern Europe governments are trying to put public finances back on track after years of overspending. Portugal and Greece have cut pensions and, with Spain, have slashed public sector wages as well as spending on hospitals and schools. Italy and France are also under pressure to control their budget deficits.

EU Economic and Monetary Affairs Commissioner Olli Rehn praised Spain on Wednesday for making progress in trimming its budget but acknowledged many Spaniards are struggling.

In Spain, most of the savings have been gobbled up by higher interest payments on the national debt, swollen by the cost of rescuing banks after a real estate bubble burst in 2008.

Germany's central bank, the Bundesbank, said in a report on Wednesday that the euro zone debt crisis is still the number one risk to German banks and insurers, and the situation had not improved from last year.

Promises from the European Central Bank to support sovereign bond prices for countries that seek aid have brought some relief to Spain and Italy in the capital markets. On Wednesday Italy sold three-year bonds at the lowest borrowing cost in two years.

Spain to stay the course

While several southern European countries have seen bursts of violence, a coordinated and effective regional protest against austerity has yet to force a significant policy shift.

Union leaders in Spain said more than 9 million workers had joined the general strike — the second this year.

The government said participation was much lower and played down the impact, saying many services were functioning normally. Stores opened normally in many parts of the country, though some had protesters outside.

About 5 million people, or 22 percent of the workforce, are union members in Spain. In Portugal about a quarter of the 5.5 million strong workforce is unionized.

Passions were inflamed when a Spanish woman jumped to her death last week as bailiffs tried to evict her from her home. Spaniards are furious at banks being rescued with public money while ordinary people suffer.

Passos Coelho's policies were held up this week as a model by German Chancellor Angela Merkel, who is despised in much of southern Europe for taking a hard line on the conditions attached to EU aid.

Inspectors from the "troika" of the International Monetary Fund, ECB and European Commission — who monitor implementation of the conditions — also drew the protesters' anger. In Lisbon, thousands filled a square in front of the Portuguese parliament shouting "This debt is not ours" and "Out IMF, out troika."

"I'm on strike because those who work are basically being blackmailed into sacrificing more and more in the name of debt reduction, which is a big lie," said Daniel Santos de Jesus, 43, who teaches architecture at the Lisbon Technical University.

Big demonstrations took place in Madrid, Lisbon, Barcelona and other cities through the evening on Wednesday.

More than 600 flights were cancelled in Spain alone, mainly by Iberia and budget carrier Vueling. Portugal's TAP cancelled about 45 percent of flights.

In France, five trade unions organized marches in more than 100 cities but did not call for a strike. Left-wing critics of Socialist President Francois Hollande said he has failed to address the concerns of French workers who have the same fears as their counterparts in southern Europe.