WASHINGTON (AP) — A more measured President Donald Trump does not necessarily mean a more truthful one.

In the final debate of the presidential campaign, he was loose with facts on the crisis of the time — the pandemic — and much else.

Trump did, though, exploit confusion sowed by Joe Biden during the primaries, when the Democrat occasionally made his position on energy sound more to the left than it actually is. Trump accurately called out Biden when Biden denied he had ever vowed to ban fracking. That was never Biden’s position, but it sometimes sounded that way.

THE FACTS: No, the coronavirus isn’t going away. It’s coming back. New cases are on the rise toward their summer peak. Deaths have also been increasing.

The United States has hit a daily record of coronavirus cases with more than 83,000 reported infections, thousands more than the previous US peak in July. The US death toll has grown to nearly 224,00, according to the tally published by Johns Hopkins University. The total US caseload reported Friday was 83,757, topping the 77,362 cases reported on July 16. 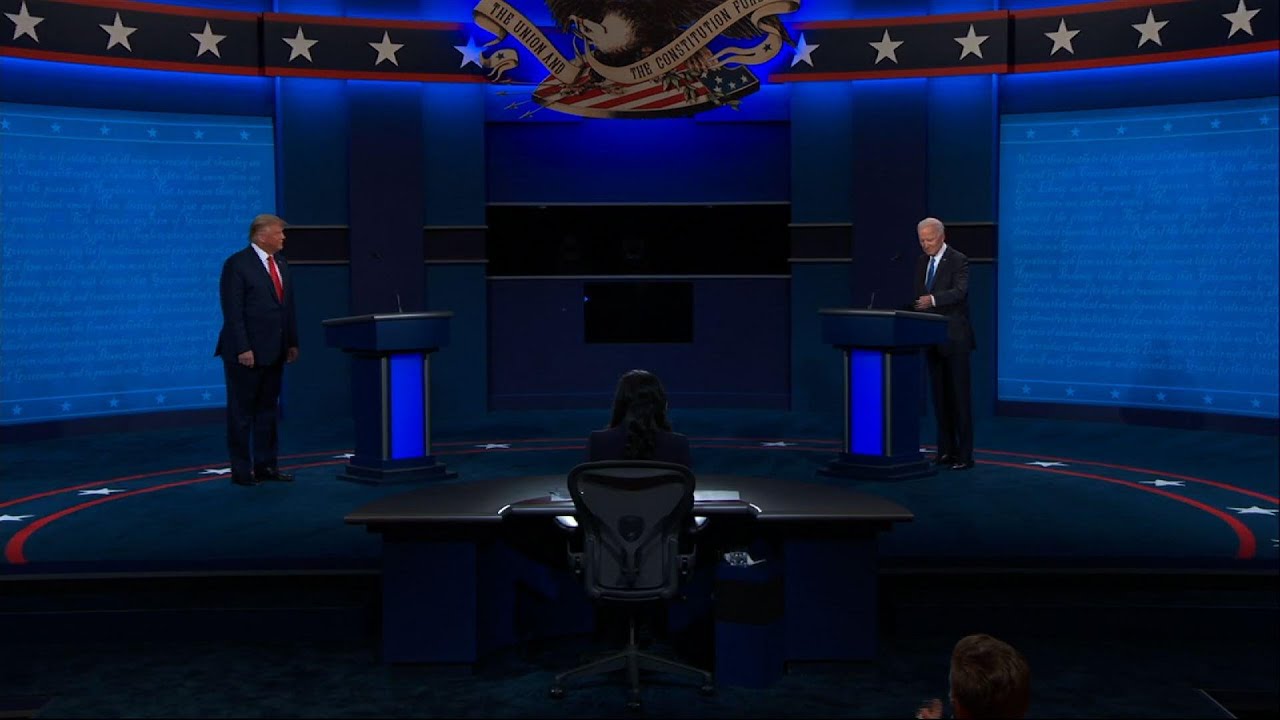 The seven-day rolling average of positive test rates has risen in 40 states over the past two weeks, from Oct. 8 to Oct. 22, according to the COVID Tracking Project. A few states seeing rising cases have very low levels of COVID-19, but in most states the increase comes on top of already concerning background levels of the coronavirus.

TRUMP: “All he does is talk about shutdowns. But forget about him. His Democrat governors — (Andrew) Cuomo in New York — you look at what’s going on in California, you look at Pennsylvania, North Carolina. Democrats — Democrats all. They’re shut down so tight, and they’re dying.”

THE FACTS: Neither of them is right. Coronavirus is a public health problem that affects people no matter where they live or what their politics are.

Some Republican-led states that were quick to reopen saw a surge of virus cases in the summer and are still struggling to get their transmission rates down. Florida’s test positivity rate is about 12% currently, a level indicating widespread transmission. South Dakota is approaching 35%.

Democratic-led states such as New York that were hit hard in the initial wave closed down and got their virus transmission rates down to very low levels. But they’re now seeing rebounds in certain communities, prompting them to target renewed restrictions.

Nevada and Pennsylvania are two states with Democratic governors and high transmission rates at 20% and 10% respectively by week’s end, based on a 14-day trend.

TRUMP on the toll of COVID-19 in the US: “So as you know 2.2 million people, modeled out, were expected to die.”

THE FACTS: This was his first line in the debate, and it is false. The US death toll from the pandemic was not expected to be that high.

Such an extreme projection was merely a baseline if nothing at all were done to fight the pandemic. Doing nothing was never an option and public health authorities did not expect over 2 million deaths.

Trump often cites the number to put the reality of more than 220,000 deaths in a better light and to attempt to take credit for reducing projected mortality.

At an April 1 briefing, when Trump and his officials discussed an actual projection of 100,000 to 240,000 deaths, the president held out hope of keeping deaths under 100,000. “I think we’re doing better than that.” He has repeatedly moved the goal posts to make the massive mortality and infection numbers look better.

THE FACTS: Yes he did. But he misspoke on one occasion, prompting his campaign to correct him after, and left unclear just where he stood at least one other time.

In a March Democratic primary debate, Biden said that if he became president, there would be “no more — no new — fracking.” His campaign quickly clarified that Biden meant he would ban new gas and oil permits — including fracking — on federal lands only. The vast majority of oil and gas does not come from federal lands.

That is Biden’s consistent position, stated frequently and in writing. Longer term, Biden has spoken about helping the country move toward a midcentury future free of fossil fuels. That does not equate to a fracking ban during his presidency.

TRUMP, speaking about children who were separated from parents at the US-Mexico border: “They are so well taken care of. They’re in facilities that are so clean.”

THE FACTS: Not so.

At the height of the family separations in 2018, Border Patrol facilities were cramped well beyond capacity with migrants who were kept in squalid conditions, according to watchdog reports and the lawyers responsible for a federal settlement that governs how children are cared for in immigration custody. Long-term facilities for adults and children were at capacity, meaning the administration held people in the small border stations for much longer than the 72 hours normally allowed by law.

The stations are hardly meant for long-term care. Children were not provided hot meals and families slept on the floor on top of Mylar blankets. Flu and sickness ran rampant, and hundreds of small children were kept together without adequate care.

TRUMP, on immigrants who are released from custody in the US to wait out their cases being allowed to stay: “They say they come back, less than 1% of the people come back. We have to send … Border Patrol out to find them.”

THE FACTS: That’s false. There are far fewer no-shows for immigration hearings among those who are released pending their cases. According to Justice Department statistics, a majority come back for their hearings.

THE FACTS: He’s wrong about the Affordable Care Act, also known as “Obamacare.”

President Barack Obama promised if you liked your health insurance, you could keep it under his health plan, but that’s not what happened for some.

When the law took effect in 2014, several million people lost individual health insurance plans that no longer met minimum standards established by the law. A backlash forced the White House to offer a work-around, but the political damage was done.

Health insurance is such a complicated area that almost any action has the potential for unintended consequences.

TRUMP: The Paris accord meant “we were going to have to spend trillions of dollars …. They did a great disservice. They were going to take away our business.”

THE FACTS: The Paris accord, an international agreement that aims to halt the rise in global temperatures, is based on voluntary emission reductions. No nation was forced to do anything.

TRUMP on his taxes: “They keep talking about $750, which I think is a filing fee. … Tens of millions of dollars (in income taxes) I prepaid.” On his China bank account: “I was a businessman in 2013 and I closed the account in 2015.”

THE FACTS: Trump is not being honest about his taxes.

Reporting by The New York Times, which obtained his tax records, contradicts his claims.

It’s not clear what Trump is talking about with regard to prepaying his taxes, but what matters is what he ultimately owed the government. Americans often have their income tax payments deducted from their paychecks. The Times reported that Trump, starting in 2010, claimed and received an income tax refund that totaled $72.9 million, which was at the core of an ongoing audit by the IRS. The Times said a ruling against Trump could cost him $100 million or more.

Nor did Trump close his Chinese bank account, according to Alan Garten, a lawyer for Trump’s company. He told the newspaper that the account remains open, though the company’s office in China has been inactive since 2015.

TRUMP: “Joe got $3.5 (million) from Russia. And it came through Putin because he was very friendly with the former mayor of Moscow, and it was the the mayor of Moscow’s wife. … Your family got $3.5 million. Someday you’re going to have to explain why.”

THE FACTS: There is no evidence of this. Trump is falsely characterizing a recent report by Sen. Ron Johnson, R-Wis., who investigated Biden’s son, Hunter, and his business dealings in Ukraine.

The report did not allege that Joe Biden himself got $3.5 million or that Russia President Vladimir Putin had anything to do with such a payment. Nor does the report allege that Hunter Biden pocketed the money himself. The report said the sum went instead to an investment firm he co-founded. Hunter Biden’s lawyer has said in a statement to reporters that his client had no interest in and was not a founder of the firm.

TRUMP to Biden: “I know more about wind than you do. It’s extremely expensive.”

THE FACTS: No it isn’t. His point is outdated.

Wind-energy costs hit all-time lows as of 2019, averaging less than 2 cents per kilowatt-hour for newly built projects, making it increasingly competitive with other generation sources, according to a report by the Energy Department’s Lawrence Berkeley National Lab. “Land-based utility-scale wind is one of the lowest-priced energy sources available today,” the department says.

Wind and solar have become much cheaper as their industries grow and technology improves.

It’s why solar and wind are expanding, along with cheap natural gas, while coal plants and nuclear plants are closing. This, despite regulatory rollbacks by the Trump administration to benefit the oil, gas and coal industries and undo Obama-era efforts against climate change and air pollution.

TRUMP: “It’s very intermittent. It’s got a lot of problems.”

THE FACTS: He’s exaggerating the downsides.

Trump’s opinion about wind power being unreliable isn’t shared by many big energy users. By next year, renewables such as wind and solar will be providing more of Americans’ electricity than nuclear- and coal-fired power plants do, says the government’s Energy Information Administration.

And it says that by 2045, renewables will surpass even natural gas in powering US electricity plants.

TRUMP: “The fumes coming up to make these massive windmills is more than anything that we’re talking about with natural gas.”

Wind turbines produce pollution when they are manufactured and little to none when in operation, federal scientists say. Even taking manufacturing emissions into account, wind power is far cleaner than natural gas.

THE FACTS: That’s obviously not true. But turbines do kill many.

Studies find that wind turbines kill an average of 230,000 birds a year in North America, says the US Fish and Wildlife Service. The number will grow as more turbines are deployed.

Glass windows in buildings kill an estimated 599 million per year and vehicles, about 214 million a year, the agency says. Altogether, the agency estimates that wind turbines are responsible for 1 in 14,000 bird deaths. So turbines are an additional threat to birds, if a comparatively small one.

EDITOR’S NOTE — A look at the veracity of claims by political figures.