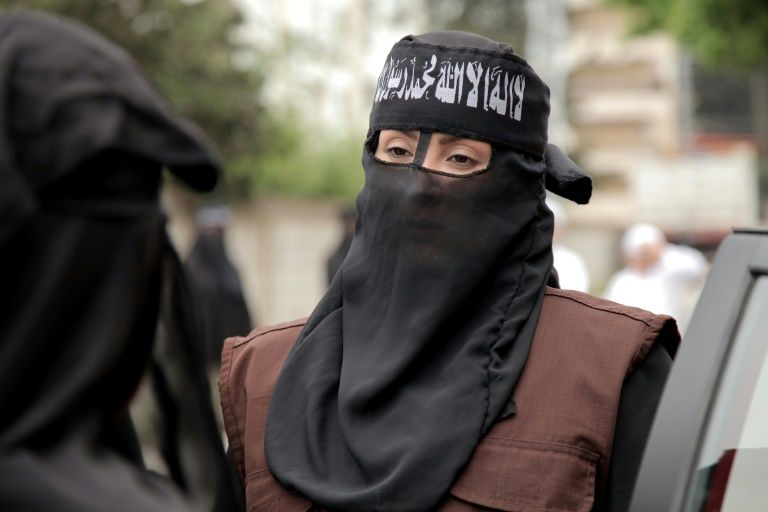 Actors on the set of “Black Crows” at the Middle East Broadcasting Center studios in Lebanon. Inspired by true stories, the series will air during Ramadan and is the first television depiction of life under Islamic State group rule in Syria and Iraq

They are mothers, daughters, wives — and suicide bombers: an Arab television drama timed for the Muslim holy month of Ramadan tells the untold stories of women and the Islamic State group.

Inspired by true events, “Black Crows” airs over Ramadan — prime time for television viewers in the Arab world — which starts this weekend, and it is the first television series depicting life under IS rule in Syria and Iraq.

Produced by Saudi Arabia’s MBC Group, the series focuses on the stories of the women who volunteer with or are forced to join the jihadist group and “the fear that shapes” their relationships.

“We wanted to tell real stories that would both touch people and reflect the ugly reality of terrorism,” MBC spokesman Mazen Hayek told AFP at the network’s Dubai headquarters.

“We realised that the Arab media could no longer sit and watch while terrorist groups used media as a central part of their war.”

One episode features a girl and her grandmother, both in the niqab Muslim veil, selling dinner plates decorated with pictures of animals in an IS-controlled village in order to survive.

A group of armed women from the Hesba, the extremists’ female police unit, order them to pack their goods on the grounds that the animal designs were “haram”, or forbidden in Islam.

But the grandmother refuses to yield to Hesba’s authority, saying she would rather break her plates than give in.

She is shot in the head by a member of the Hesba.

Another episode shows a training camp for children with machine-guns and “human targets” — prisoners taken by IS.

“Bullets are faster than people,” a gunman reminds a child aiming at prisoners scrambling to take cover. “Get two more of them and you can go see your mum.”

With a cast including actors from Saudi Arabia, Syria and Iraq, the $10-million production was filmed mainly in Lebanon and took over a year to research and another six months to shoot.

“Shocking scenes” in the series could “either attract or repel the viewer, but he could not remain indifferent,” said Fadi Ismail, head of the production company.

“It is strong drama and the viewer can always control what to watch,” he said.

Lebanon, the main location, hosts more than one million Syrian refugees and has been the scene of deadly suicide bombings claimed by IS.

“Security was our most difficult challenge” during shooting, said executive producer Amer Sabbah.

“When you transform an area in Lebanon into what resembles an IS headquarters, you have to consider security and safety of your crew,” he said.

In 2015, an MBC-produced Ramadan special, a satire named “Selfie”, took aim at IS with a storyline in which the Saudi main character heads to Syria to bring back his son who had joined the group.

The actor, Nasser al-Qasbi, received a string of online death threats after the episode aired.

The ugly truth behind Saudi Arabia's love for Melania Trump