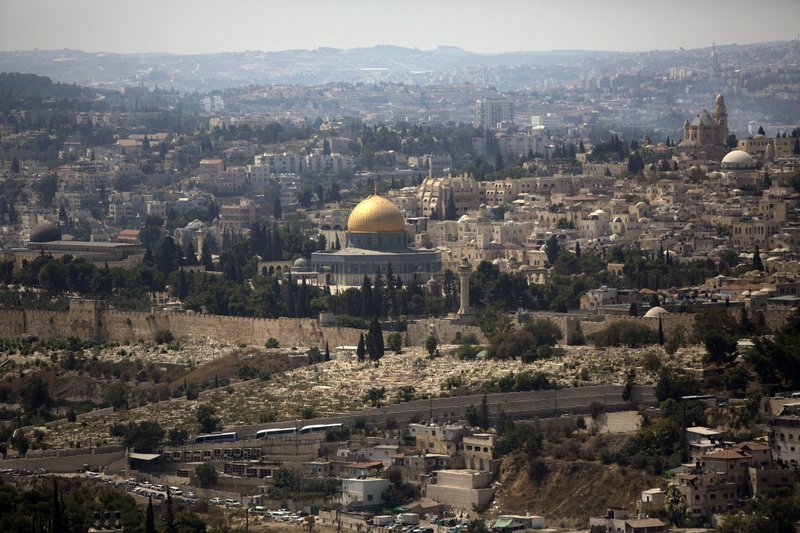 JERUSALEM (AP) — An Israeli plan to build a cable car to Jerusalem’s historic Old City has united architects and Palestinian activists in opposition to a project they say is both an eyesore and a ploy to entrench Israeli control over the city’s contested eastern sector.

Developers say the proposed project is meant to relieve snarling traffic and will ferry some 3,000 tourists an hour from the western sector directly to the Old City, in east Jerusalem. It follows a series of Israeli projects in the combustible city that have enraged the Palestinians.

Further complicating matters is the project’s association with the Elad Foundation, a group that has settled Jewish nationalists in the heart of Jerusalem’s Arab neighborhoods. The final cable car station will be integrated into a future tourist center run by the organization.

“The cable car will send oblivious tourists flying over the heads of Palestinians and drop them off in the middle of occupied east Jerusalem, the eye of the storm, the …. center of the Israeli-Palestinian conflict,” said Betty Herschman of Ir Amim, an advocacy group that promotes equality in the city. “This cable car is putting new facts on the ground that undermine any possibility for a peace process.”

Israel captured east Jerusalem, along with the limestone-walled Old City, in the 1967 Mideast war and later annexed it, a move never recognized internationally. The Palestinians claim the eastern sector as capital of a future state while Israel considers the entire city its eternal, undivided capital. The conflicting claims to east Jerusalem lie at the heart of the Israeli-Palestinian conflict and have frequently spilled over into violence.

In recent years, Israel has carried out a series of initiatives, billed as development projects, that have infuriated the Palestinians. Israel built a light rail train through both parts of the city, abutting the Old City and snaking through predominantly Arab neighborhoods. The train is popular with Arabs and Jews, but it has also been the target of Palestinian rioters when tensions rise.

Another proposed plan involves digging a railway tunnel under Jerusalem’s Old City, passing near sites holy to Jews, Christians and Muslims. The proposed line would end at the Western Wall, with a station named after President Donald Trump, who is cheered in Israel for having recognized Jerusalem as its capital.

Beyond political opposition, the cable car has faced an outcry from urban planners and architects.

“This project is an outrage, an affront to our historic skyline,” said Moshe Safdie, a renowned architect who signed a petition against the plan along with 70 Israeli figures from architecture, archaeology and academia. “This will Disneyfy a sacred place. Imagine a huge cable car flying over the Vatican and dumping tourists in front of St. Peter’s. It’s unprecedented.”

No image says Jerusalem like the postcard view of its Old City — with its towering ancient walls, the Western Wall and the glimmering gold-topped Dome of the Rock.

The cable car would run 1,400 meters (nearly one mile), launching from the First Station, a popular food and cultural center in west Jerusalem, sailing over the city’s ancient valley, stopping at Mount Zion, a hill just outside the Old City walls, and proceeding through the Palestinian neighborhood of Silwan before alighting at the tourist center.

Aber Zayyad, a Palestinian resident of Silwan and director of its women’s community center, said she fears the cable car flying overhead will infringe on residents’ privacy and that its construction may harm houses and a local cemetery.

“Our tombs will likely be damaged, not to mention our lives,” she said. “And of course it will further attempts to make Jerusalem a solely Jewish city.”

The cable car’s destination at the tourist center has sparked concern about the project’s potential to serve settler interests by promoting Elad’s exclusive Jewish narrative of the city.

“We believe that this is an attempt to change the character of the city and its face … its culture and identity,” said Adnan Husseini, the Palestinian minister of Jerusalem Affairs.

Israel’s Tourism Ministry denies any political motivation. It says the cable car presents an environmentally friendly solution to the crisis of congestion, accessibility and parking at a time of record-breaking tourist visits. The Old City is Israel’s No. 1 tourist destination.

Israel’s National Infrastructure Committee, which fast-tracks transportation projects of national importance, has given approval to the project. A building permit is to come after a 60-day period of public review — a step that developers believe will be a formality.

In May, Israel allocated some $55 million to the project and, barring major complications, cars should be crisscrossing the valley by 2021, the Tourism Ministry said.

Amir Halevi, the ministry’s director general, said he sympathizes with concerns about the sensitivity of the site but claimed that the rapidly rising tourism rates demand a dramatic response.

“There is always the question of how to balance developing and preserving,” he said. “But you cannot stop development.”

Halevi added that the Ministry mapped the cable car route carefully to “minimize” the evacuation and demolition of buildings.

He stressed the cable car would not enter the Old City or go over its walls, but would stop just outside. “We’re doing this to prevent the need to construct more invasive things,” he said.

Urban planning experts disagree that the cable cars, which hold 10 people per carriage, will resolve the city’s daunting transportation problems.

Salmah Milson Arad, director of the Jerusalem chapter of the Association of Architects and Urban Planners, estimated the cable cars will relieve only around 30 percent of bus traffic.

Other critics have questioned whether the massive undertaking will even appeal to customers.

“Israelis come to the (Western) Wall in their cars, the ultra-Orthodox walk, Arabs won’t use this, and it’s hard to imagine tourists in massive buses going out of their way to get to First Station,” said Giora Solar, architect and former director of conservation for Israel’s Antiquities Authority. “So who’s going to benefit?”