Every day, Pawel Sawicki, head of social media at the Auschwitz Museum, posts several photos of victims of the former Nazi German death camp on a Twitter account that has become a powerful tool in Holocaust education.

A recent post to the account, which has a million followers, featured a photo of a baby girl in a knitted woollen dress, adorned with a large white collar.

“8 April 1940 | French Jewish girl Jacqueline Benguigui was born in #Paris. She arrived at #Auschwitz on 25 June 1943 in a transport of 1,018 Jews deported from Drancy. She was among 418 people murdered in a gas chamber after the selection,” reads the caption.

“We show people on their birthday and provide biographical information,” Sawicki told AFP.

“It’s important for us to show the fates of individuals because it is sometimes difficult to fathom the scale of the crime.”

This year marks 75 years since the liberation of Auschwitz-Birkenau, Nazi Germany’s most notorious twin death camp where over 1.1 million people, mostly European Jews, were killed.

Created by the Germans in the southern town of Oswiecim in 1940, in what was then occupied Poland, it has come to symbolise the murder of six million European Jews in the Holocaust.

Using social media, the museum hopes to teach a wider audience about the horrors of the genocide, especially as there are ever fewer survivors able to offer testimony.

“People are very touched by the photos of the victims, often they send us photos of their loved ones who died in the camp and ask us to publish them, which we do,” said Sawicki.

The museum has come to regard its wider presence on social media as being an important extension of its memorial and educational mission.

While the museum on the site of the former death camp attracts over two million visitors each year, thousands also visit its Twitter, Facebook and Instagram sites everyday.

The memorial became the first institution of its kind in the world to have a Facebook account in 2009.

The memorial reached one million followers on Twitter in January 2020 thanks in part to having actor Mark Hamill — best known for his role as Luke Skywalker in Star Wars — as a follower and supporter.

To reach as many people as possible, the memorial uses Facebook to livestream special events, including ceremonies marking the camp’s liberation and important visits, Sawicki said.

It publishes photos on its Instagram account, which also allows museum officials to see what visitors are posting, and in some cases, if the photos disrespect Auschwitz victims, take action.

“But it’s Twitter that now seems to be our most important communication tool,” said Sawicki.

On the 75th anniversary of the liberation of the camp, in January of this year, the museum had 270 million interactions on Twitter.

The digital platform also gives the museum the opportunity to fact-check and to call out historical fallacies and anti-Semitic content online.

In February, it tweeted out a request to US e-commerce billionaire Jeff Bezos, asking him to remove Nazi-era anti-Semitic children’s books featured on his Amazon global digital sales platform. Amazon complied.

Last year, Sawicki also got Amazon to ban the sale of Christmas decorations including images of the camp.

“We sometimes correct journalists who make mistakes from time to time,” said Sawicki, himself a former journalist.

For instance, he always reacts when someone uses the erroneous term “Polish camp” instead of “Nazi German camp” to describe Auschwitz, which the Germans created and operated without Poland’s collaboration after they occupied it in 1939.

“Before, we used to call the editorial team, we wrote emails, it sometimes took weeks to make a correction,” he said.

Thanks to Twitter, it now often takes as little as a few minutes for publications to make a correction.

Sawicki has also tweeted to politicians. They include the Russian Duma speaker Vyacheslav Volodin, who in January asked Polish officials to apologise for Nazi Germany’s concentration camps.

Sawicki offered him online courses on the history of the camp and the Holocaust prepared by specialists.

“We don’t want this memorial to be exploited in any way whatsoever in any current political debate,” said Sawicki.

Twitter also helped the museum address historical errors in “The Tattooist of Auschwitz”, a best-selling book by Heather Morris.

The author’s decision to invent a scene in which a bus is used as a gas chamber — something which never happened at Auschwitz — “creates a distorted version of Auschwitz,” the memorial said in a tweet.

“I read these everyday and say the people’s names in my head to validate their existence. Each one strikes a sadness in me. Tonight, my stomach sunk, my heart broke and I was in sincere pain,” user @swixon said in a tweet, adding: “Thank you for keeping these people alive.” 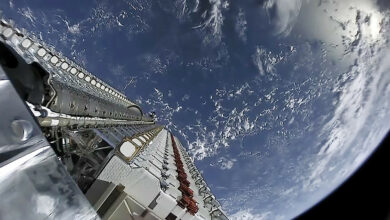