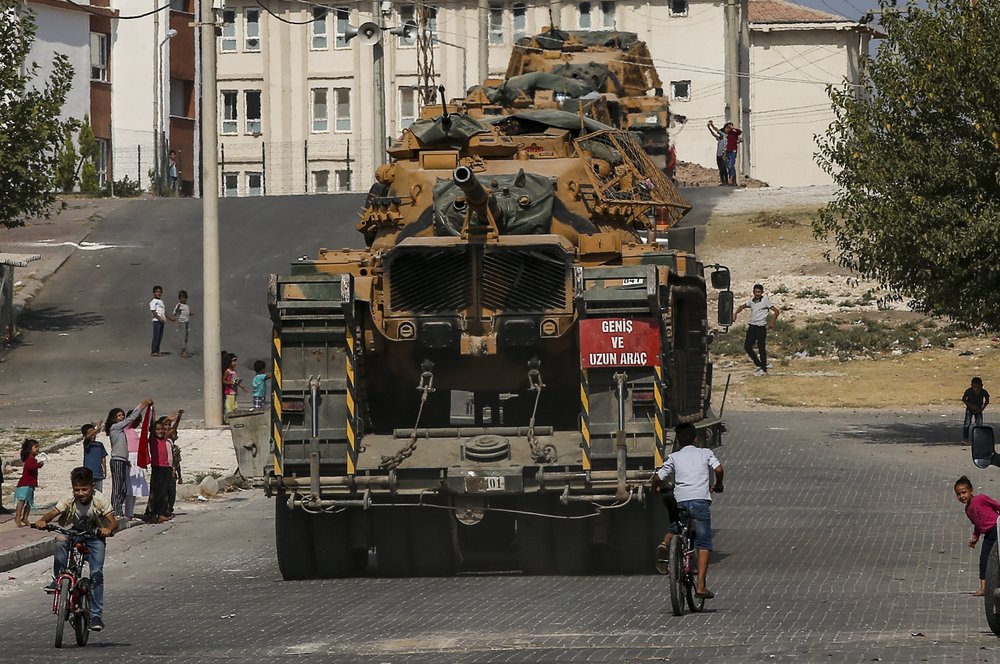 BEIRUT (AP) — The latest on Turkey’s invasion of northern Syria (all times local):

Australia has ruled out retrieving dozens of Australian women and children from refugee camps during the cease-fire in Syria.

Dutton says he is hopeful the cease-fire will lead to lasting peace.

About 46 Australian women and children who fled Islamic State-held territory are being held at the al-Hawl refugee camp in northern Syria.

Turkey’s president has responded to a tweet by Donald Trump in which the US leader says a Turkish-U.S. cease-fire deal will save millions of lives.

In his response, Recep Tayyip Erdogan tweeted Thursday: “Mr. President, many more lives will be saved when we defeat terrorism, which is humanity’s arch enemy.”

Erdogan’s reply came hours after the U.S. and Turkey agreed to a five-day cease-fire in northern Syria during which Kurdish fighters would withdraw to roughly 20 miles from the Turkish border. Turkey regards the Syrian Kurdish fighters as terrorists due to their links to outlawed Kurdish rebels fighting in Turkey.

The arrangement appeared to be a significant embrace of Turkey’s position in the weeklong conflict.

The United Nations says Secretary-General Antonio Guterres welcomes any effort to de-escalate the situation in northeastern Syria and protect civilians.

U.N. spokesman Stephane Dujarric said in a brief statement Thursday that “the secretary-general recognizes that there is still a long way to go for an effective solution to the crisis in Syria.”

Dujarric said Guterres is aware of the discussions between US Vice President Mike Pence and Turkish President Recep Tayyip Erdogan, which led to the announcement of a five-day cease-fire.

Turkey launched an offensive against Kurdish fighters who had been allied with U.S. forces in their campaign against the Islamic State extremist group. The incursion began after U.S. President Donald Trump announced the withdrawal of American forces from northern Syria.

The commander of Kurdish-led forces in Syria has told Kurdish TV that they will abide by a cease-fire agreement announced in Ankara by U.S. Vice President Mike Pence.

Mazloum Abdi tells Ronahi TV that the extent of the cease-fire stretches 100 kilometers (60 miles) from the town of Tal Abyad to Ras al-Ayn.

That appeared to conflict with Turkey’s insistence that its “safe zone” from which Kurdish forces must be removed should stretch the entire length of the border from the Euphrates River to Iraq.

“We will do whatever we can for the success of the cease-fire agreement,” Mazloum said Thursday, describing it as a “tentative agreement.”

U.S. and Turkey agreed to a five-day cease-fire in northern Syria during which Kurdish fighters would withdraw to roughly 20 miles away from the Turkish border.

The arrangement appeared to be a significant embrace of Turkey’s position in the weeklong conflict.

The president of the UN Security Council says a cease-fire on Turkey’s attacks on Kurdish fighters in northern Syria would be “a great thing if it happens.”

The US and Turkey agreed Thursday on a five-day cease-fire that US Vice President Mike Pence said was aimed at ending the bloodshed from Turkey’s military offensive, which followed the withdrawal of American troops.

Matjila said a cease-fire would give the parties “the chance to go back to the political track” and encourage the first meeting of the 150-member committee that will draft a new constitution for Syria on Oct. 30.

“If it does happen, I think it’s a step in the good direction,” Matjila said.

Russia’s foreign minister says Moscow will try to promote a deal that would help Turkey secure its border while ensuring Syria’s territorial integrity.

Sergey Lavrov said Russia will work to “settle the Kurdish problem through a dialogue between the Kurdish leaders and the legitimate government in Damascus.” He added that a future agreement must ensure “Syria’s territorial integrity and Turkey’s security interests.”

Russia has deployed its forces to Syria’s north as a buffer force in the face of a Turkish after the U.S. troops pullout.

Lavrov spoke to Interfax on Thursday before U.S. Vice President Mike Pence said after talks with Turkish President Recep Tayyip Erdogan that Turkey has agreed to a cease-fire in Syria to allow for a Kurdish withdrawal from a security zone 20 miles south of Turkey’s border.

Turkish Foreign Minister Mevlut Cavusoglu says the United States has accepted “the importance and functionality” of a “safe zone” long-pushed by Turkey and says Turkish Armed Forces will control such a zone under an agreement reached with the United States.

Cavusoglu on Thursday insisted that Turkey had agreed to a “pause” in fighting, rejecting the term cease-fire, which he said is only possible between “two legitimate sides.”

“We will only halt our operation after the terrorist elements depart,” northeast Syria, Cavusoglu added.

Cavusoglu added: “The pause does not mean that our soldiers and our forces will withdraw. We remain there and continue to be there.”

Turkey’s state-run news agency says a total of 71 Turkish-backed Syrian opposition fighters have been killed since the start of a Turkish-led incursion into northeast Syria.

Anadolu Agency said Thursday that another 207 fighters have been wounded in clashes since the offensive was launched on Oct. 9.

Seven fighters were killed on Thursday in “violent fighting” that occurred near the towns of Tal Abyad and Ras al Ayn, Anadolu reported. Twenty others were wounded, the report said.

Turkey says it aims to create a “safe zone” along its border that would be cleared of Syrian Kurdish fighters that it regards as terrorists.

Turkish officials say a total of six Turkish soldiers have died since the start of the incursion. At least 20 civilians were also killed.

French President Emmanuel Macron is urging his European Union partners to unite in condemning Turkey’s invasion of northern Syria and warns the incursion could revitalize the so-called Islamic State group.

Speaking in Brussels on Thursday ahead of an EU summit, Macron told reporters that “I want us to speak again with a united, clear and firm voice to condemn this attack.”

He is urging the 28-nation bloc to agree “all together to stop arms exports to the Turks.”

Syrian President Bashar Assad has blasted Turkey’s “criminal aggression” in Syria, vowing that Damascus will respond to the offensive.

Assad made his comments Thursday in Damascus while receiving Iraq’s National Security Adviser Faleh al-Fayyadh, who is on a visit to Syria.

There have been concerns that the Turkish attack against Kurdish fighters might lead to a revival of activities by the Islamic State group that once controlled large parts of Iraq and Syria.

Assad said the military operation is part of Turkish President Recep Tayyip Erdogan’s ambitions and is being carried under “false slogans.”

The Syrian leader vowed to respond to the Turkish attack “in any area in Syria and through all available legitimate means.”

The meeting Thursday came as U.S. Vice President Mike Pence and Secretary of State Mike Pompeo arrived in Turkey to press Turkey to halt its military offensive in Syria.

The two agreed on the need for continued Russian-Turkish cooperation to prevent the threat that “all terror organizations” pose to Syria’s territorial integrity, the agency reported.

Erdogan is scheduled to meet with Russia’s President Vladimir Putin in Sochi, Russia to discuss the military operation.

The Kremlin says Russia’s President Vladimir Putin will discuss humanitarian problems stemming from Turkey’s military operation into northern Syria when he meets with his Turkish counterpart next week.

Putin expressed his concern over the “possible humanitarian consequences of this operation” during a recent telephone call with Recep Tayyip Erdogan.

Kremlin spokesman Dmitry Peskov said Thursday that the toll of Turkey’s operation, now in its ninth day, “will be a very important theme on the agenda of the talks.” The two leaders are set to meet Tuesday.

Peskov also said he was surprised by the harsh tone used in by U.S. President Donald Trump in a recent letter to Erdogan, warning the Turkish leader not to be a “tough guy.”

The Russian spokesman said: “Such language is not often encountered in communication of state leaders. It’s a pretty unusual letter.”

Iraq’s foreign minister says his country will only take back Iraqi citizens detained in Syria who were fighters with the Islamic State group and their families.

Thursday’s comments by Mohammed Ali-Hakim said that the home countries of other former IS members and their families should take the necessary measures.

His remarks followed a meeting with his French Foreign Minister Jean-Yves Le Drian in Baghdad, and come amid worries about the fate of thousands of IS members held by Kurdish fighters in Syria.

Kurdish-led forces in Syria are warning that they might not be able to adequately guard some 10,000 IS fighters because of Turkey’s ongoing military operation into northern Syria, which began last week. That’s raised fears of potential IS jailbreaks.

Le Drian says his visit is to discuss the repercussions of the Turkish operation, warning that it “is threatening the gains that were achieved against IS.”

German Chancellor Angela Merkel has again called on Turkey to stop its military offensive in Syria.

Merkel said in a speech Thursday in parliament that the offensive “makes tens of thousands, among them thousands of children, flee.”

She says it strengthens the role of Russia and Iran in the region and says the consequences of that “cannot be judged today.”

Merkel says both the Middle East and Europe are being made to feel insecure because prisoners of the Islamic State extremist group are no longer being adequately guarded by Kurdish-led forces. Those forces are now diverting their attention to the Turkish invasion.

Syria’s Kurdish fighters have allied with the U.S. since 2014 to fight IS militants.

Merkel also reiterated that Germany will not deliver arms to Turkey.

The commander of the Syrian Kurdish-led forces says U.S. President Donald Trump did not oppose a deal his group made with Russia and the Syrian government to protect against a Turkish offensive in northeastern Syria.

Commander Mazloum Kobani told Ronahi, a Kurdish TV channel, late Wednesday that Trump essentially gave the go-ahead for the deal. Kobani and Trump spoke by telephone Monday, a day after the Kurdish forces announced the agreement.

The deal came after Trump ordered U.S. troops to step aside as Turkey launched its attack last week. Syria’s Kurdish fighters have allied with the U.S. since 2014 to fight Islamic State militants. Kobani said the priority now is to stop Turkey’s invasion.

Kobani said his forces will decide what to do with detained IS prisoners and their families.

Photo: Local residents cheer, as Turkish army tanks are transported on trucks in the outskirts of the town of Akcakale, in Sanliurfa province, southeastern Turkey, at he border of Syria, Thursday, Oct. 17, 2019. U.S. Vice President Mike Pence, heading a delegation that includes Secretary of State Mike Pompeo and White House national security adviser Robert O’Brien, arrived in Turkey on Thursday, a day after Trump dismissed the very crisis he sent his aides on an emergency mission to douse.(AP Photo/Emrah Gurel)