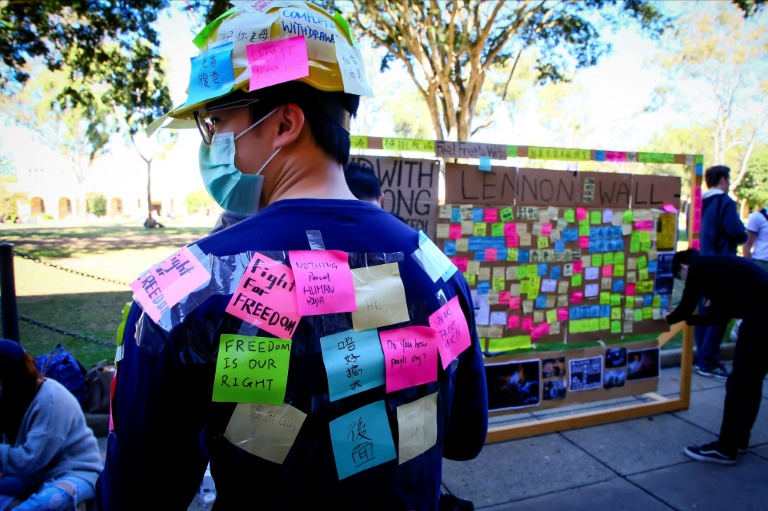 Tensions in Hong Kong have rippled across Australian universities, as supporters of the pro-democracy protests have been targeted and harassed by “patriotic” mainland students — with the tacit backing of Beijing.

Public rallies and other acts of solidarity have been staged at several campuses during the Asian financial hub’s two months of civil unrest, including the emergence of “Lennon walls” plastered with sticky notes extolling the virtues of free speech and democracy.

But that has angered some mainland Chinese students, who have physically confronted protestors, torn down message boards and demanded universities provide a “pure study environment” free of political messages that “insult” their homeland.

Video from a small pro-democracy rally at Monash University on Tuesday shows a man aggressively shouting at students and manhandling someone who tried to step in, while a companion films the confrontation.

“We wear masks because we know they will take photos and put it online on their social network sites and they try to find who (we) are,” said 23-year-old student James, who witnessed the skirmish.

He said several students who participated had their details published online and at least one had been the target of harassment, including anonymous phone calls.

Nationalist activists listed a pro-Hong Kong demonstrator’s home address in Melbourne on the popular messaging app WeChat, and discussed reporting mainland-born Chinese who supported the students to Beijing authorities for “welfare” when they get home.

At the University of Queensland in Brisbane, a handful of hard-hatted students held its latest demonstration on Friday in support of friends and family back home.

Student activist Drew Pavlou, who has supported the campus protests, was told to “be careful” and received messages from someone who knew his name, claimed to know his whereabouts and threatened to “kill his family”.

“We’re quite afraid for our personal safety on campus and even in Brisbane or going back to Hong Kong, because we fear we might get targeted,” said Jacob Yiu, a 21-year-old protest organizer at UQ.

“Probably the Hong Kong government — even the Chinese government — know what we’ve been doing here, (and might) try to detain us, and we’re quite scared of that.”

Tensions have also been felt in New Zealand, with scuffles flaring at the University of Auckland.

The University of Queensland said it was stepping up security patrols in response to the protests. Monash said security attended Tuesday’s protest but “no action was required”.

Australia’s cash-strapped universities have struggled to respond, weighing support for free speech with the need to sustain a lucrative supply of Chinese students.

More than 181,000 Chinese people are enrolled in Australian universities — by far the largest cohort of overseas students — bringing more than $6.8 billion into the economy each year.

But economic ties run much deeper. The University of Queensland is one of 12 universities that host a “Confucius Institute” — a Chinese government-funded school that teaches language and culture.

In 2012, Monash became the first Australian university to be granted a highly lucrative license to operate in China.

Both universities said it was important to allow students to safely voice their opinions.

The Chinese government does not appear to have tried to quiet the tensions, with consulates in Auckland and Brisbane praising the “spontaneous patriotism” of pro-Beijing students.

And home affairs minister Peter Dutton said that while China was an important trading partner, foreign interference in Australia was at “an all-time high”.

“We are worried about influence on university campuses,” he said.

The Chinese Students and Scholars Association — a government-backed body — has led complaints about the pro-Hong Kong protests.

A local chapter this week complained to the University of Tasmania about “discriminatory, insulting comments” posted around campus regarding Hong Kong.

“The content was malicious and defamatory, and the behaviors were extremely bad” it said, calling on the university to “establish a clean and pure study environment for students”.

Chapters of the association have been accused by US Vice President Mike Pence of policing Chinese students as much as representing them overseas.

The organization told AFP it respected local law and freedom of speech, but urged the university to “pay attention to this issue before it escalates”.

“We are all students, we should focus on our study,” it said.