A presidential visit to the predominantly Palestinian area of the city, which was captured by Israel in 1967, would likely be seen as a gesture of support for the Palestinians.
Biden would possibly visit Al Makassed Hospital, although the plans are yet to be finalized, the Israeli official cautioned. CNN has asked the White House for comment on the possibility of a Biden visit to East Jerusalem.
The hospital in East Jerusalem serves Palestinians, including those from the West Bank and Gaza.
Former US President Donald Trump cut US $25 million in planned funding for the East Jerusalem Hospital Network, which included Al Makassed Hospital.
The Biden administration has pledged to reopen a consulate for Palestinians in Jerusalem, after Trump closed the consulate when he moved the American embassy from Tel Aviv to Jerusalem.
Israeli Prime Minister Naftali Bennett has openly opposed reopening the consulate, saying, “There is no room for another American consulate in Jerusalem.”
For many Palestinians, an American consulate in Jerusalem would be seen as a precursor to what they hope will one day be an American Embassy in East Jerusalem, capital of a potential future state of Palestine.
Biden is expected to visit Israel in late June, the Israeli official told CNN, after accepting an invitation to do so during an April phone call with Bennett.
Tags
American consulate American embassy Biden Israeli officials Jerusalem 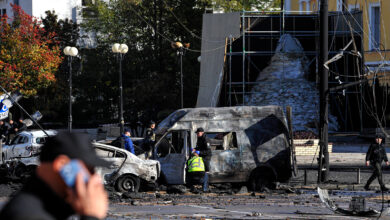 There’s no change in US nuclear posture, sources say, despite Biden’s “Armageddon” warning on Putin’s threats