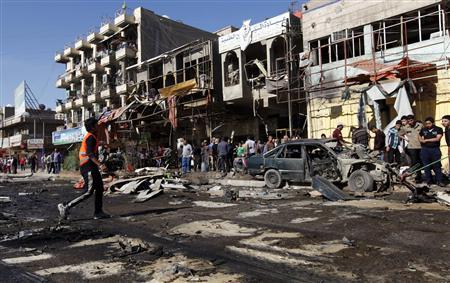 A dozen car bombs and suicide blasts tore into Shia districts in Baghdad and south of the Iraqi capital on Tuesday, killing more than 50 people on the 10th anniversary of the US-led invasion that ousted Saddam Hussein.

Sunni Islamist insurgents linked to al Qaeda have vowed to step up attacks on Shia targets since the start of the year in an attempt to provoke sectarian confrontation and undermine Shia Prime Minister Nouri al-Maliki's government.

Tuesday's bombs exploded in a busy Baghdad market, near the heavily fortified Green Zone and in other districts across the capital. A suicide bomber also attacked a police base in a Shi'ite town south of the capital, officials said.

"I was driving my taxi and suddenly I felt my car rocked. Smoke was all around. I saw two bodies on the ground. People were running and shouting everywhere," said Ali Radi, a taxi driver caught in one of the blasts in Baghdad's Sadr City.

A decade after US and Western troops swept Saddam from power, Iraq still struggles with insurgents, sectarian friction and political feuds among Shia, Sunni and Kurdish factions.

In a sign of concern over security, the cabinet on Tuesday postponed local elections in two provinces, Anbar and Nineveh, for up to six months because of threats to electoral workers and violence there, according to Maliki's media adviser Ali al-Moussawi. The polls will go ahead elsewhere on April 20.

No group has claimed responsibility for the Baghdad blasts, but Islamic State of Iraq, a wing of al Qaeda, has vowed to regain ground lost in its war with US troops. This year the group has carried out a string of high-profile attacks.

Violence is still below the height of the sectarian slaughter that killed tens of thousands after Sunni Islamists bombed the Shi'a Al Askari shrine in 2006, provoking a wave of retaliation by Shia militias.

Complicating security, thousands of Sunni protesters are rallying in Anbar against Maliki, whose government they accuse of marginalizing their minority sect since the fall of Saddam.

Since the last election in 2010, Maliki's Sunni and Kurdish critics have accused him of consolidating his own authority, abusing his control of security forces to pressure foes and failing to live up to a power-sharing deal.

The political crisis has only worsened since American troops left Iraq in December 2011, removing the symbolic buffer of US military power and weakening Washington's influence.