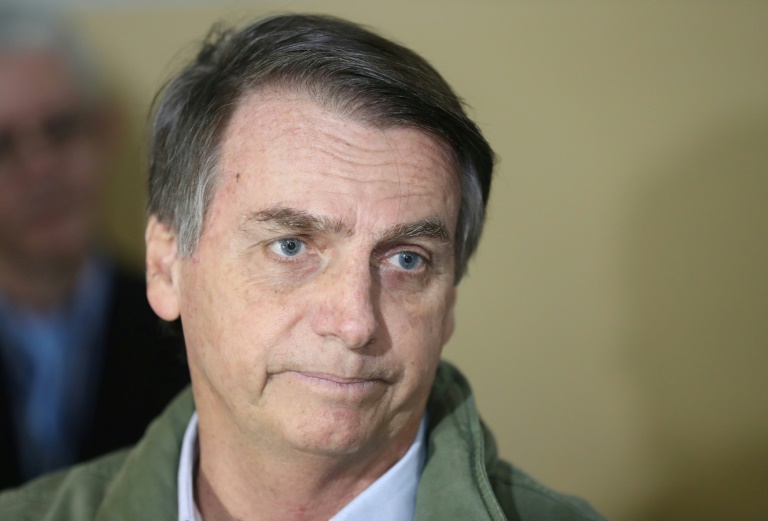 Brazil entered a new era Monday after electing its next president, Jair Bolsonaro, a far-right congressman who vowed a fundamental change in direction for the giant Latin American country.

Bolsonaro, who openly admires Brazil’s former military dictatorship and shocked many with his derogatory remarks on women, gays and blacks, won 55 percent of the vote in a run-off election Sunday — more than 10 points ahead of leftist opponent Fernando Haddad.

Having channeled voters’ anger with corruption, crime and economic malaise, he will now get down to work trying to deliver on the promise he made in his victory speech: to “change Brazil’s destiny.”

Bolsonaro, 63, is due to fly to Brasilia on Tuesday to start the transition process, which will culminate with his swearing-in on January 1.

His schedule includes meetings with deeply unpopular outgoing President Michel Temer, as well as the chief justice of the Supreme Court and the army chief of staff.

After a vitriolic campaign that left Brazil deeply polarized, the country is anxiously waiting to see what Bolsonaro’s presidency will actually look like.

One of his top advisers, economic guru Paulo Guedes, promised Sunday night that the changes would be sweeping indeed, at least as far as managing the world’s eighth-largest economy is concerned.

“We are going to change the social-democratic economic model. It’s terrible. We are prisoners of low growth, high taxes, high interest rates,” said Guedes, a liberal economist trained at the University of Chicago who will head an economy super-ministry under Bolsonaro.

“That model corrupted our politics, made taxes go up and caused our debt to snowball… We need pension reform… and we are going to accelerate privatizations.”

The polls came on the heels of Brazil’s worst-ever recession, a staggering multi-billion-dollar corruption scandal and a year of record-setting violent crime.

Although many voters expressed strong dislike for Bolsonaro, even more rejected Haddad and his Workers’ Party, which had won the past four presidential elections.

Bolsonaro will now face a tall order uniting a divided country — and made few attempts to do so in his victory lap Sunday.

“We cannot continue flirting with socialism, communism, populism and the extremism of the left,” he said in a speech transmitted live on Facebook — the platform he has campaigned on since an attacker stabbed him in the stomach at a rally on September 6, putting him in the hospital for three weeks.

The former army captain, who has vowed to govern “for the majority, not the minority,” has incensed a long list of Brazilians with his demeaning comments.

Haddad, a former Sao Paulo mayor, said Sunday night he would fight to “defend the freedoms of those 45 million people” who voted for him, after Bolsonaro vowed late in the campaign to “cleanse” Brazil of leftist “reds.”

Aides said Haddad, 55, had not called Bolsonaro to congratulate him.

It is not clear Bolsonaro will be able to make sweeping changes.

Working with a divided and discredited Congress, constrained by institutions, and rejected by a large portion of the electorate, he will likely be hemmed in on many fronts.

“Bolsonaro is unlikely to benefit from much of an intense honeymoon,” consultancy Eurasia Group said in a note.

He “will face a polarized society and will probably start his administration with a smaller level of public support in comparison to previously elected presidents.”

Opponents have warned Bolsonaro would try to veer toward authoritarianism, after he openly expressed his admiration for Brazil’s brutal military dictatorship (1964-1985) and its torture of leftist dissidents.

But “we shouldn’t lose sight of the fact that Brazil has one of the most solid democracies in Latin America,” said Leandro Gabiati, head of Brasilia-based consultancy Dominium.

Others were more pessimistic.

“This is a dark day for Brazil. Brazilian democracy is now in complete crisis,” said Mark Weisbrot of the Center for Economic and Policy Research in Washington.