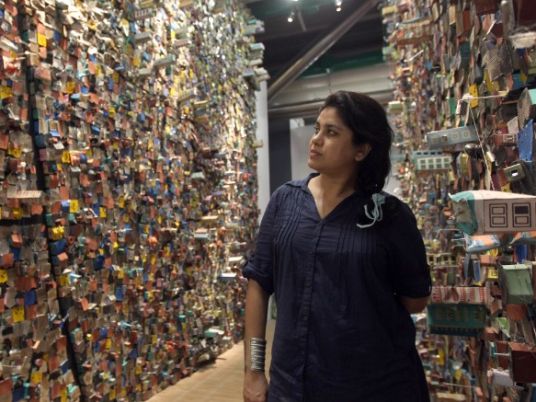 At first glance, the Cairo art installation appears to be a mural in red and purple hues, of three people at a table. Then, one of the subjects pours bright pink paint from a teapot into a cup. Another lights a cigarette, and the scene comes into focus.

Arif uses humans and their surroundings as her canvas, creating what at first appear to be two-dimensional paintings using fluid brush strokes and playing with light and shadows.

"It's crazy to be able to create that optical illusion, from 3D to 2D … When you create something with the human body, people are affected more by it, there’s something more intimate about it," Arif told Reuters.

The child of Saudi and Iranian immigrants to the United States, Arif first signed up to study make-up and body art in Los Angeles last year. After returning to Egypt, she relied on friends, who offered their bodies and time, to experiment.

Cairo-based artist Chanel Arif paints humans for her art project called After Dinner; the concept uses humans and their surroundings as her canvas (Sherif Fahmy / Reuters).

"You’re just like a canvas for someone’s vision and even just to be concentrating to keep a certain mood is really meditative,” May Mansour, one of the models in the installation and Arif's friend, said.

Arif usually starts with a sketch, inspired by an emotion or mood that dictates the palette. In each work, Arif strives to create something that invites the viewer to forget the space they're physically in.

"I like that its bringing art to life. Instead of taking pictures of people and lifelessly observing them, we can see the painting brought to life," Salma Barakat, a spectator at the exhibition, said.

Inspired by American artist Alexa Meade, the concept is new in Egypt's contemporary art scene, where artists can struggle to engage conservative audiences.

"Egypt is the most inspiring place for me… It’s very chaotic and very high-energy and there’s a lot to see and experience," Arif said.