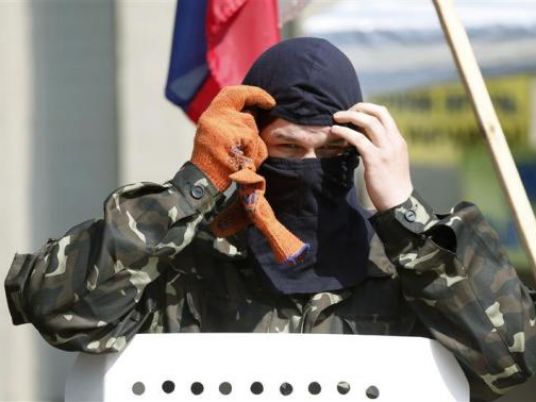 Uneasy calm returned to the streets of Donetsk on Wednesday after the biggest battle of a pro-Russian separatist uprising in eastern Ukraine, a conflict transformed by the landslide election of a pro-European leader who has vowed to crush the revolt.
Government forces killed dozens of rebel fighters on Monday and Tuesday in an assault to retake the airport, which the rebels had seized the morning after Ukrainians overwhelmingly elected Petro Poroshenko as president.
Pro-Moscow gunmen have declared the city of a million people capital of an independent Donetsk People's Republic.
After the government assault – the first time Kiev has unleashed its full military force against the fighters after weeks of restraint – morgues were filled with bodies of rebel gunmen. Some were missing limbs in a sign of the massive firepower used against them.
The separatist authorities say as many as 50 died, including a truckload of wounded fighters blasted apart as they were driven away from the battlefield. The government said it suffered no losses in the operation, which saw its aircraft strafe the airport and paratroops land to reclaim it.
Poroshenko, a billionaire confectionary magnate who became the first Ukrainian since 1991 to win the presidency outright in a single round of voting, repeated his promise to restore government control rapidly over secessionist-held areas.
“We are in a state of war in the east. Crimea is occupied by Russia and there is great instability. We must react,” he told Germany's Bild newspaper. “The anti-terrorist operation has finally begun in earnest. We will no longer permit these terrorists to kidnap and shoot people, occupy buildings or suspend the law. We will put an end to these horrors – a real war is being waged against our country.”
His swift offensive has thrown down a challenge to Russian President Vladimir Putin, who made defending Russians in other parts of the former Soviet Union a pillar of his rule since declaring his right to use military force in Ukraine in March.
Moscow has demanded Kiev halt the military operation in the east, but Putin has also announced the withdrawal of tens of thousands of troops he had massed on the frontier. A NATO officer said on Wednesday thousands of Russian troops had indeed been pulled out, although tens of thousands were still in place.
Moscow says it is willing to work with Poroshenko but has no plans for him to visit for talks. It denies accusations by Kiev and Western countries that it is behind the rebellion.
“I have no doubt that Putin could end the fighting using his direct influence,” Poroshenko said. “I definitely want to speak with Putin and hold talks to stabilize the situation.”
In Donetsk, some shops were closed and streets were quieter than usual, but calm had returned. Around 1,000 miners bussed in from around the eastern Donbass coalfield staged a demonstration in support of the separatists in Donetsk on Wednesday.
"Kiev does not rule us any more, we will no longer accept that," Denis Pushilin, leader of the separatist Donetsk People's Republic which held a referendum on independence on May 11, told the miners. A Ukrainian fighter jet roared overhead, and some gunfire could be heard in the distance, apparently from rebels shooting at the aircraft.
"KIEV JUNTA"
A miner from the state-owned Abakumova mine attending the demonstration who gave his name as Valery said: "I want peace and to be able to work and make money. I want the occupying soldiers to leave and return to their Kiev junta," he said.
Russia and its state media which broadcast into eastern Ukraine have consistently described the government in Kiev, which took power after a pro-Russian president fled in February, as illegitimate and led by "fascists".
But Moscow's position was undermined by the scale of Poroshenko's election victory, and Kiev now appears to feel emboldened to act against the rebels with less threat of Russian retaliation.
A former cabinet minister under both pro- and anti-Russian presidents, Poroshenko won nearly 55 percent of the vote in a field of 21 candidates and commanded support across the east-west divide that has defined Ukrainian politics since independence. His nearest challenger won just 13 percent.
Other potential rivals had bowed out and urged supporters to back the frontrunner in a show of national unity.
The separatists managed to block voting in Donetsk and neighboring Luhansk provinces, but the 10 percent of the electorate kept away from the polls would not have made a difference in the outcome.
Although many in eastern Ukraine are skeptical of the government in Kiev, opinion polls have shown most favor some sort of unity with Ukraine. The majority in the east describe themselves as ethnic Ukrainians although they speak Russian as their primary language.
"We live in Ukraine," said Mikhail, 31, a theater manager. "I work at the Ukrainian Theatre in Donetsk. Would I work at the Donetsk People's Republic Theatre? That doesn't sound so good. I think all this mess is only temporary.
"I didn't vote because we could not vote here, but Poroshenko seems decent," he said. "We will see. Many were elected as decent and then turned into bribetakers as a general rule. I hope he will not let Ukraine down."