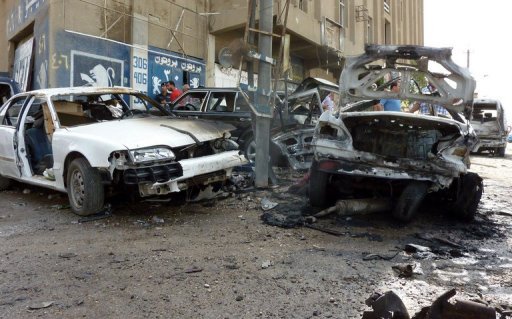 A series of car bombs exploded in busy areas in predominantly Shia neighborhoods of Baghdad on Monday, killing at least 42 people and wounding dozens more, police and medical sources said.

The deadliest attack took place in Sadr City, where a car bomb blew up near a place where workers had gathered. It killed at least seven people, including two soldiers

It was not immediately clear who carried out the attacks, but hardline Sunni militants who view Shia as non-believers have been stepping up their insurgency and striking with a ferocity not seen in years.

Shia, security personnel government employees of both sects and governmental-backed Sunni "Sahwa" militia members are prime targets for Al-Qaeda and the Sunni insurgents.

On Sunday, a suicide bomber blew himself up inside a mosque where a Shi'ite funeral was being held, killing at least 40 people in Mussayab, 60km south of Bagdad.

The United Nations mission in Iraq said about 800 Iraqis were killed in acts of violence in August.