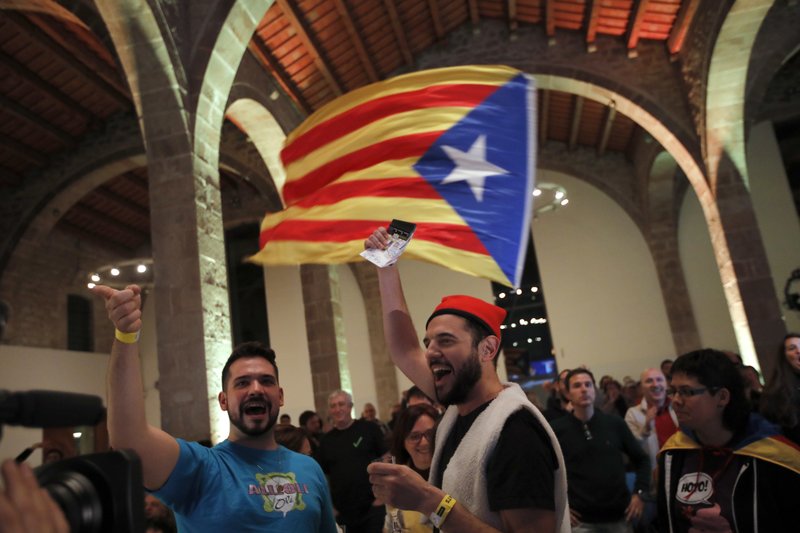 Catalonia’s secessionist parties won enough votes Thursday to regain a slim majority in the regional parliament and give new momentum to their political struggle for independence from Spain.

It was hardly an emphatic victory, however, as the separatists lost support compared to the previous vote in 2015, and a pro-unity party for the first time became biggest single bloc in the Catalan parliament.

The result left more questions than answers about what’s next for Catalonia, where a long-standing push for independence escalated to a full-on clash with the Spanish government two months ago.

It was also a blow to Spanish Prime Minister Mariano Rajoy, who as a result of the separatists’ defiance ousted the Catalan Cabinet and called the early election hoping to keep them out of power.

Instead, the election’s outcome favored fugitive former Catalan leader Carles Puigdemont, who campaigned from Belgium where he is evading a Spanish judicial probe into the attempt to split from Spain. The investigation could lead to charges of rebellion and sedition that carry penalties of decades in prison.

Puigdemont, who got the most votes of any separatist candidate, greeted the results with delight and called them a rebuke to Spain’s central government.

“The Spanish state has been defeated,” Puigdemont said. “Mariano Rajoy has received a slap in the face from Catalonia.”

In a televised appearance from Brussels, the 54 year-old former journalist didn’t make clear if he would try to return home, where an arrest warrant awaits him.

The other main winner was Ines Arrimadas, the leading unionist candidate. Scoring 25 percent of the votes, her pro-business Ciutadans (Citizens) party won 37 seats, which will be the biggest single bloc in the 135-seat regional assembly.

“The pro-secession forces can never again claim they speak for all of Catalonia,” Arrimadas said, promising her party will continue to oppose the separatists. “We are going to keep fighting for a peaceful co-existence, common sense and for a Catalonia for all Catalans.”

But pro-independence parties — Puigdemont’s Junts per Catalunya (Together for Catalonia), left-republican ERC and the anti-capitalist CUP — together won 70 seats, two above a majority but two less than in the previous parliament. The three groups fell short of winning a majority of votes, though, getting 48 percent of the total.

“The election has resolved very little,” said Andrew Dowling, a specialist in Catalan history at Cardiff University in Wales. “Independence has won but in a way similar to 2015 — majority of seats but not in votes.”

Dowling said that with the independence vote not reaching over half of the ballots cast, the European Union was not likely to get involved although the bloc will be keen on seeing the Spanish government actively address Catalonia’s grievances.

Rajoy has said that taking over control of the region again would be something he would consider if independence is sought by a new Catalan government. Spain’s constitution bars secession.

Thursday’s election saw a record turnout of nearly 82 percent of the 5.5 million eligible voters in Catalonia.

The election was held under highly unusual circumstances, with several pro-independence leaders either jailed or in self-imposed exile for their roles in staging a banned independence referendum that was declared illegal by Spain’s highest court.

Eight of the absent politicians were elected as lawmakers. Unless their status changes, they will have to renounce their seats and pass them on to other party members or else the pro-independence bloc could be down a crucial share of votes.

Weeks of campaigning involved little debate about regional policy on issues such as public education, widening inequality and unemployment. At the heart of the battle instead was the recent independence push that led to Spain’s worst political crisis in decades.

Tensions have been high in Catalonia since an October 1 referendum backed independence, when Spanish police used rubber bullets and batons against voters who tried to block them from removing ballots from polling stations. Separatist regional lawmakers made a unilateral declaration of independence October 27, prompting Spain’s national government to take the dramatic step of firing the regional government and dissolving the Catalan parliament. Courts later ordered the arrest of the former Catalan leaders.

No incidents were reported during voting Thursday.

A new Catalan attempt to secede would also be an unwelcome development for the European Union, which is already wrestling with legal complications from Britain’s planned exit from the bloc. Senior EU officials have backed Rajoy, and no EU country has offered support for the separatists.

Catalonia’s independence ambitions also have scant support in the rest of Spain.

The outcome of the political battle is crucial for the region, which accounts for 19 percent of Spain’s gross domestic product. An economic slowdown has been the most immediate consequence of the Catalan independence push. Spain’s central bank last week cut its national growth forecasts for next year and 2019 to 2.4 percent and 2.1 percent, respectively, cutting a percentage point off its previous predictions and citing the conflict in Catalonia as the cause.

Barely a quarter of Catalans want split from Spain: poll