The last time Nermine Hammam’s work hung in a gallery in Cairo, the streets of Egypt spoke a different language. In April 2010, Hammam exhibited "Metanoia" at the Townhouse Gallery, a collection of photographs taken during a six-week stay in a public hospital for developmentally disabled patients in Abbasseya. Under orders from the Ministry of Health, the exhibition was heavily censored; the faces of patients concealed with thick black bars covering their eyes. Those closely involved in "Mentanoia" accepted the interference begrudgingly.

Following "Metanoia," Hammam began exhibiting exhaustively abroad, from France and Greece to Cuba and Argentina, fueled by both better opportunity and the sting of being censored in her home country. Her work reacted as well; her subsequent project was a response to the sheer emotional exhaustion of "Metanoia," both the transformation she had undergone as an artist documenting unbridled human suffering, and the backlash against her work and the messages she was struggling to portray.

Hammam retreated into the Fayoum Oasis with her daughter and cousin, choreographer and dancer Karima Mansour, creating "Anachrony" in an attempt to heal. Hammam reflects that she had wanted to do something non-confrontational, something “non horrific… It gets tiring doing the horrific all the time.” The choice to drape her two subjects was a subconscious reaction to the suffocation she felt throughout the process of creating and exhibiting "Metanoia." In "Anachrony," she explains, the wind is the true architect of the images, and her relief at relinquishing such responsibility is visible. 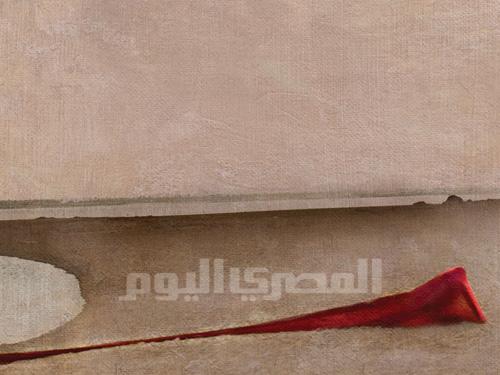 "Anachrony"'s desert landscape scenes depict her two subjects wrapped in massive sheets of colored cloth. The palette is cool and subtle, and the figures drift between the foreground and background. The cloth drapes closely to their bodies and then stretch far from them, pulled by the distance between the figures or an object within the landscape itself.

Sixteen images chosen from "Anachrony" are now on view in the SafarKhan Gallery in Zamalek. The narrowed, two-storied space meant that onlookers at the 27 March opening were sometimes relegated to examine the works from behind the windowpanes on the sidewalk. But while the party spilled into the street, the works themselves were not cramped. Each image is neatly hung in a light brown frame, and the space, whitewashed with dark wood trim, has an overall crisp feel.

But it is the images themselves that really drive this sensory experience. From afar they look like watercolors: thick brushwork and blending colors splash across the canvas. The huge clouds and hanging skies invoke a reverse-impressionistic effect; instead of the image unfolding up close, it flattens. Upon closer inspection, these painterly techniques compress onto the printed page. Hammam’s trademark layering and hand-painting over her photographs had taken place many stages before.

Hammam’s process as a photographer is noticeably influenced by her experience in graphic design. Heavily reworking and repositioning her original photographs, Hammam will often spend hours pouring over a single work, explaining that it is the image itself that dictates the need for digital manipulation.

And yet in "Anachrony" the viewer senses something may have been left out. One familiar with Hammam’s oeuvre would notice it immediately: a lack of controversy or visible drama. Throughout her career as an artist Hammam has sought out intense subject matter. In the 2006 series "Ashoura" she documented the dramatic and bloody Shia re-creation of the massacre of Hussein, grandson of the Prophet, in Nabatieh in southern Lebanon; the intensity of this event only magnified by Hammam’s technical alterations. Now exhibiting "Anachrony" in response to the dramatic and controversial"Metanoia," ironically Hammam self-censors her images, completely veiling her subjects and working in muted tones. 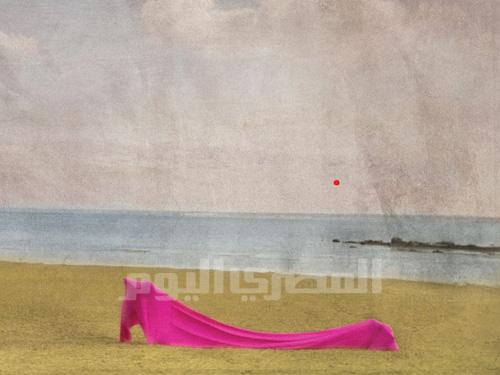 In the immediate wake of 25 January 2011, Hammam took her family to London, but shortly in exile she decided she belonged in Cairo, returning in the early days of February. She photographed “hysterically,” and with tanks on every corner, Hammam was never short of controversial material. She shot over 60,000 frames, but it is unclear if the images, currently unfinished, will ever be exhibited in Egypt, given the overall uncertainty of public sentiment. While some barriers in the public sphere have fallen, there remains a collective breath holding due to constantly shifting sensitivities.

When asked about her upcoming projects, Hammam mentions a possible revisit to her 2009 "Escaton" series, which was photographed on the Sokhna beaches and depicts veiled women and their interaction with the sea. At the time the work did create a ripple of public controversy, but viewing it from 2012 re-positions the subject matter. Today, the frame would be wider, as Egypt stands in the middle of a political, economic, and cultural overhaul. Conservatism, now openly visible in Egypt’s Parliament and daily lexicon, has become a touchy subject, and attracts strong sensitivities among those currently in power.

It begs the eternal question: Is art controversial due to its content or its reception? Would "Metanoia" be acceptable in the public sphere now because of prevalent anti-regime sentiment? What would happen if Hammam were to exhibit images that confronted the current regime?

It is a question Hammam does not have the energy to find the answer to. For now, she will settle for catharsis.

"Anachrony" runs through 14 April 2012 at the SafarKhan Gallery located at 6 Brazil Street in Zamalek.