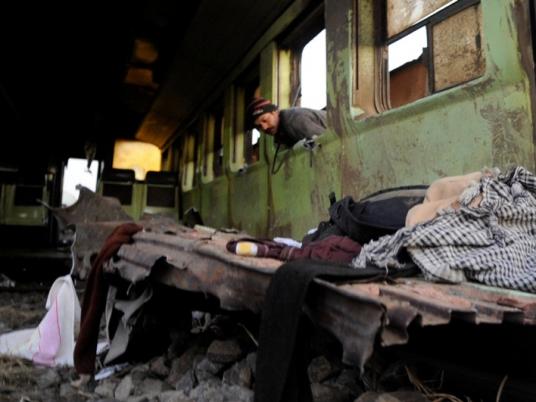 A 12-car train carrying hundreds of Central Security Forces conscripts left Upper Egypt for Cairo on Monday afternoon. Before midnight, the train derailed in Giza, leaving 19 of its passengers dead and another 120 wounded.

This is not an unusual occurrence, coming as it did a few hours after a court ruling regarding a similar crash in November, which claimed the lives of 51 children.

President Mohamed Morsy on Tuesday briefly visited some of those injured in the incident at the Maadi Military hospital, while high-ranking Freedom and Justice Party member Saad al-Katatny was quick to publicly blame the toppled Hosni Mubarak regime for its negligence of the nation’s infrastructure. Meanwhile, protests broke out in Cairo and Alexandria against the ruling regime for so far failing to effectively respond to the nation’s myriad problems, infrastructure among them.

Abdel Hamid al-Shawah, former railway authority vice president, says the car went off the track when the brakes fell off and got under its wheels, hoisting it up.

Maintenance is to blame for allowing the train to operate without the holder that is supposed to be in place under the breaks to prevent them from falling, he says. He also blames poor oversight over the meager capacities of available maintenance shops.

The train kept going for a few miles with the car off the rail until it hit a parked merchandise train upon entering Badrashin Station. One of many necessary safety precautions missing from the railway system, Shawah says, is the presence of sensors along the rail that detect the overheating of the wheels due to the friction and alert the next station to stop the train, which could have prevented this wreck.

“The whole railway station needs a big investment to develop it in order to avoid these accidents. We are working with a very primitive system,” he says.

Ahmed Korashy Ahmed, a 20-year-old conscript from the village of Bardis, was on the train when it derailed. With a patch on the back of his head, a heavily bandaged arm, and a few scattered cuts and bruises, Ahmed, who lost friends in the crash and considers himself “blessed to be alive,” recounted the train ride.

He says the recruits were told by a colonel in Assiut that it was a nonstop train to Cairo, but they stopped three times for 20 minutes or less during the journey.

“Some of us tried asking why we’d stopped and if there was anything wrong, but we’d be told immediately to be quiet, sit down. What are you going to do?” he shrugs.

He was asleep for the third stop and then he says they had arrived in Minya when he woke up.

“Some of the guys who were awake, though, were saying they saw soldiers getting off the train at the stops and gathering around the last two cars,” he recalls. “Like they were checking to make sure everything was okay. I didn’t see this myself, but I trust the people who told me they say it.”

Again the passengers asked if anything was wrong.

“I fell asleep again after we started moving, and woke up because of how strongly the car was rocking. The first thing I noticed was the wind, and the dust, moving through the car with such strength. I told myself, ‘We must be going very fast,’ and then there was a sound like a bomb.

“I don’t know what happened. I don’t think any of us realized. There was no moment of realization. We were all stunned. I remember seeing us all slowly getting up, those of us that did, and I remember thinking, ‘This is the afterlife.’ I’m sure the others felt this way too. Then I noticed the back of my head was bleeding very badly, even though I couldn’t feel it,” he says.

“The staff at the Badrashin Hospital did all that they could. But what are they going to do? My friend — with whom minutes before the train left the station we were eating and laughing together — his twin was also in the train, and he died in Badrashin.

“He’s a conscript who died not in a war, mind you, but a train accident,” he says, adding that the victim's brother also had his leg severely injured.

“These accidents happen a lot,” Ahmed sighs. “They just keep happening. I don’t blame one person; I don’t think there is a person to blame. I blame negligence in general … Whether it’s the Armed Forces that was being negligent, or the railways, the result is the same,” he says, adding that this crash may be different.

“Some accidents are caused by negligence, but others seem like there might be more to them. I don’t want to accuse anyone of anything, I’m just asking, how can two cars just detach? Two whole cars? I was in the last one, and this is a crime. I saw things … thank God for everything, but I saw some really horrible things. God spare you such sights.”

Asked how he plans to return home, Ahmed says, “I’m not taking the train back to Bardis. Of course not. How can I? And I’m not going back to the service either. How can I after this,” he asks.

“People might think that for soldiers and conscripts, it’s different. That we might feel secure, or more secure, in this country now. This is not true. There is no sense of security.”

“In the hospital here, now, they’re great. They’re very considerate and are giving us excellent care. But this is just here, and just now, and because of the train accident.

“I’m not taking the train back home,” he insists. “I’m not going back to the service. I don’t care if they threaten to kill me. At least I’d die in my own home.”

Activist Ahmed Douma, who went with a group to check on the injured, said the hospitals treating the victims were unprepared, unhygienic and lacked basic supplies. One doctor and three nurses tended to 76 injured people at Hawamdeya Hospital, leaving the volunteer doctors who came with the activists to do most of the work, he says.

“There was a real crisis. We brought the supplies and the doctors with us. The only thing left was for us to bring our own hospital,” he says.

The system also made the blood donation to the victims difficult. The hospitals of Hawamdeya and Badrashin, where the victims were initially transferred, did not have a blood donation unit and asked donors to go to Qasr al-Aini Blood Bank.

The Qasr al-Aini Blood Bank, however, refused to open its doors for donations until the morning, Douma says, requesting an investigation into the refusal that may have cost lives.

The prosecution gave autopsy reports directly to police without allowing victims' families or their lawyers to see the results, Douma alleges. Activists and lawyers also fought with the prosecution, which wanted to release burial permits without the consent of the families who hadn’t arrived at the hospitals yet.