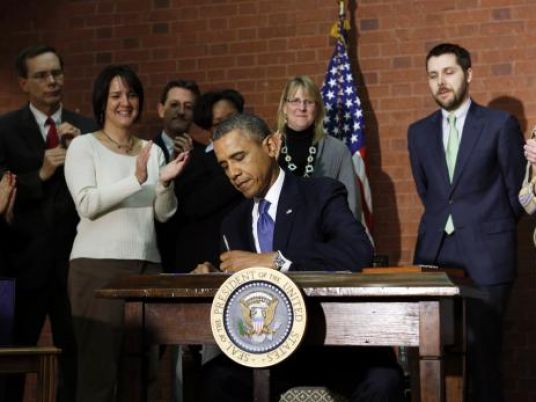 China's Commerce Ministry has condemned a $1.1-trillion spending bill passed by the US Congress last week over clauses that limit technological purchases from the Asian giant, saying they clash with the principles of fair trade.
The bill, signed by President Barack Obama on Friday, included a cyber-espionage review process for federal purchases of technology from China, a measure incorporated last year amid growing US concern over Chinese cyber attacks.
In a weekend statement, China's Commerce Ministry said the move "went against the principles of fair trade" as it sought to curb purchases of Chinese technology and export of satellites and parts to China.
"China is resolutely opposed," the ministry said in comments attributed to an unnamed official in its US trade division.
The bill sent a wrong message, did not aid exchanges and cooperation in the high-tech field and would have a negative effect on Chinese companies, besides harming the interests of US firms, it added.
"We have noted that US business groups have already made noises opposing the bill. The US side should correct its mistaken ways, and create good conditions for the healthy development of Sino-US trade and business cooperation."
Last year's funding legislation bars US space agency NASA and the Justice and Commerce Departments from buying information technology systems without the approval of federal law enforcement officials.
That formal assessment must include "any risk associated with such system being produced, manufactured or assembled by one or more entities that are owned, directed or subsidized" by China, it says.
US Representative Frank Wolf, the Republican chairman of the House Appropriations Commerce-Justice-Science subcommittee, said he directed the language to be included last year because of concerns about potential cyber threats from Chinese firms such as Huawei Technologies Co Ltd and ZTE Corp.
Wolf cited a 2012 congressional intelligence report that found such firms were closely connected to China's army, which coordinates cyber espionage against the United States.
"A slightly modified version of this language was continued again this year by bipartisan agreement with the Senate, and I believe it should be maintained and expanded to all civilian federal agencies in the year ahead," Wolf said in a statement on Friday.
US curbs on foreign access to satellite technology since 1999 have effectively banned the export, re-export or transfer of this equipment or know-how to China.
The restriction followed a 1996 Chinese rocket launch accident that claimed a US-manufactured satellite. In the course of the investigation, the company was accused of inadvertently transferring restricted technology to China.
But there were no new curbs on satellite exports in the latest spending bill, Kevin Wolf, a US Commerce Department official, told Reuters in Washington.
"Since the late 1990s, there has been, under US law, an absolute prohibition on the export and re-export to China of all satellites and related items," said Wolf, who is no relation to the congressman. "This was reconfirmed in the National Defense Authorization Act of 2013."
"The Chinese have complained about it a lot over the decades – that's not new," he said on Saturday.
China and the United States have clashed repeatedly over trade issues.