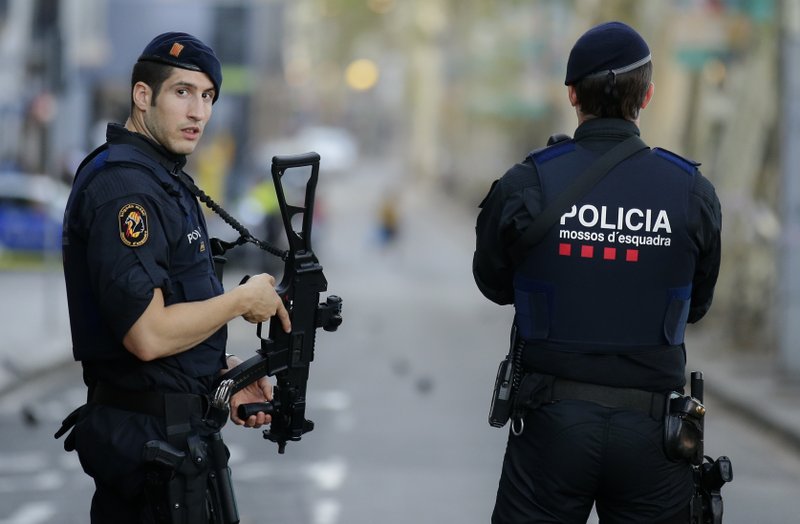 From Barcelona to Times Square and beyond, extremists have used vehicles as deadly weapons with alarming frequency in recent years, whether to promote jihad, get attention or express despair.

In response, ugly concrete blocks as well as more aesthetic deterrents are sprouting up in front of landmarks and ordinary public places around the world. Security experts say such barriers would have minimized the fatal damage wreaked on Spain this week, yet warn that as long as motor vehicles exist, some risks will always remain.

While cars and trucks have been used for scattered violence for generations, the last 13 months have seen nearly a dozen vehicle-ramming attacks in Europe and the US, as well as car bombings in the Mideast and beyond. Here are some ways cities and governments are countering the threat:

THE BASIC BOLLARD — AND HOW TO IMPROVE IT

Whether a post dug into a sidewalk or an unwieldy hunk of concrete, bollards are the most common anti-car shield. Impact engineers study the ideal height and shape of such barriers to resist damage from various vehicles. Intelligence agencies are increasingly working with manufacturers on optimal bollard design. 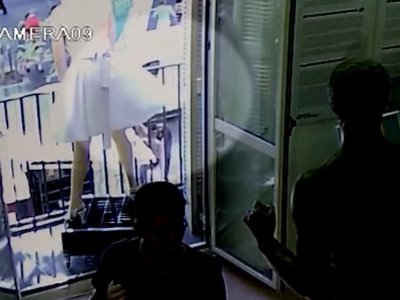 Security cameras at a museum on Barcelona’s Las Ramblas promenade shows the moment when the van used in Thursday’s fatal ramming attack sped down the avenue. (Aug. 18)

One notably ended a rampage in Times Square in May by a mentally disturbed driver who ran down 23 people. New York City has installed steel bollards all around town, and some streets near the stock exchange, the 9/11 memorial and police headquarters have retractable barriers that prevent vehicles entering at all.

The use of bollards is more widespread in recent years, but not ubiquitous. After a Tunisian claiming links to the Islamic State group killed 86 people on a Nice beachfront last year with his truck, residents questioned why city authorities hadn’t installed barriers, even though IS extremists had explicitly encouraged followers to “crush” enemies with cars.

Because permanent barriers usually need to be anchored deeply to resist a vehicle’s impact, they aren’t generally installed on bridges, which were the targets of two attacks in London this year.

Engineers are tackling that challenge with new synthetic materials that can withstand major impact without needing a deep anchor, according to Margaret Gilmore, expert on intelligence at Britain’s Royal United Services Institute.

Scotland Yard reviewed the security of 33 bridges around the British capital, and several were fitted with special vehicle-resistant barriers as a result.

Spain’s La Vanguardia newspaper reported Friday that barriers were being installed in the popular Mediterranean tourist destinations of Calafell, Calella and Reus a day after a van plowed through a crowd in Barcelona, killing 13 people and injuring 120 others.

ADAPTING THE ENVIRONMENT FOR SAFETY

The British soccer club Arsenal’s stadium is seen as a model for incorporating “vehicle exclusion” security into its landscape: It’s surrounded by giant cannons, concrete benches and huge letters reading ARSENAL that are big enough to stop a multi-ton truck from reaching the crowds.

Train stations are expanding pedestrian zones on their perimeters, to further cushion passengers from vehicular threats.

Since last year’s truck attack in Nice, the city has launched a 30 million-euro ($35.3 million) security effort aimed primarily at “keeping pedestrians and vehicles as far apart as possible,” according to municipal security chief Lauriano Azinheirinha.

That includes a four-kilometer (2.4-mile) stretch of waist-high posts connected by steel cables along the glistening shorefront Promenade des Anglais, as well as remote-controlled extendable posts and a citywide sensor system.

Cities can also deploy temporary measures to keep car attacks at bay. In apparent response to the Barcelona violence, a row of police vans lined the front of the Eiffel Tower on Friday, forming a makeshift barrier between the nearest street and the already heavily secured ticket line, which was packed with summer tourists from all over the world.

Drivers who targeted Nice, London and Barcelona all used rented vehicles in their rampages, prompting calls to crack down on rentals with closer checks of applicant drivers and a codified system for reporting suspicious renters.

In Britain, guidance for armed police been revised so that firing at a vehicle on the move is accepted for incidents such as those seen in Nice and Westminster.

All these protections don’t come cheap. Azinheirinha in Nice has urged a collective EU project to protect pedestrians in Europe’s leading cities.

Heightened intelligence efforts are also essential, said Gilmore. The focus “has got to be on stopping them … once they’re radicalized but before they carry out an attack,” she said.

“Intelligence agencies are having successes on this front,” she said, and while they cannot prevent everything, “this sort of incident remains unusual.”

But vehicle attacks aren’t always driven by Islamic extremism or the result of lengthy plots. On Monday, a 32-year-old security guard under the influence of drugs accelerated his BMW into a French pizzeria, killing an adolescent girl for reasons that remain unclear.

Maki Haberfeld, a professor at John Jay College of Criminal Justice, said heavily armed police officers are a better deterrent but open settings like Times Square will always be an appealing target.