Your next trip through airport security could be manned by mice.

Why not?
Airports already employ dogs as therapists and llamas as bodyguards (yes, really).
In fact, animals hold a range of jobs in the travel industry.
Dogs: The therapists
For over two years, Los Angeles Airport has been offering passengers free therapy from a troupe of canine shrinks.
These PUPs (an acronym for Pets Unstressing Passengers) roam the airport's post-security screening areas to offer comfort to nervous fliers.
Last month, the dogs were even honored by the Los Angeles City Council.
"When traveling grows stressful, when passengers feel weary, or restless, our four-legged, tail-wagging volunteers dutifully answer the call," noted Councilman Bob Blumenfield at the ceremony.
Cats: The mascot 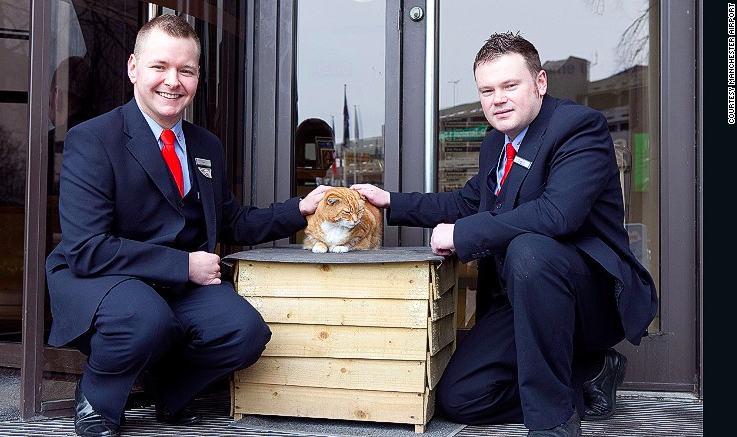 For years, Manchester Airport had a mascot in Olly, a one-eared tabby that wandered into the airport and called it home.
England's Manchester Airport unintentionally adopted a mascot in the form of a one-eared ginger cat who'd taken up residence around the airport's main office block, Olympic House.
Staff adopted the cat and named her Olly (before realizing her gender).
For several years, Olly lived in a shelter built by staff between Terminals One and Three.
She captured public imagination, and not only had a dedicated Facebook page with 2,500 friends, she even had a plane named after her.
Alas, Olly passed away from pneumonia earlier this year, and currently has a memorial plaque at the airport.
Falcons: The air traffic controller 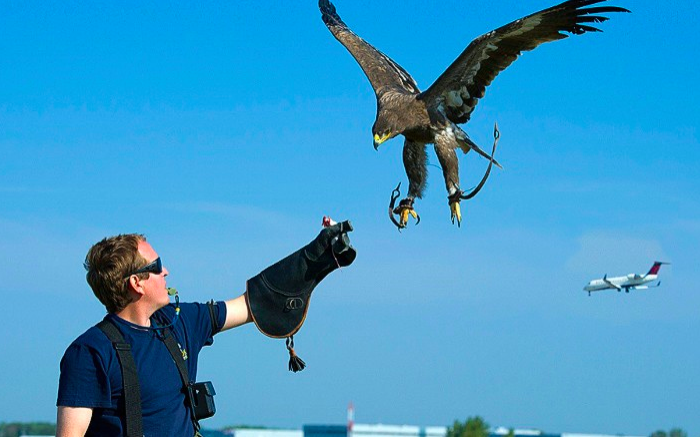 Falcon Environmental Services is one company that uses falcons to direct birds away from places during critical moments of takeoff and landing.
One of the biggest threats to airplanes is birds.
In the United States alone, there are nearly 14,000 bird strikes each year.
The result can be minor, like exterior surface damage to the plane, or it can be major, like total loss of an aircraft, according to Mark Adam, owner of Falcon Environmental Services, a company that uses falcons to direct birds away from planes during the critical moments of takeoff and landing.
"It's a method used extensively to control birds," notes Adam, adding that it's one of the more humane methods of preventing bird strikes.
"You're not going up there and killing the birds, you're using the predator-prey relationship that falcons and nuisance birds commonly have in the wild, but you're using it to your own benefit."
Another advantage is that falcons can cover a great deal of distance.
"Airports are large," he says, "and falcons can control that area in a manner that is 100 perfect efficient." 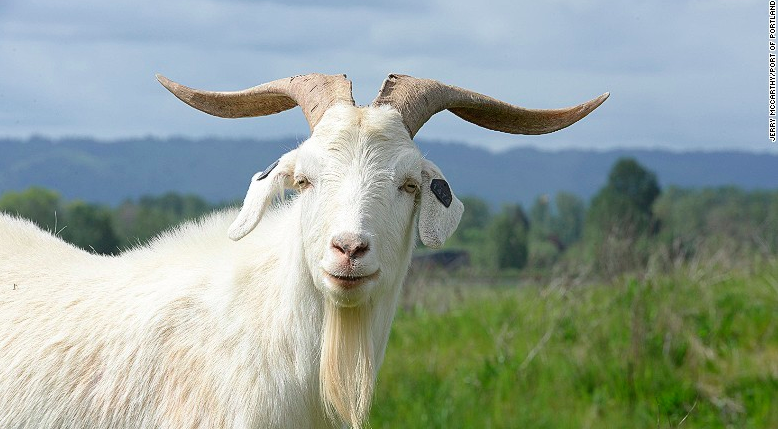 Port of Portland employed goats to manage vegetation around the airport.

In trial programs at Portland International Airport and Chicago O'Hare, authorities have started experimenting with an eco-friendly version of lawn maintenance.
Portland has eschewed herbicides and employed a troupe of goats to manage the vegetation around the airport.
"Goats are a viable alternative tool for areas where time is not an issue, machinery is not an option, vegetation is thick and deep and/or worker safety may be an issue," says Kama Simonds, spokeswoman for Portland International.
O'Hare recently employed a range of animals from a nearby animal rescue facility, including goats, sheep, llamas, burros and alpacas, to tackle some of the dense vegetation that grows around the airport.
"The herd acts as an alternative to toxic herbicides and the use of equipment that produces emissions," explains Karen Pride, director of media relations for the Chicago Department of Aviation.
"The removal of overgrown areas also reduces the habitat of wildlife such as birds that can be hazardous to flight activity at and around O'Hare," she says.
Llamas: The bodyguards
The goats at Portland International Airport face dangers that traditional landscapers don't: coyotes.

In order to protect the goats, PDX also employed a bodyguard in the form of a llama.

"The llama was a coyote-deterrent, for the protection of the goats," says Simonds.

Israeli security firm Tamar Group are developing an explosive detection system manned by mice.
The firm's vice president, Yuval Amsterdam, has spoken of the advantages of using the furry creatures — namely, they have an excellent sense of smell, are easy to train and are small, hence easy to transport.
Contained inside cages, the mice, if one day employed, would sniff passengers and luggage for traces of explosives and other substances.
Bees: The anti-drug wardens
Researchers from Germany's University of Giessen found that honeybees could be trained to detect drugs.
Research published in Plos One discovered that the bees could be trained to fly away from the smell given off by narcotics.
One advantage to using bees over dogs is that they're easier to train and would be more cost-effective.
Tags
airports animals employ of animals at airports usage of animals at airports 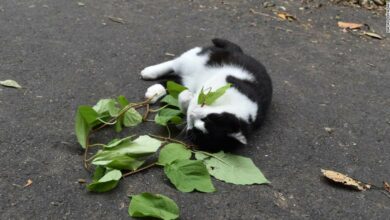 Dogs of war: the conflict in Ukraine is displacing pets as well as people