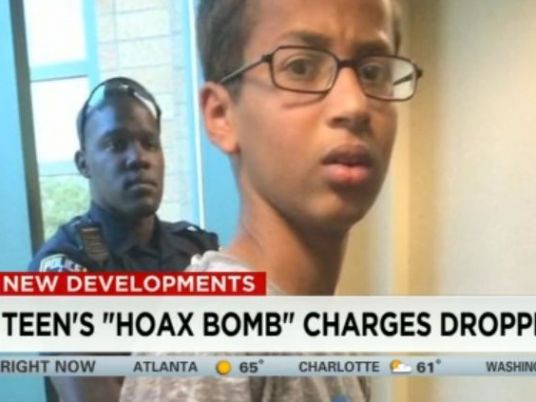 Fifteen million dollars and apologies from the mayor and police chief.
That's what an attorney says the family of Ahmed Mohamed is demanding from city and school officials in Irving, Texas, or they say they'll file a civil suit.
In September, 14-year-old Ahmed made international headlines when he brought a handmade clock to school to show his teachers.
One of them thought it was a bomb and notified school authorities, who then called police. Ahmed was detained, questioned and hauled off in handcuffs. At the time, the school said it reacted with caution because the contraption that had wires could have been an explosive device.
It wasn't. It was just a clock.
In a whirlwind of publicity about the case fueled by social media, #IStandWithAhmed became a trending topic on Twitter, President Barack Obama invited the teen to attend an event at the White House and a foundation offered him a scholarship to study in Qatar.
But despite the surge of support for Ahmed, the attorney representing his family says the teen suffered severe psychological trauma and that his "reputation in the global community is permanently scarred."
In two letters sent Monday to attorneys representing the school district and the city, attorney Kelly Hollingsworth says that Ahmed's civil rights were violated by the way the case was handled.
Irving city officials told CNN they were reviewing the letter and had no comment.
School district spokeswoman Lesley Weaver told CNN that the district is aware of the letter and also had no comment.
Hollingsworth, who says he was recently retained by the teen's father, alleges that the teenager was not read his Miranda rights during his arrest and that those involved with the incident tried to cover up mistakes "with a media campaign that further alienated the child at the center of this maelstrom."
Rather than calming the situation, Hollingsworth says in the letters, officials in Irving stoked the flames.
"They tried to push responsibility off on the victim — Ahmed. They have even implied publicly that what has come of this has been good for Ahmed, as though the resilience of this fine boy and his fine family somehow excused what they did," the letters say. "It does not, for there is no excuse."
Hollingsworth argues that the damages are numerous but difficult to quantify. He notes an online blog post that superimposed the 14-year-old's face onto a famous image of Osama bin Laden, a "Clock Boy" Halloween costume on a website and harassment suffered by the teen's siblings.
"Ahmed will now forever be associated with bomb making wholly without basis," Hollingsworth says.
Among numerous allegations, the letters say that the authorities interrogated the Muslim teenager, alone, for at least one hour and 25 minutes, a period that was recorded on a police officer's iPhone. At one point, according to the letters, a police officer who first saw Ahmed said, "Yep. That's who I thought it was."
"Ahmed clearly was singled out because of his race, national origin and religion," the letters say.
If officials don't comply with the family's demands for apologies and compensation for the damages within 60 days, the letters say, a civil lawsuit will be filed.