Claims like “COVID vaccines make you infertile!” have been swirling around social media for months.

At first, it was only women who had to worry about their fertility after a coronavirus vaccine. And the proponents of the claim say they can explain it biologically.

They say that vaccines produce antibodies that not only attack SARS-CoV-2, the virus that causes COVID-19, but also a protein that’s needed for a placenta to grow in the womb.

But scientists say that is a myth.

Take mRNA vaccines, such as those by the companies BioNTech-Pfizer and Moderna.

This is how the vaccines work: The vaccines hold a “blueprint,” in the form of mRNA, for a bit of SARS-CoV-2, the virus that attaches itself to our cells and infects us. We’re talking about the so-called spike protein that pokes out of the surface (or membrane) of the virus.

When the body reads that blueprint, the body produces a version of that spike protein itself and that kickstarts an immune response. It’s important to note that the body does not reproduce harmful parts of the virus!

Based on those internal proteins, the body produces antibodies to fight what it thinks is an invasion by the SARS-CoV-2 virus. And that then gives you a good measure of protection against real attacks in the future. 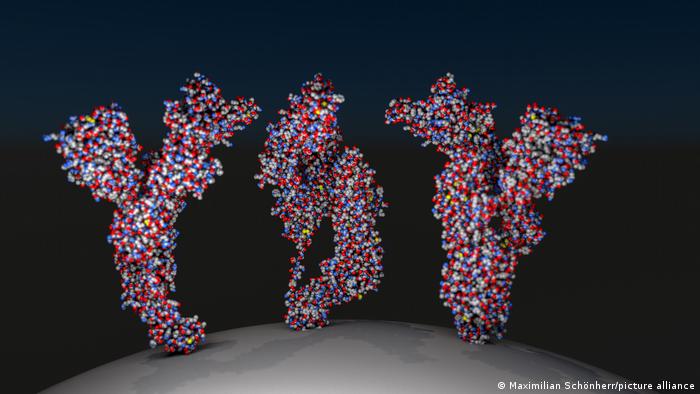 The claims go on to suggest, however, that those antibodies attack another protein called Syncytin-1. It’s that protein that helps placentas grow in the womb, and which is necessary for a successful pregnancy.

The reasoning of those people peddling the claim is that Syncytin-1 and the spike protein have a similar appearance.

But research indicates that actual similarities are very small, indeed.

The SARS-CoV-2 spike protein consists of 1,273 amino acids, while the Syncytin-1 protein has 538. Researchers have so far only found one sequence of five amino acids that shows any similarity between the two proteins. Even that sequence is not totally identical. And that’s where the similarities end.

German researchers, such as Udo Markert and Ekkehard Schleussner of the University Hospital in Jena, Germany, have spoken out about the claims.

They point out that if it were true that an immune response produced by a vaccine can make you infertile, then it would also have to be true that a COVID-19 infection can make women infertile.

Ekkehard Schleussner heads the department of obstetrics at the university hospital. And Markert heads its placenta lab. Markert is also the president of the European Society for Reproductive Immunology.

“As far as we’re concerned, in the field of placenta research and reproductive medicine, these widely spread claims are completely unfounded!” write Markert and Schleußner in a joint statement.

They advise every woman to get a vaccine to protect against a COVID-19 infection.

But it’s not just women who are worried. Some of the claims also target men, saying COVID vaccines negatively affect male fertility, as well.

But a study out of the United States suggests otherwise.

The researchers investigated sperm from 45 men before and after they’d had a mRNA COVID vaccine, and found no negative effects.

“We found no evidence to suggest any negative effects from a COVID vaccine on sperm among the men in our study,” Daniel Nassau told DW.

Nassau, who is a urologist and co-author of the study, said he was confident that a larger number of participants would have delivered the same result.

Meanwhile, another author of the study, Ranjith Ramasamy, has written in The Conversation that the real threat to fertility is a COVID-19 infection.

Ramasamy, who is a professor of urology at the University of Miami, writes that “contrary to myths circulating on social media, COVID-19 vaccines do not cause erectile dysfunction and male infertility.”

And he and his team say they have proved it. They studied testis tissue collected from the autopsies of men who tested positive for COVID-19, along with that of those who died for other reasons.

Ramasamy says their results show that the virus can affect sperm production and hence fertility, and can also cause erectile dysfunction.

But Ramasamy says the results are not surprising. Other viruses, such as mumps and Zika, can cause inflammation in the testes which can affect fertility as well.

“The risk of infertility and erectile dysfunction increases with the severity of an infection,” Nassau chimes in. “I strongly advise every man to get vaccinated.”