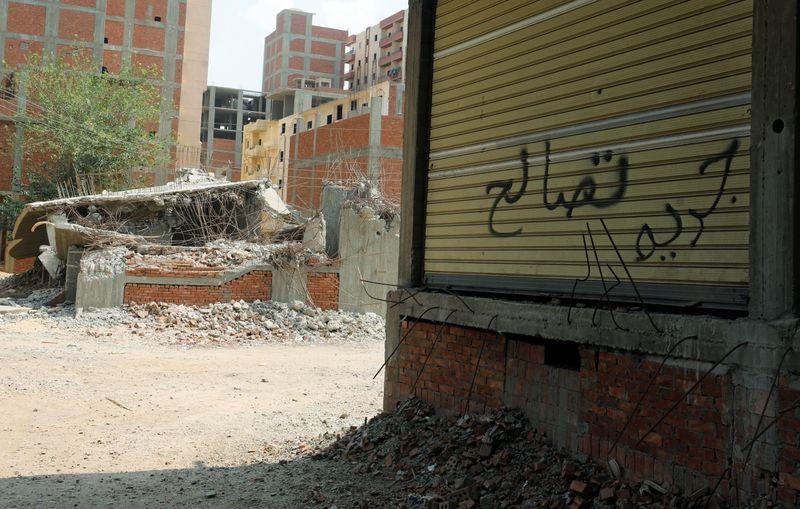 CAIRO (Reuters) – In her village in Egypt’s Nile Delta, 35-year-old Shaimaa Saleh has spent sleepless nights worrying how to raise almost $1,000 to save her unfinished three-storey home.

Like hundreds of thousands of others, and many dependents, she faces a deadline at the end of October by which residents of buildings without permits – mostly in poor areas – must apply to regularise their property for a fee, or face demolition.

Officials say that the law introduced last year is part of a crackdown on illegal buildings that violate safety standards, hinder traffic and development, and encroach on arable land.

It’s part of a drive by President Abdel Fattah al-Sisi to upgrade infrastructure and housing and deal with decades of haphazard construction that accelerated after a 2011 uprising.

But for some residents the demolition threat is a fresh blow after years of economic austerity, rising prices and, most recently, the fallout from the coronavirus.

“I have been struggling to make a living as a farm hand to feed my three children since my husband died in Kuwait last year,” said Saleh, a resident of Defriya village in Kafr El-Sheikh province.

Her husband, who was a construction worker, started building the red brick house in 2014 without a permit and later added two unfinished floors, a typical construction in Egypt where informal housing has long been the norm.

Reuters spoke to a dozen residents in three provinces who said they had struggled to the pay a settlement fee of between 50 and 2,000 pounds per square meter.

Egypt’s state press center did not respond to questions about their plight and the fees.

The government campaign has led to tensions in some communities. In Saryaqos, a village outside Cairo, bulldozers destroyed four informal buildings in late August, before the deadline expired, residents said.

Angry residents threw stones at the bulldozers and workers who were accompanied by policemen, according to four residents and a video posted online.

The housing and local development ministries declined to comment on complaints about demolitions before the deadline.

Local authorities in Qalyubia province did not respond to questions about the incident, but a security official said 15 men had been arrested for rioting.

Egyptian authorities have detained several hundred people in recent days, a rights group has said, amid reports of small, scattered demonstrations against Sisi.

The president has complained that not enough people were coming forward to regularise their properties, and in televised remarks threatened to deploy the army in villages to demolish illegal houses if violations did not stop.

Some residents in Saryaqos told Reuters that they rushed to regularise their property after the incident.

Leilani Farha, who visited Egypt as UN Special Rapporteur on the Right to Housing in 2018 and now heads The Shift, a housing rights group, said the campaign risked indebting the poor.

“Many of the people who are building are of course not wealthy and don’t have the resources to pay a fine. You cannot squeeze water from a stone,” she said.

The campaign has accompanied a military-led construction boom of highways, bridges, new cities and industrial zones that not even the coronavirus pandemic has slowed.

Sisi, who recently ordered the government to build one million housing units, has said every Egyptian who wants a flat will get one.

Prime Minister Moustafa Madbouly said the fees, which can be paid over three years, would be invested in improving infrastructure.

Officials say they are also battling to conserve limited arable land. Egypt’s population hit 100 million this year, 97 percent of whom live on just eight percent of the desert country’s territory along the Nile.

Entire settlements sprung up as builders exploited lax law enforcement in the turmoil that followed 2011. Egypt lost 90,000 feddans of farmland (37,800 hectares) as a result, Madbouly said.

But some residents said they are being squeezed for cash after the state tolerated their housing for years, while others said landlords had sold them apartments claiming they had been built legally.

Three small contractors and owners of high-rise buildings said they had to pay millions to settle their infringements and warned that this would undermine their businesses. One said he had four of his buildings demolished in March.

The government softened its stance in recent weeks by extending the settlement deadline initially set for Sept. 30 by one month and lowering the fees.

Illegal buildings across Egypt almost as severe an issue as GERD, says Sisi