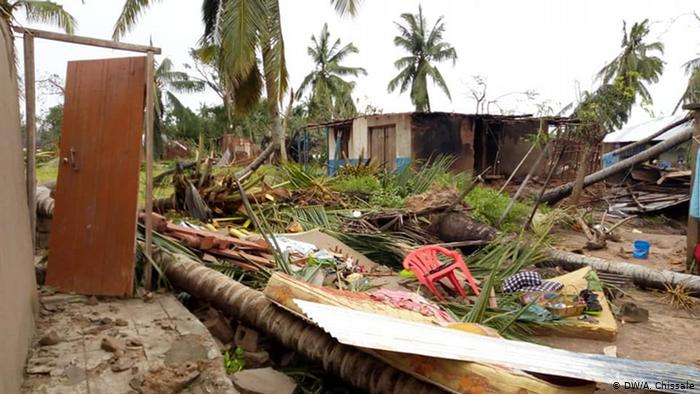 in Mozambique on Monday, Prime Minister Carlos Agostinho do Rosario said the building challenge that faced his country could only be met with outside help.

“So far, it’s OK in terms of food, but we need more for reconstruction, materials, for buildings, for dams,” he told DW’s Adrian Kriesch. “We need to see much more than just food.”

Mozambique’s government is dealing with the aftermath of the arrival last week of Cyclone Kenneth in the country’s northern coastal region.

The storm was described by the UN Office for the Coordination of Humanitarian Affairs (OCHA) as the strongest cyclone to ever batter the continent.  OHCA has predicted further heavy rainfall over the coming days.

According to the country’s National Institute of Disaster Management, 38 people have died. More than 23,000 people were said to be without shelter, with nearly 35,000 homes either partly or completely destroyed.

Many other buildings have been devastated, with fields flooded and roads ruined.

Do Rosario said Mozambique’s government was waiting for weather conditions to improve before sending aid to the more remote areas of the country.

Read more: Mozambique after Cyclone Idai: ‘Some people have not eaten in weeks’

“We are now waiting for the situation to normalize so we can reach the distant places where we have to be,” do Rosario said. “We are prepared to reach the places we need to be because now we have helicopters. Once the weather becomes better we will reach them.”

Cyclone Kenneth made landfall late last Thursday in Cabo Delgado province, packing winds of up to 220 kilometers per hour (about 136 miles per hour). It came some six weeks after another deadly storm, Cyclone Idai, tore through the country, killing at least 600 people and causing widespread flooding.

Before it smashed into Mozambique, Cyclone Kenneth wreaked havoc in the Comoros islands where it killed at least three people and also left many thousands homeless.

38 killed as floods worsen in Mozambique after second cyclone