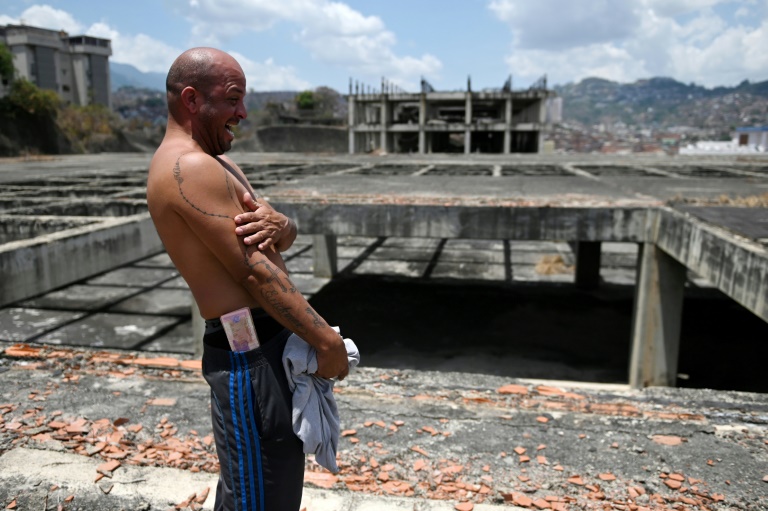 Erick Hurtado wants to escape the abandoned Caracas building that has been his home for eight years, but despite his daily nightmare, he prefers to wait there for the abode promised to him by Venezuela’s embattled government.

That’s the dream shared by 120 people living in Jehovah Gire — the name the residents have given the unfinished building that was initially supposed to house the justice ministry in Petare, one of the capital’s poorest neighborhoods.

Most of those living in the building have been victims either of natural catastrophes or Venezuela’s crippling economic crisis.

“I’ve had enough of living here … if I had somewhere to go, I’d leave this hole,” Hurtado, a 42-year-old moto-taxi driver, told AFP at the building, which offers a view over Petare’s immense slums.

AFP / MARVIN RECINOS A man and a boy take a bath in a makeshift tub carved from the asphalt near Jehovah Gire, a half-finished building in Caracas now home to more than 100 squatters

There’s been no water in the building for the last four months.

The residents improvised by digging a hole in the asphalt road outside to create a makeshift tub where they could wash themselves and their clothes.

A plastic bucket serves as a toilet, there’s electricity only on the ground floor and illness is widespread.

“There are epidemics, mosquitoes, cockroaches, rats,” complained Roni Aranguren, a 42-year-old builder who came to live here with his wife and four children after losing his job and his home.

He has a simple dream: “A worthy house.”

Some 80 children live in Jehovah Gire, but only around 50 go to school and even then they’re often absent due to a lack of transport and food, said Stephanie Marcelot from the Rayiluz NGO, which is helping the residents.

Many children suffer from bloated stomachs, a sign of chronic malnutrition, while cases of dengue fever, scabies and bronchitis are not uncommon.

Over the years, people have forgotten why the building was abandoned. Some say the civil servants refused to work in a neighborhood considered dangerous, says Rayiluz’s Katiuska Camargo.

AFP / MARVIN RECINOS The Jehovah Gire building has been abandoned for so long, people have forgotten why the justice ministry didn’t use it in the first place

There is hope — some former residents have managed to obtain apartments thanks to a government program that has provided 2.6 million homes since 2011, but the opposition claims that figure is inflated.

According to Roberto Orta, president of the Caracas real estate board, 155 mostly private buildings were occupied by squatters between 2003 and 2007, with 241 more expropriated “without compensation” between 2006 and 2008 during the late socialist leader Hugo Chavez’s presidency.

The most infamous illegal occupation was of the Tower of David, a skyscraper that housed 1,150 families between 2007 and 2014 but has since been abandoned.

That building was so notorious as a haven for squatters and gangs it was depicted in the US TV series “Homeland.”

But the Jehovah Gire residents say they don’t want to be viewed as squatters and have formed a cooperative to be recognized as victims.

And they hope to soon be transferred to a housing complex in the Caracas suburbs.

Image: AFP / MARVIN RECINOS Venezuelan Erick Hurtado, with Bolivar bills equivalent to less than a US dollar tucked into his waistband, stands on the roof of Jehovah Gire, a half-done building in the Petare neighborhood of Caracas that is now home to dozens of squatters