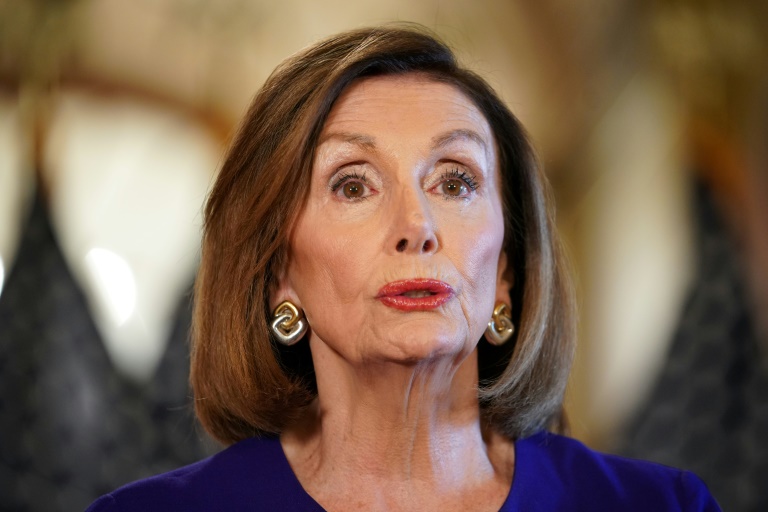 Top US Democrat Nancy Pelosi Tuesday announced the opening of a formal impeachment inquiry into President Donald Trump, saying he betrayed his oath of office by seeking help from a foreign power to hurt his Democratic rival Joe Biden.

The dramatic move — the first step in a complex process that stands little chance of driving Trump from office — pushed US politics into a perilous new chapter just 14 months before new elections for control of the White House and Congress.

Following the bombshell developments from Trump Tower in New York — after addressing the UN General Assembly — the president denounced the inquiry as “Witch Hunt garbage” — while also claiming it would help his re-election chances in 2020.

“The actions of the Trump presidency revealed the dishonorable facts of the president’s betrayal of his oath of office, betrayal of our national security, and betrayal of the integrity of our elections,” Pelosi told a highly anticipated news conference in the US capital.

Pelosi, the speaker of the House of Representatives, and other Democratic Party leaders had resisted taking the step for months, preferring to focus on the coming election fight.

But a combination of the newest allegations that Trump offered Ukraine aid in return for help to damage Democratic White House frontrunner Biden, and a groundswell of support for impeachment among the party’s rank and file, appeared to tip the balance.

“The president must be held accountable. No one is above the law,” she said.

The ramped-up push for impeachment was fueled by a scandal over Trump’s reported attempt to pressure the incoming president of Ukraine, Volodymyr Zelensky, to open a corruption investigation into Biden, and Biden’s son Hunter, who had done business in the Eastern European country.

Triggering the confrontation was an as yet secret whistleblower complaint reportedly centered on Trump’s phone call July 25 with Zelensky.

Seeking to head off the looming impeachment threat, Trump announced Tuesday he would release the transcript of the call.

“You will see it was a very friendly and totally appropriate call. No pressure and, unlike Joe Biden and his son, NO quid pro quo!” he tweeted.

Live news channels played Pelosi’s speech on TV over the lobby bar at Trump Tower, where the president retreated Tuesday afternoon after an intense day of UN diplomacy.

“Such an important day at the United Nations, so much work and so much success, and the Democrats purposely had to ruin and demean it with more breaking news Witch Hunt garbage,” he wrote.

Trump has admitted discussing Biden with Zelensky, but denies he tied hundreds of millions of dollars in aid to Kiev to it investigating the former US vice president.

On Tuesday the US leader said he had frozen aid to Ukraine, but only to force European allies to increase their own support for Zelensky’s government.

Trump’s decision to release the transcript was too little to appease Democrats, who are demanding the White House release to Congress the complaint from the intelligence community whistleblower, believed to contain additional evidence of wrongdoing.

Democrats also want more documents and testimony on other investigations into Trump, on allegations he obstructed justice, illegally profiteered from his position as US leader, colluded with Russia and other alleged abuses.

Setting up more Washington drama, senior Democrat Adam Schiff said the still-unidentified whistleblower, believed to work for one of the US government’s myriad intelligence bodies, could soon testify to the House Intelligence Committee, which he leads.

The New York Times reported Tuesday that intelligence and White House officials were working on a deal for the whistleblower to meet with congressional investigators.

Having held off for weeks, Biden himself declared Tuesday his support for an impeachment investigation.

“If he continues to obstruct Congress and flaunt the law, Donald Trump leaves Congress in my view no choice but to initiate impeachment,” Biden told a news conference. “That would be a tragedy, but a tragedy of his own making.”

Launching an impeachment probe is a politically perilous move, coming just as both parties begin to gear up for next year’s elections.

Now that a formal inquiry has been made, a committee would normally be assigned the task of gathering evidence to support the case against the president.

If the evidence is firm enough, the committee will draft articles of impeachment — formal charges against the president — for the entire House to vote on. They can pass with a simple majority.

From there the process would go to the Senate, where the Republican majority could conceivably block a formal trial of the president. If a trial is held, conviction would require two-thirds of the Senate to vote in support, leading to the president’s removal.

Image: AFP / Mandel NGAN Nancy Pelosi, the speaker of the US House of Representatives, had resisted calls for Donald Trump’s impeachment for months, preferring to focus on the 2020 election

As feud heats up, Trump says Biden was subject of Ukraine call

Tight-lipped Mueller under pressure to call out Trump 'crimes'