A fake news story led to threats of nuclear war between Pakistan and Israel on Christmas Eve.

In an article published by AWDNews on Tuesday December 20, former Israeli Defense Minister Moshe Yaalon was quoted as threatening to destroy Pakistan if it sent troops into Syria.
"We will destroy them with a nuclear attack," the article quoted Yaalon as saying. There is no evidence Yaalon ever said those words.
Pakistan Defense Minister Khawaja Asif responded to the fake news article on his official Twitter as if it were real.
He warned Israel that it was not the only nuclear power.
"Israeli (defense minister) threatens nuclear retaliation presuming (Pakistan) role in Syria against Daesh. Israel forgets Pakistan is a Nuclear State too," Asif wrote late on December 23.

Less than a day later, the Israeli Ministry of Defense responded on Twitter, notifying Asif the Yaalon statement quoted in AWDNews was completely false.
"The statement attributed to (former Defense Minister) Yaalon (regarding) Pakistan was never said," the ministry tweeted on its account.
"Reports referred to by the Pakistani Def Min are entirely false." 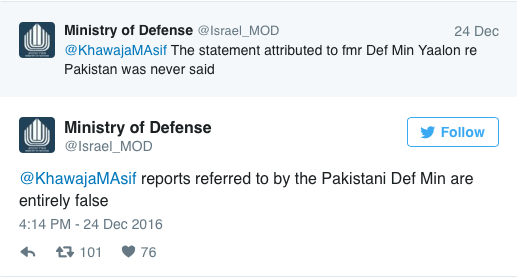 Asif tweeted again, late on Christmas night, saying their nuclear program was only a "deterrence to protect our freedom."
"We desire to coexist in peace, both in our region and beyond," he said.
Fake news affecting real events
The large quantities of fake news on the internet has regularly made headlines in the past few months, blamed with affecting real events around the world.
Most prominently, fake news has been blamed by the United States Democratic Party for helping President-elect Donald Trump win the 2016 United States election.
In December, one month after losing to Trump, Hillary Clinton called fake news "an epidemic."
"This is not about politics or partisanship. Lives are at risk, lives of ordinary people just trying to go about their days to do their jobs, contribute to their communities," Clinton said, speaking at an official event in Washington.
Just days before she spoke, a man was arrested with an assault rifle at Comet Ping Pong pizza restaurant in Washington, DC, which had been falsely accused in fake news stories of being involved in a child sex operation.
On December 15, Facebook announced it was going to start labeling "fake news" stories.