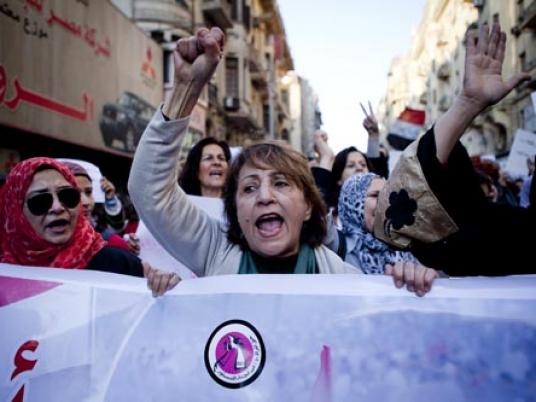 The picture of a women's rights pioneer was deleted from a high school textbook because she was not wearing a hijab, prompting fierce condemnation from political parties, human rigths organizations, feminist groups and a number of public figures.

The 2013-2014 school year edition of the National Education textbooks for Grades 11 and 12 were edited to delete the picture of Doriya Shafiq and pictures of those killed during the 25 January revolution.

In a statement Sunday, the organizations and parties opposed to the move also condemned the statements of Mohamed Sherif, philosophy and national education adviser to the Ministry of Education, who told the privately owned Al-Dostour that Shafiq's picutre was deleted after "some religious satellite channels" objected to her not wearing the hijab.

Sherif added that protesters' pictures were deleted so as not to "provoke the feelings" of Egyptians.

“The ministry does not receive any instructions in the process of curriculum development,” he said, claiming that the changes “have nothing to do with the alleged 'Brotherhoodization' of the curriculum and education.”

Sherif further added that the changes were made to suit public opinion and the opinions of Islamic groups such as Al-Azhar, the Islamic Research Academy and the Endowments Ministry.

The opposition statement said that the ministry’s changes and the official's remarks are “unacceptable behavior in dealing with the Egyptian citizen, especially Egyptian women.”

Doriya Shafiq is one of the pioneers of the women's liberation movement in Egypt from the first half of the 20th century. She campaigned for the rights of Egyptian women to vote and stand as candidates to be included in the 1956 Constitution.

Aside from campaigning against the British presence in Egypt, Shafiq also was a researcher and founded literary journals. She was granted a PhD in philosophy from the Sorbonne in France in 1940, after writing a thesis titled "Women in Islam, which claimed that women have twice the rights under Islam than they do under any other legislation.