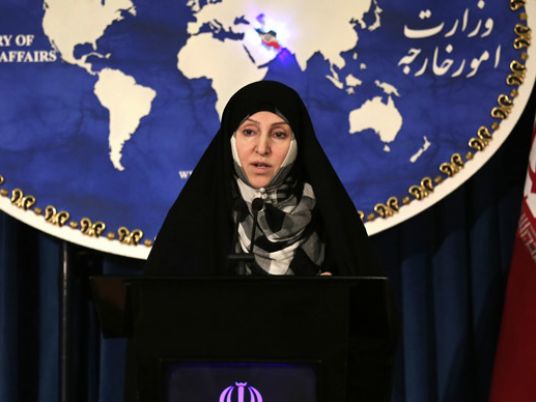 Foreign Ministry Spokesperson Badr Abdel Aaty said that the Egyptian charge d’affaires to Tehran delivered the strongly worded letter of protest to officials of Iranian Foreign Ministry to stress rejection against Iran’s interference in Egyptian local affairs.
Iranian News Agency IRNA had quoted the Iranian foreign ministry spokesperson, Marzieh Afkham, as saying that Tehran is deeply concerned over recent clashes in Egypt between security forces and supporters of deposed President Mohamed Morsy, which have led to killing and injurying several Egyptians.
Abdel Aaty highlighted necessity of respecting sovereignty of countries and its decisions, especially since Egypt does not interfere in Iranian issues.
Cairo condemned remarks by the Iranian charge d’affaires in Egypt, Mujtaba Aman, as well as the Iranian foreign ministry spokesperson, over Egyptian affairs, Abdel Aaty told Al-Masry Al-Youm, adding that the remarks have been totally rejected and that they intentionally ignore the situation in Egypt.
In a press release on Wednesday, Abdel Aaty said that what the Iranian spokesperson’s comments on Egyptian local affairs shows her country’s unfamiliarity with principles of international laws, relations and the UN charter which all ban interference in local issues of other countries.
Egyptian informed sources say the linked statements by the three capitals of Doha, Tehran and Khartoum are all trying to take advantage of the local situation in Egypt to tarnish steps taken by Egyptian government and derail Egypt’s political roadmap. The sources said that Cairo will not pay attention to such attempts and will move forward to achieve the roadmap set forth at the 30 June uprising, whose first steps began on Wednesday as Egyptians abroad commenced voting on the referendum on constitution.
Edited translation from Al-Masry Al-Youm