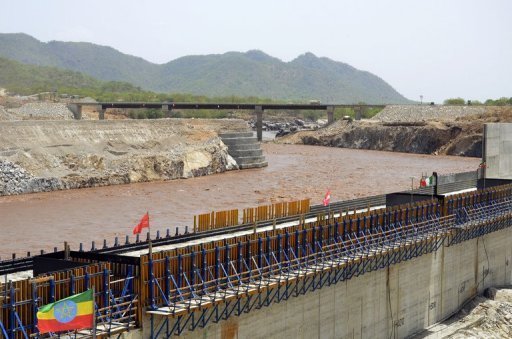 Egypt's foreign minister is to hold talks in Addis Ababa on Ethiopia's plan to build a Nile dam that has stirred "life or death" concerns over water resources, the premier announced Monday.

Hisham Qandil told the Senate, taking the place of parliament until a new National Assembly is elected, that Foreign Minister Mohammed Kamel Amr would travel to Ethiopia "in the coming days to give the Egyptian point of view" on the project.

"Water is a question of life or death for the Egyptian people. Water is a matter of national security," he stressed.

"Egypt's share of the Nile that is 55 billion cubic metres does not meet the daily needs of Egypt and its needs for growth. Egypt entered a phase of hydraulic poverty five years ago," the premier said.

While acknowledging that its allocation was fixed, Qandil said the rising needs posed "a great challenge to economic and social stability".

Ethiopia has begun diverting the Blue Nile some 500 metres (yards) from its natural course to construct the dam, sparking anger from some Egyptian politicians.

The Blue Nile joins the White Nile in the Sudanese capital Khartoum to form the Nile which then flows through Egypt.

Last week, Egypt said it would demand that Ethiopia end construction of the massive dam, which is being built at a cost of $4.2 billion.

Cairo believes more studies are needed of the dam's impact on its water supply which is almost entirely dependent on the Nile.

Egypt says its "historic rights" to the Nile are guaranteed by two treaties from 1929 and 1959 which allow it 87 percent of the Nile's flow and give it veto power over upstream projects.

But a new deal was signed in 2010 by other Nile Basin countries, including Ethiopia, allowing them to work on river projects without Cairo's prior agreement.