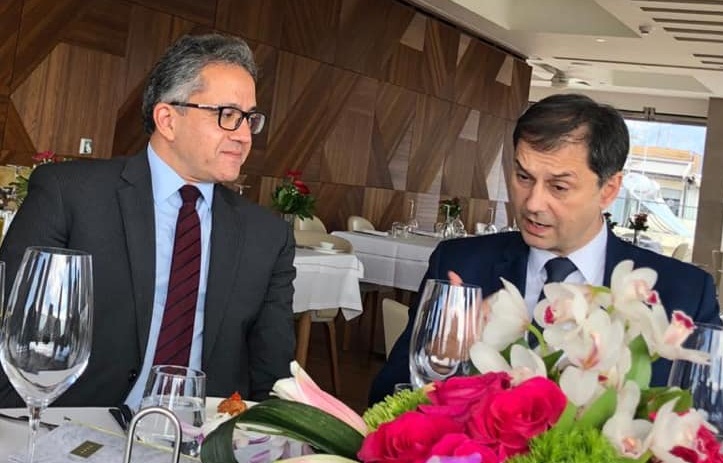 Egyptian Minister of Tourism and Antiquities Khaled al-Anani met with his counterpart in Greece Harris Theocharis in the Greek capital of Athens on Friday, to discuss developing maritime tourism and organizing joint tourism programs between the two countries.

A statement by the Egyptian Ministry of Tourism and Antiquities said that Anani went to Greece to meet the Greek ministers of tourism and culture upon an invitation from Greece.

The meeting also comes in light of the trilateral cooperation agreement signed in 2017 between Egypt, Greece and Cyprus in the field of maritime tourism.

Anani and Theocharis discussed joint cooperation in the field of tourism, highlighting the cultural significance of Egyptian sites and ports.

The meeting also discussed how promoting this type of tourism, in light of the presence of a number of historic Coptic churches and monasteries in Egypt, could boost cultural and religious tourism among Greek visitors.

In January, Egypt’s Ministry of Tourism and Antiquities announced that a number of sites, churches and monasteries along the path following the Holy Family’s journey in Egypt have been restored and opened to visitors, amid ongoing efforts to boost cultural and religious tourism in the country

During the meeting, the two ministers also discussed how to go about creating an integrated tourism project between the two countries, which the two sides said would be marketed in international tourism forums and on social networking sites.

The two ministers also agreed to hold a bilateral meeting in Egypt as soon as possible to complete the talks, in addition to the work of a joint workshop in Egypt where Greek tourism experts will meet with their Egyptian counterparts in hotels and tourism companies across the country, with the aim of exchanging expertise and reaching an agreement on joint Greece-Egypt tourism programs.

In February, head of the Cultural Tourism Marketing Committee in Luxor Mohamed Othman announced that Spain’s Iberia Airline flights will resume flights to Luxor starting April 2020, returning Spanish tourism to the city after a 12-year suspension.

In December 2019, the first UK flight to Sharm el-Sheikh since the 2015 ban landed at Sharm El-Sheikh International airport, and low-cost airline EasyJet also announced that it would resume flights between the UK and Egypt’s Sharm el-Sheikh in June 2020.

Russia also suspended flights to Egypt following the 2015 Russian airliner bombing in Egypt’s Sinai Peninsula, but in 2018, Russia’s largest airliner Aeroflot resumed flights to Cairo, and in late January 2019, a Russian security delegation charged with conducting an inspection tour of the airport praised beefed-up security measures taken in Terminal 2, which included the installation of an explosive detection device. The visit is part of the process for the resumption of regular charter flights from Russia to Egypt’s resorts along the Red Sea.

An economic adviser at the World Tourism Organization and member of the UN Economic Commission for Europe Saeed al-Batouti said previously in an interview with the MENA News Agency that 15 million people will visit Egypt in 2020.

According to some officials, the recovery of Egypt’s tourism sector is due to efforts by the political leadership to support and promote the tourism industry, as well as improvements to the security situation and moves by officials to tighten security measures at airports across the country. A report from Reuters has also cited the flotation of the Egyptian pound in 2016, which reduced its value by half, as another attractive point for foreign visitors.