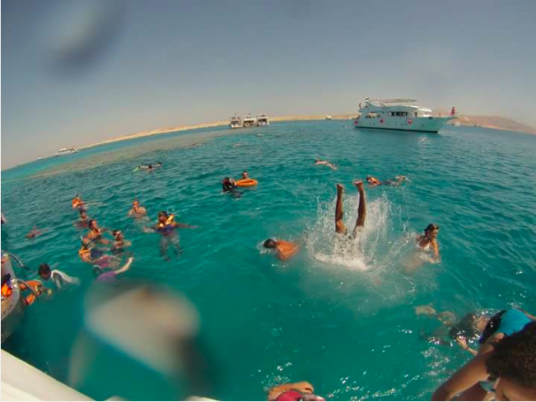 Egypt’s Tourism Minister Yehia Rashed is holding a series of meetings with representatives of the Thomas Cook airline company in London as part of ongoing contacts with British decision-makers to review travel restrictions to Sharm el-Sheikh amid demands by British tour operators and parliamentarians to resume trips to the resort.

Amr al-Ezaby, director of Egypt’s Tourism Office in England announced said on the sidelines of a press conference with London journalists that a promotional tourism campaign for Egypt in the English market is set to launch in January 2018. It is scheduled to continue throughout the first quarter of that year.
The campaign will start in public squares and the famous streets in London, he pointed out.
Ezaby said that about 40,000 British tourists have visited Sharm el-Sheikh despite the travel ban imposed by the British government.
Ezaby went on to say that Egypt was announced as the best dive tourism destination at the Birmingham Dive Show in October, adding that the title reflected the maintained interest of English tourists in Egypt.
Meanwhile, Hisham al-Demiry, chairman of the Tourism Promotion Authority, said indicators show an anticipated improvement in the flow of tourism to Egypt, stressing that he held a series of professional meetings with tour operators from the English and German markets during which they expressed willingness to organize trips to Egyptian resorts.

The UK airline company Thomas Cook resumed flights to Marsa Alam Airport on October 21, after a nine-year suspension of flights to the city. The airline operates two flights weekly during the winter season, from the cities of Birmingham on Mondays and Gatwick on Thursdays.

The company advised its customers on its website to spend their holidays at the resorts of Marsa Alam and Hurghada highlighting available diving trips and ideal weather.

The company is expected to operate more flights with the start of the winter tourist season in November.

Egypt’s tourism sector, representing approximately 12 percent of the economy, has experienced significant problems in recent years, particularly since the downing of a Russian civilian aircraft over the Sinai peninsula in October 2015, which killed all 224 passengers on board. Russia, along with a host of European countries including the UK, suspended flights to Egyptian resorts after the incident.