The Public Treasury Authority along with the  Finance Ministry has minted  a silver LE 100 coin as a memorial currency on the occasion of the launch of the Climate Summit COP27.

The ministry started selling the coin at its pavilion in the Green Zone for LE 750.

On the reverse of the coin, the figure of the LE 100 pound appears.

On the front a logo of the Climate Summit and the name of the conference is inscripteded in both Arabic and English. 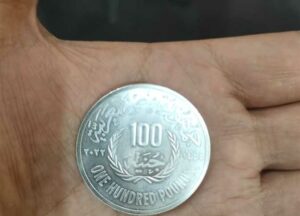 The LE 100-pound coin is not the first of its kind to be minted highlighted extra-curricular events that the country is holding.

Since Sisi took power, the Egyptian government has documented several national projects on the back of coins.

This process will be starting with minting new denominations, to eventually changing the inscriptions of current coins.

Al-Masry Al-Youm mentions the most famous national projects that were minted on coins:

The National Road Network coin was minted after Egypt ranked 75th up from 118th in improving the road and bridge network.

It is considered one of the first projects that was minted on coins, as President Sisi inaugurated the new Suez Canal with a 35-kilometer-long branch running parallel to the original Suez Canal, which is 190 kilometers long.

The New Administrative Capital’s coin was minted on the pound as a new shift in the history of Egypt, as its area exceeds the size of the state of Singapore, and it will be linked to the railway and high-speed train.

It is one of the most important development projects, and the work of the plan was implemented within 8 and a half months, in an unprecedented achievement that included many power plants.

One of the fourth generation cities, and its unique location will make it Egypt’s gateway to Africa, as it is witnessing an unprecedented rate of projects, and has attracted international companies to invest in it.

The site was selected based on studies and reports by NASA.

The project was established to contribute to improving the irrigation situation in the Middle Egypt region.

The coin recreations are an exciting new way to celebrate Egyptian achievements in many fields of practice and especially globally.