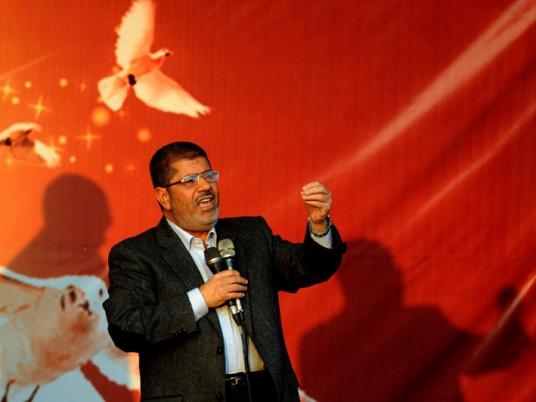 To Egypt's opposition, a court ruling throwing the electoral process into limbo offers an opportunity to force Islamist President Mohamed Morsy into compromise as the country heads towards chaos.

Leaders of liberal and leftist parties believe the delay to parliamentary elections is a chance to extract concessions on major constitutional issues from Morsy – and possibly to back out of an opposition boycott that may backfire.

"Let's think about this without being stubborn … Halting the election is beneficial for everyone," said Conference Party leader Amr Moussa, a former Arab League chief.

"The time we will be given by the decision to halt it will open the door to many possibilities, a lot of them positive and hopeful," he told the state MENA news agency, describing the court's decision as a "gift from the sky".

Wednesday's Administrative Court order canceled Morsy's decree last month calling lower house elections, and sent the electoral law under which they were to be held back the Constitutional Court, the nation's highest legal authority.

The election committee followed up on Thursday by cancelling the timetable under which Egyptians should have voted in four rounds lasting from April 22 to late June. Now no one knows when the polls will be held, with much depending on what the Constitutional Court decides, and how long it takes.

On the face of it, the shambles could not have come at a worse time: the euphoria that followed the fall of Hosni Mubarak two years ago has long gone.

"We have a very dangerous economic situation and even before the Administrative Court's decision … the security situation was very bad," said Hassan al-Nafaa, a professor of political science at Cairo University and campaigner.

However, he added: "If it is taken as an opportunity for the president to postpone the election and call for reconciliation, that will be a gift for the country to get out of this very deep crisis."

Morsy's Muslim Brotherhood has lost popularity due to the state of the nation but still has an effective campaigning operation that has won every vote since the 2011 revolution.

"The court decision … could be the only way out of the current political crisis but that will depend on the desire of the government to engage the opposition in serious talks," said Mustapha al-Sayyid, a professor of politics. "I doubt this will happen, given how the opposition has been completely excluded from any important decisions taken by the government."

Nevertheless, Morsy is under pressure to compromise both at home and from Egypt's major ally, the United States. Secretary of State John Kerry made clear in Cairo earlier this month that consensus was vital for securing a $4.8 billion loan from the International Monetary Fund to get the economy back on its feet.

That consensus is currently non-existent, throwing into doubt the IMF deal that was agreed in principle last November but put on hold at Cairo's request due to street violence.

Egypt cannot hold out much longer without help. Its foreign currency reserves have dropped to a critically low $13.5 billion, little more than a third of where they were in the last days of Mubarak, while the Egyptian pound is falling and the budget deficit soaring to unaffordable levels.

"The IMF is unlikely to want to grant a loan while there remains significant upheaval and lack of any form of political consensus," said Jason Turvey at Capital Economics in London. "This uncertainty will further weigh on the Egyptian economy, which is already very weak, and possibly lead to further capital flight and greater pressure on the pound."

Given the lack of clarity, the IMF may be reluctant even to extend temporary bridging finance. However, the United States, the IMF's biggest shareholder, may regard Egypt as too big to fail. It is an ally in a turbulent region and the Arab world's most populous country.

Many Egyptians say the feuding between the Islamists and opposition, which frequently spills over into street violence, is damaging confidence.

Ezzat Saad, governor of the historic city of Luxor, said it was also frightening off tourists, a major source of foreign currency and jobs for Egyptians. "We are unfortunate in Luxor because we are paying the price of what our brothers are doing in Cairo," he said.

Under Morsy's abandoned timetable, the new parliament would not have met until early July. With domestic politics paralyzed, this meant little would probably be done to tackle the dire state of the economy, and secure an IMF loan, for four months.

Most of the opposition hadn't planned to participate anyway.

Last month the National Salvation Front (NSF), a group of parties united in their dislike of the Muslim Brotherhood, announced the boycott. Former U.N. nuclear agency chief Mohamed ElBaradei, one of its internationally best known figures, said he would not be part of an "act of deception".

Perhaps the opposition had no choice. Morsy gave little ground on their demands, including the formation of a broad-based government, changes to the electoral law and revisions to a new constitution produced by an Islamist-dominated assembly.

With violent protests erupting frequently, the opposition says now is not the time for elections. Khaled Dawoud, a member of the Dostour party and spokesman for the NSF, called on Morsy to compromise to avoid further bloodshed.

The opposition would be ready to reconsider its decision were Morsy to compromise, he said.

"We did not choose this boycott in the first place and of course we are ready to take part in elections – if we have a reasonable electoral law agreed upon by all political parties and if we have proper security conditions that would enable elections to take place," Dawoud told Reuters.

The refusal to participate is contentious even within opposition ranks, with some saying it would give Egyptians little choice but to vote for Islamists of one shade or another.

"The Front's decision to boycott elections means that we will be delivering the country to the Muslim Brotherhood on a silver plate," said Mostafa al-Naggar, leader of the leftist Justice group that refused to join the boycott.

Opposition tactics have raised eyebrows abroad. "If they want to engage, if they want to assure that their views are taken into account, the only way to do that is to participate," said a U.S. official who accompanied Kerry on his Cairo visit.

Morsy's appetite for compromise may be limited. "I don't think the Brotherhood will spare any important ministerial or governmental positions for the opposition," said al-Sayyid, who teaches at Cairo University.

At most, Morsy might accept token opposition representation from a party such as Wafd, which was in parliament during the Mubarak era but offered little resistance to the then ruling National Democratic Party, which has since been disbanded.

Wafd, which was founded in 1919, says it will stand by the rest of NSF, which represents secular Egyptians, minority Christians and those Muslims who fear Islamist rule.

The NSF has major philosophical differences between its socialist and pro-business members. But it says it is determined to stick together after last year's presidential elections when a number of opposition candidates ran.

"Had we been united then and run under one candidate instead of many, we could have won the presidency," said one NSF member.

United or not, if the opposition decides to participate in the election it will face an Islamist operation backed by a social network providing goods and services to the poor.

Few opposition leaders, apart from leftist Hamdeen Sabahy who came a close third last year, have much appeal. ElBaradei is an internationally respected diplomat who won the Nobel Peace Prize and yet he dropped out of the presidential election.

Prominent Egyptian thinker and writer Youssef al-Qaed said the opposition needed one leader to unite behind. "And they have to talk to people in simple ways and language that the poor and uneducated could easily understand," he said.