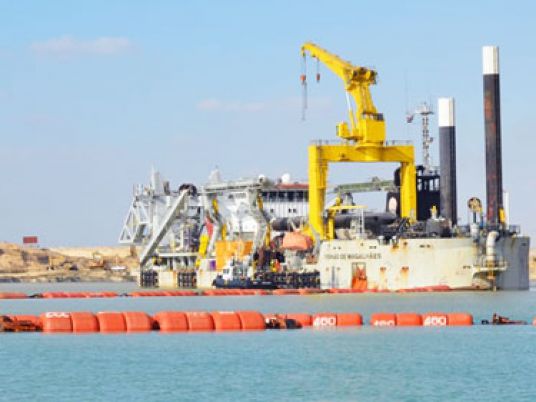 Twenty dredgers are currently working in the new Suez Canal, managing to finish underwater dredging operations for 24 million square meters, said the canal’s authority chief.
Lit. Gen. Mohab Mamish, head of the Suez Canal Authority, said Sunday that the operations at the new canal, which Egypt seeks to finish digging by August, are carried out by dredgers from the authority, UAE’s National Marine Dredging Company, Dutch companies Van Oord and Boskalis, Belgian Jan De Nul and DEME and US Great Lakes.
Mamish, in statements published by the authority’s website, said works in the project are continuing non-stop to finish it according to schedule.
Mamish had noted in earlier statements to Al-Masry Al-Youm that the new canal will increase the capacity of the current canal to allow the passage of 97 ships, up from the present 49, therefore doubling revenues by 259 percent to LE13.226 billion per year.
Egypt’s Suez Canal revenue rose to LE39 billion (US$5.5 billion) in 2014, that is LE4 billion or 11.4 percent higher than 2013, Mamish said in press statements last week.